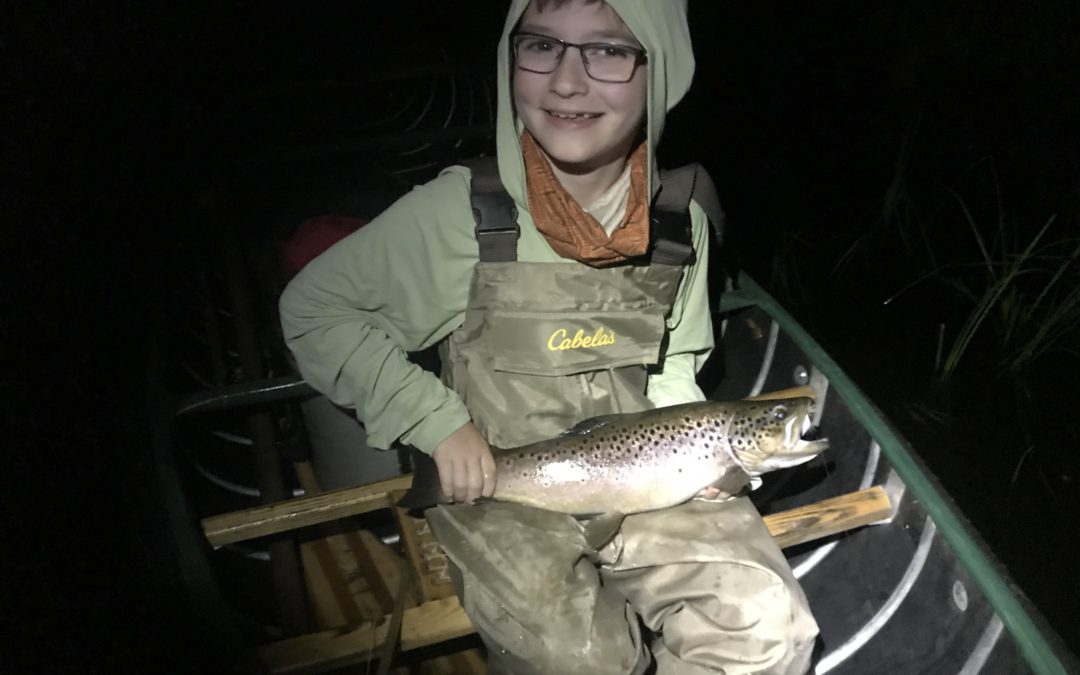 Admiringly we refer to this season as the second season.  The hex are not gone but they are going, the tricos are not going but they have arrived.  The slate wing olives are trickling off in the morning, and the Isonychias are hatching out of the riffles, and the deer flies are nesting under the cedars and bridges, and the midnight trout are considering eating mice and frogs and moths, and the…well, the list keeps going.

There is fly fishing every hour of the clock.  Wanna wake up and nymph fish at dawn?  Do it.  Wanna chuck skunks at the log jams?  Now is the time.  Want a big trout?  Tie on a Gurgler at dusk.  Want to see dozens of rising trout?  There’ll be there in the morning and the evening.  The cold creeks will hatch their “June” mayflies the next two weeks…they always run behind.   Some anglers will chase hex from one watershed to another, hopping from crick to crick, right up the state.  The rest of us will still find a few hex here or there (there was a good flight on the South Branch two nights ago) but it’ll be intermixed with other pursuits. 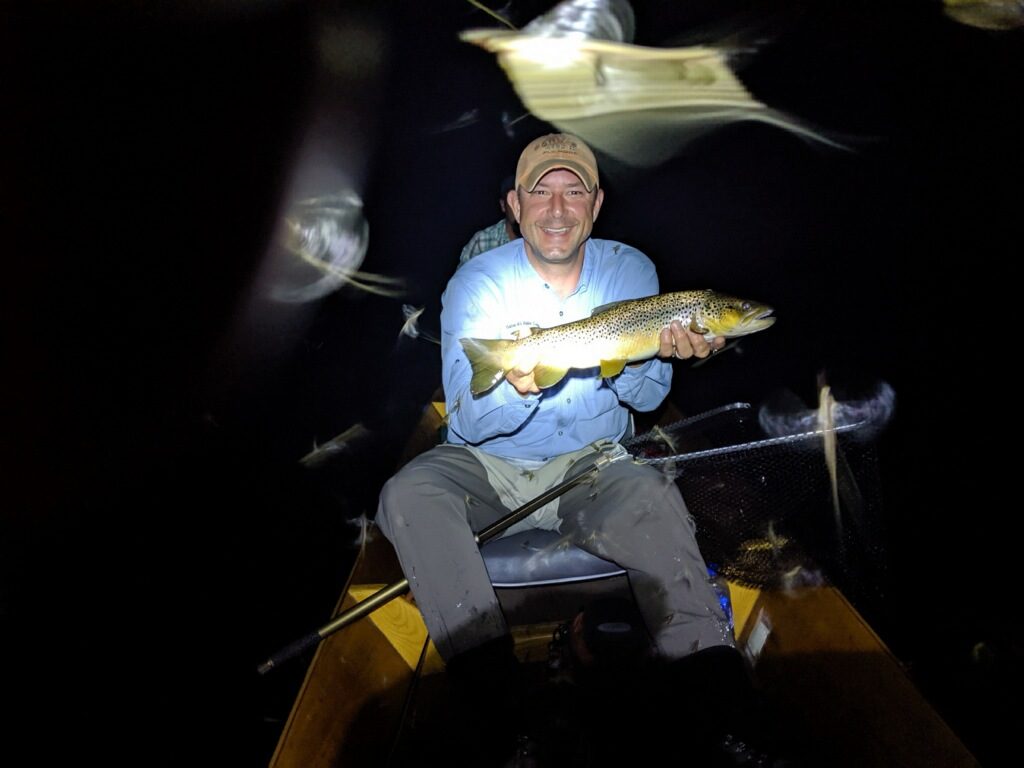 For a change of pace, Sheets and I hopped in the riverboat for a daytime run.  It was a fun, hot, clear, sunny day…the only haze courtesy of some Canadian wildfires.  The trout weren’t tuned in, or we weren’t tuned in, but we caught fish on dries, nymphs and streamers, caught fish mostly on the foamy little drop-offs and the cuts behind the weed beds, and had a great time.  I hadn’t fished from the back of the riverboat in awhile and managed a few complex tangles.  I sure did miss this July stuff.  I first met the Au Sable in July two and a half decades ago.  We caught fish on some cool new foam and beads we have in the shop.

The hex?  I’m pretty well finished with them, and had a great year (I say this every year…and I’ll probably be out tomorrow night).  There is still another week of bugs.  On the Au Sable, the last hex will be in the cold water spots, they will be smaller (or the fish seem to prefer smaller bugs), and should be fished on 3x.  We carry these smaller hex in the shop and they really do work.  I’ve even, in desperation, fished brown drakes for these late hex and done well. On the Manistee, the hex will sputter on throughout the month.  They will disappear and reappear unexpectedly.  I hit them last year on July 27th, the day before the Canoe Marathon, on a mousing float.  So this year…maybe they’ll last into August?

The late spring meant the hex lasted long enough for me to squeeze in a couple floats with my oldest son Holden, now that he’s on summer break.  He’s got the fishing gene, though his proximity to fishing makes him a little less hungry for it than his Ohio-born father was at his age.  The first night he went through all the 8-year-old stuff — tired, hungry, mosquitoes — but the rising trout silenced that.  He struggled to set the hook hard enough to keep them pinned.  The bugs were pouring off the river.  Finally near the end of the night I helped him on the hook-set and he fought and landed a nice big fish well after midnight.  That lit the hex fire.  He didn’t fall asleep until about 2 am.  He was jacked.

The second night was much different — no complaints, no Chex-Mix, nothing.  We had a gentle hatch and the trout were eating every one of them.  We worked one run and he hooked all the big fish rising but, still, couldn’t set the hook hard enough to keep them on.  I think he lost five big fish within the first few headshakes.  On the last trout at the bottom of the run, the one beneath the cedars, I could tell he was determined.  I slid the boat down on the fish.

After the cast and mend he put both hands on the cork in serious prep.  The fish ate, and before I could yell “set” he reared back and buried that hook into a dandy trout.   He fought it well.  Perfectly.  My wife says you’d think he was asleep and I plopped a trout on his lap…except for the smile. 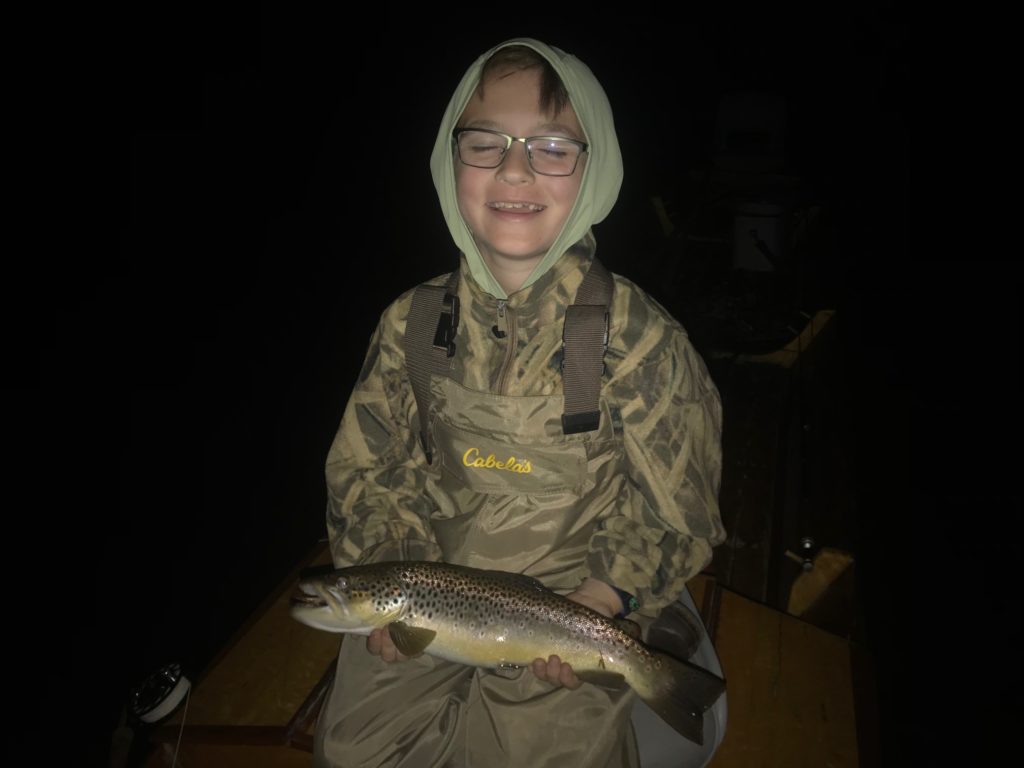 I’ve never understood why July is considered by some to be the “off-season” on the Au Sable.  While some lament the lack of a “main event”, I see it as a series of smaller events, any of which can be replaced with other pursuits, be it popping for bass, or even heading to the fresh water flats for carp. 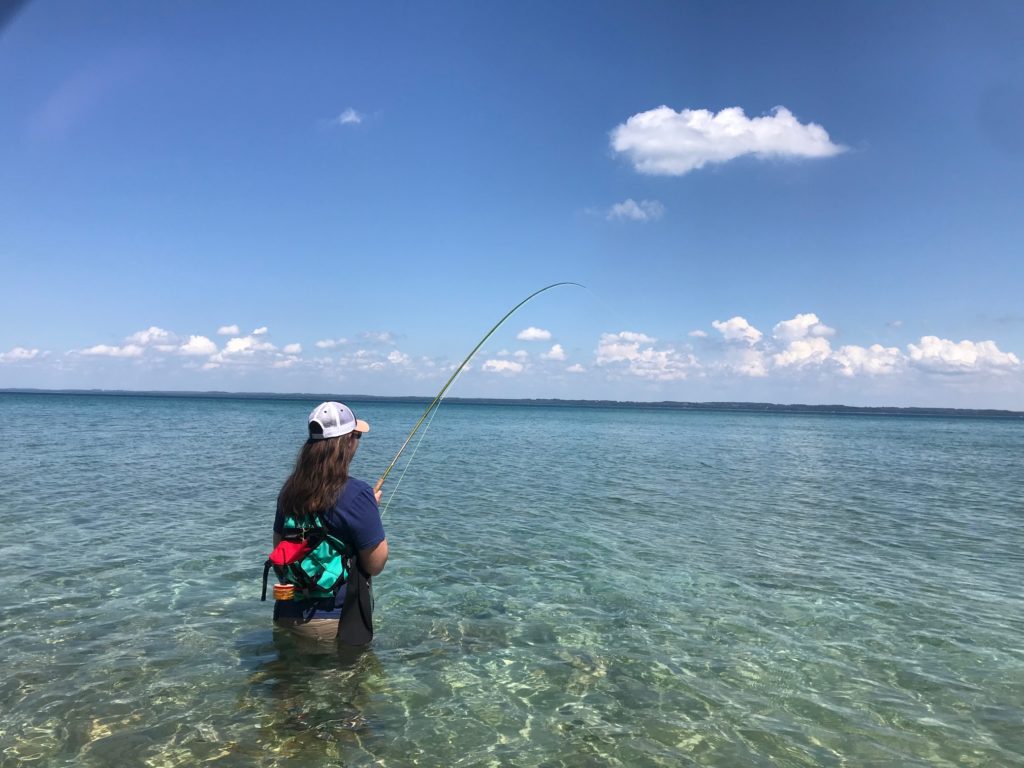 For those visiting the Au Sable this weekend, we should see the tricos continue to spread through all three branches (cold mornings…be on the water by 8:30 am.  Warm mornings, 5:30 or 6 am is best), the very underrated slate wing olives (size 18, hatch in the morning, spin in the evening), the green curse (microscopic BWOs that hatch in the late afternoon and spin in the evenings), the Isonychia (another week or so of these big bugs), the hex should produce a few more banner nights, deer flies, the arrival of the light cahills, the micro caddis, and we even had some cinnamon flying ants this past week.  Stay diverse!  Experiment.  Enjoy.  It’s July, the most underrated month of the year.

Many of you have expressed the desire for a more comprehensive one-day fly fishing casting class.  This is it.  One day devoted entirely to making you a proficient fly caster.  The goal is simple: regardless of starting ability, you’ll leave this class able to cast.  Includes lunch.  More details here.

Have you ever seen so many people who think going fishing at midnight with a box full of mice is cool? Neither have we. So we celebrate it: a night fishing one-fly “competition.” Every year we raise well over $1000 for the Headwaters Chapter of Trout Unlimited. This is a fun event. Not a serious competition…though we do offer some real prizes through our partnerships with Hatch Reels and Sunrise Distributors. Includes a huge barbecue at 7 p.m., music, and the infamous mailbox challenge. The bell rings at 8 p.m. Anglers may fish anywhere on the Au Sable and Manistee Rivers, but must return to the lodge by 3 a.m. with a picture of their RELEASED trophy. The Derby is open to everyone and anyone, from guides, to those being guided, to folks casting off their docks, and anyone else who wants to go night fishing for a good cause. $50 per team of two people.  Email [email protected] to sign up.

The Anglers of the Au Sable sponsors this annual event. This is our 7th Kids One-Fly (Box) Challenge for anglers 17 years and younger. All participants will receive a complimentary fly box with donated flies and, if needed, volunteer chaperones to take them to the river (or pond, or lake, or creek) for a morning of fishing. Awards! Prizes! Anglers must use the flies in their box of choice. We do this because kids are awesome, and a kid fly-fishing is even awesomer. Our favorite event of the year. We’ll meet at the lodge at 9 a.m.. Kids receive instruction and a casting lesson from FFF Certified Instructor Mark Hendricks. At 10:30 a.m., we go fishing! Meet back at the lodge between 12 and 2 p.m. for lunch, drinks and awards. We try to have enough rods and waders for youth participants, but encourage those that have their own to bring them.