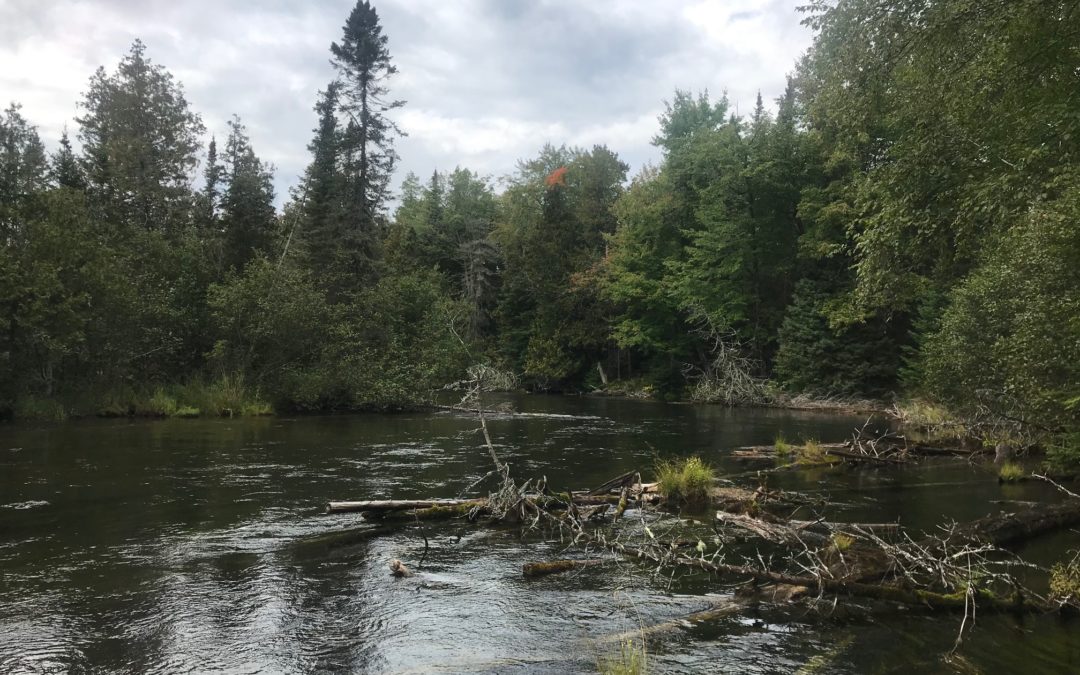 Openings this weekend: We have a few openings this coming weekend due to a large cancelation.  Given the ants, the fall Isos, the first changing leaves, and the pretty great dry fly fishing (for September, at least), it’ll be a pleasant weekend to be up north.  The river is quiet this time of year…and pick a spot, any spot, and there’s a really good chance you’ll own it, at least for an afternoon. 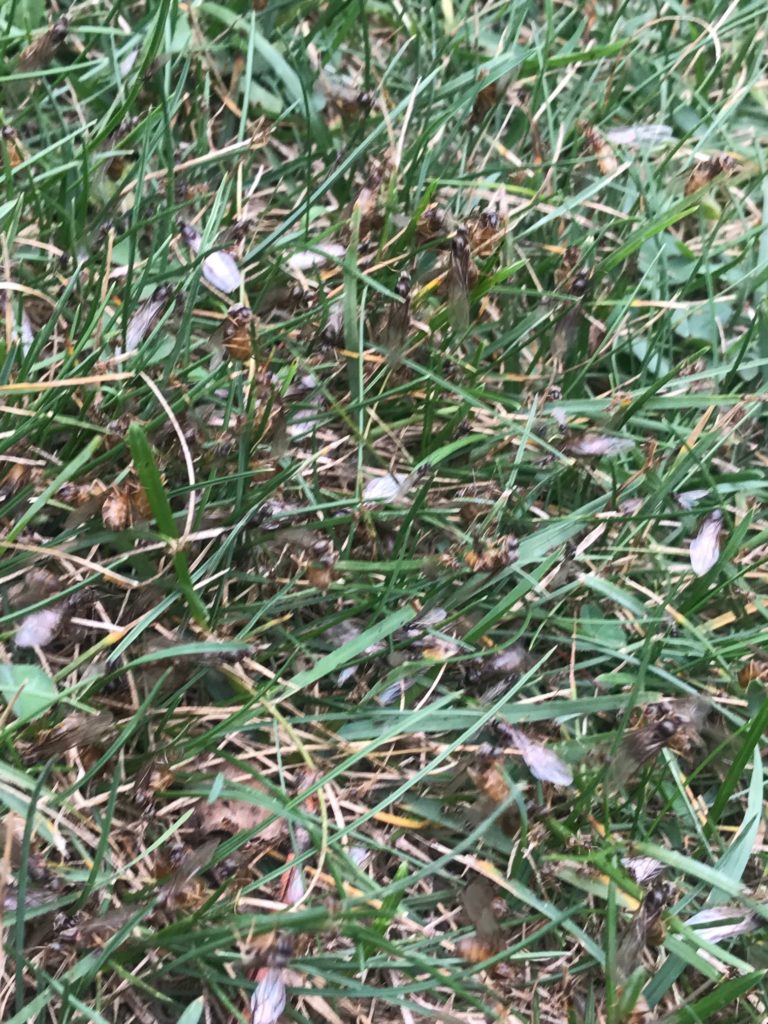 We had a long, great weekend, complete with some tall tales surrounding the Au Sable River Cleanup, which spanned all three branches, the big river, and the Trophy Water section below Mio dam.  One of the best stories was told around the campfire late that night, and it happened to my friend and writer John Bebow…

Sometimes you just feel it, though you’re never exactly sure what ‘it’ will be.

It wasn’t the fishing conditions: sunny, breezy, the lowest and clearest water we’d seen all year, nothing all afternoon beyond a few dumb stockers in the Big Water below Mio. Still, as I stripped yet another unmolested streamer through the long shadows, I declared it out loud.

“Chris, there’s a charge in the air. Something’s going to happen.”

Another half-hour of futility, and I no longer felt the mojo. The second drifter in our three-boat parade went by with the boys declaring a row-out, content their tale of a double bass hook-up would set the standard at the campfire… 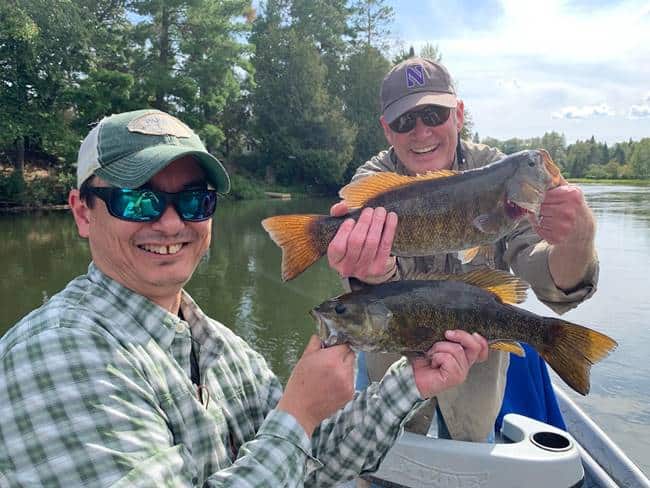 I liked the sound of a row-out. It had been a long River Cleanup day, lengthened by an even longer Friday night to kick off the annual TankerPalooza weekend out at Pirate Camp.

I took the oars again and before I could nudge some forward strokes into the conversation, Chris stood up and launched more streamer casts. ‘Launch’ is a kind description. He came to the Big Water with his wispy four-weight. The only streamer it would adequately cast was an unweighted yellow Clouser minnow that, when stripped, fluttered just a few inches below the surface.

I was thinking dinner – or lack of it – and staring off toward the south bank as Chris cast uneventfully short of the north bank. Until everything changed in one violent swirl.

Chris reared back and the four-weight bent into spasms as the fish ran upstream. All I could see in the sinking sun glare was fly line spray as it cut through the current. Then it stopped. But we didn’t. Paralyzed by shock, I’d stopped rowing in the heavy current. We drifted downstream. The fly line stayed taught, unmoving. Ten yards upstream. Twenty yards upstream.

I dug in and sweated out the last of Friday night’s vodka. Backrow after backrow yet we barely moved. Finally, I got us to the bank, got purchase on the current and drew even with where the fly line disappeared. Two feet below the surface the trophy brown trout waved briefly in the current then sank below a root ball, leaving Chris’ fly line bird-nested in the submerged wood.

I dropped anchor so Chris could study the problem and I could catch my breath.

“Pound the bottom of your rod like it’s a ketchup bottle,” I coughed.

The vibration briefly stirred the fish. Then he disappeared again.

We sat above the root ball, tried to panic the fish with splashing oars, and steadily lost the anchor hold. Rinse and repeat. Downstream we drifted, picked up anchor, repeated the painful backrow. Anchored again.

“I think he’s still on,” Chris said, staring into the current like a heron.

We just sat there for, oh, I don’t know. I have no idea. Time stopped ticking.

“Chris, how badly do you want this fish?”

“Well then, you’re going to have to go in after it.” 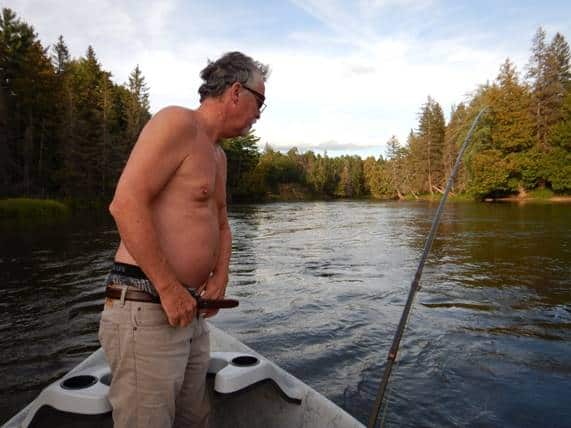 Over the side he went wearing only his Hanes fishing boxers. The look on his face said “myocardial infarction” but after a couple cold whimpers he made his way around the bow, took one last look, and dove under to save both fly line and fish. Arms and legs, arms and legs. Pure flail. By the time he poked his head above the current he was a dozen feet downstream.

Right about then the third drifter in our parade came around the bend.

“What are they doing?”

“I think they’re working a fish. Oh, wait… Chris is in the water. Uh… Uh… What the hell are you guys doing?”

They anchored on the other side of the root ball, creating a stadium effect for Aquaman’s next trick.

“How big is your net?” Chris gurgled, having recovered his position a couple feet downstream of the root ball. The boys handed him a longer net. Chris poked around. Nothing. I gave a fresh pound to the reel seat and the fish teased us once again, just long enough for Chris to make an errant net swipe, lose his balance and go back under.

The rest of us sat dry in the boats in non-stop laughter until Chris dove down with fresh force, grabbed the root ball, kicked his legs like Michael Phelps, broke off the bird’s nest branch. And the monster trout moved freely and lazily downstream.

“There he goes!” I yelled, the untangled fly line now tight and accelerating off the reel, the rod now doubled over in my hands. Chris resurfaced.

We must’ve been twenty minutes into the spectacle by then. The trout was clearly exhausted, but that little four-weight couldn’t stop him. The fish had the good and likely life-saving sense to slip into the soft water near the bank as Chris paddled and waddled downstream and got below it.

Finally at full standoff, Chris stood over the beast and plunged the net.

“Got him,” he said. Not loudly. Not softly. Just assuredly. Like a man grabbing fate by the throat… 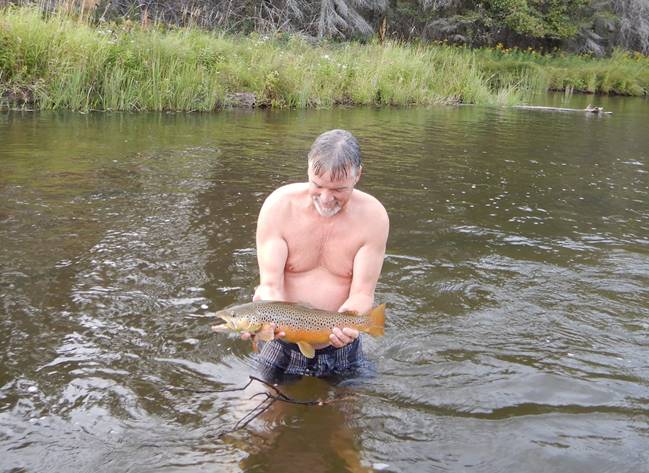 We three dry ones in the boats erupted in stadium roars, cameras running, as Chris raised his trophy, a branch still tangled in the line… 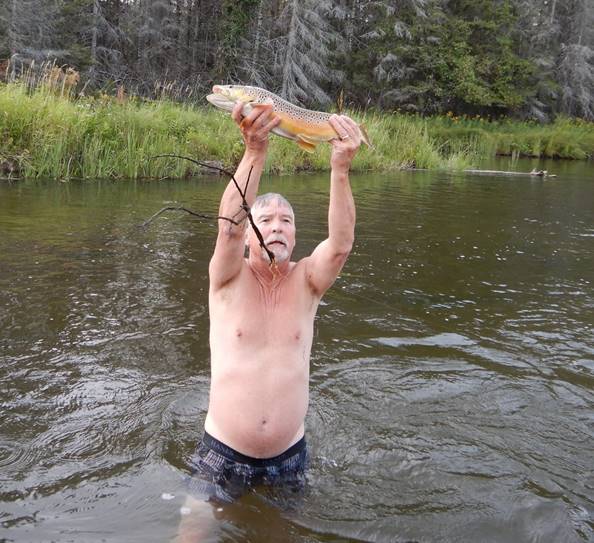 Fish and fisherman then showed their constitution. The trout recovered in the shallows and swam off, overcoming, it seemed, a fight that would’ve killed most. Chris climbed back into the boat, accepted high fives, took a big swig of Labatt’s, and tugged dry clothes over his wet frame.

“I’m sixty-five years old,” he said as he sat down to the oars.

We giggled and let that sentence hang in the air for the longest time.