Cold and rainy, a few spits of snow, a few cold thunderstorms accompanied by some punching hail: Oh, it’s October.  My family and I went camping up in Pigeon River Country.  It’s big, beautiful country.  Brought the trout rods, but did no fishing.  A little hiking, a little grouse hunting.  Some campfire, some shivering.  But all that is worth it for that morning camp coffee with water dotted by ash, boiled over fire, poured onto grounds, and pushed into the best drink of the day. 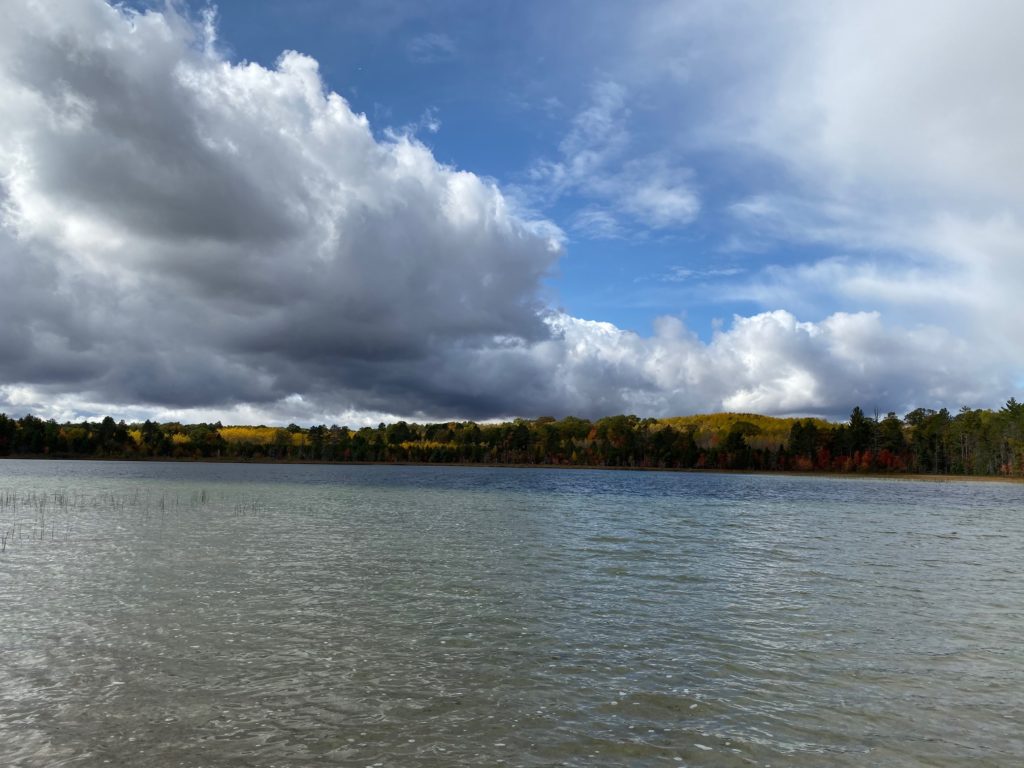 One of many beautiful lakes in Pigeon River Country

My friend Salem and I squeezed in some streamer fishing on Sunday – we had about three hours to fish before he flew out of there: A tag end to a weekend wedding of one of his friends near Boyne City.  And we cursed it by his hooking and losing a nice trout on his third cast.  The fish leapt, and the hook came free.  It was a dark, colored-up brown.  And if you’re going to lose such a fish, on the jump is the best way.  Still, after that, half-hearted chases.  Near the end of the day, Salem realized he left the keys to his rental car in my truck, which was back at the launch.   As he slapped his pockets looking for his keys a dandy brown trout raced twenty feet across the river and stopped at his streamer as it dangled in the water.  It was about as fast as I’ve ever seen a brown trout move.  And if it hadn’t stopped an inch from his streamer I would have told you it had been spooked, or was attacking our boat.

“Strip, strip!” I yelled.   Too late.  But thanks to a friend quick driving to make it back to my vehicle, he still made his flight.

Wednesday, yesterday morning, after a pretty good thunderstorm, fortunes were different.  As I walked down to the river the woods felt alive.  A doe and yearling spooked.  A little mist hung in the valley. 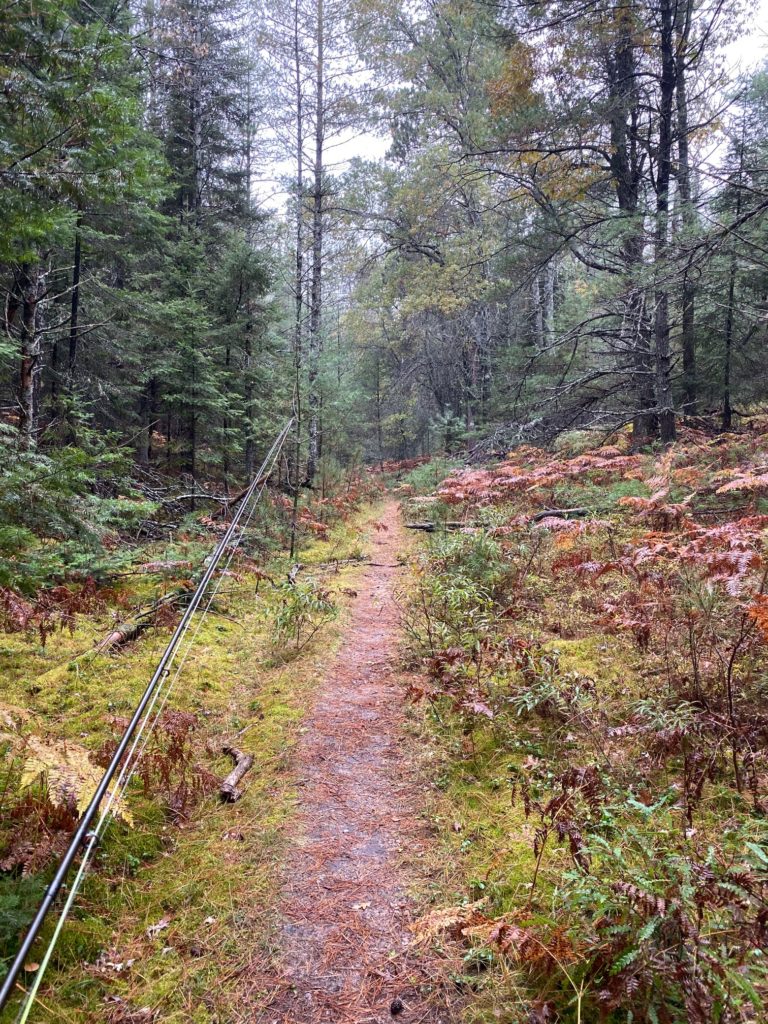 It didn’t start off fast, but once I switched to black, they were ready to eat.  They were pugnacious browns, medium sized, darkly-colored, and they came from the shallow cover.   I lost a big twisting trout that was in deeper water but it twisted and twisted and twisted away.  The takes were joltingly hard.  I saw only a few redds – the Manistee has more than the Au Sable.  The weeds are still thick, but dying.  If you wade through a patch they will snag your streamer. 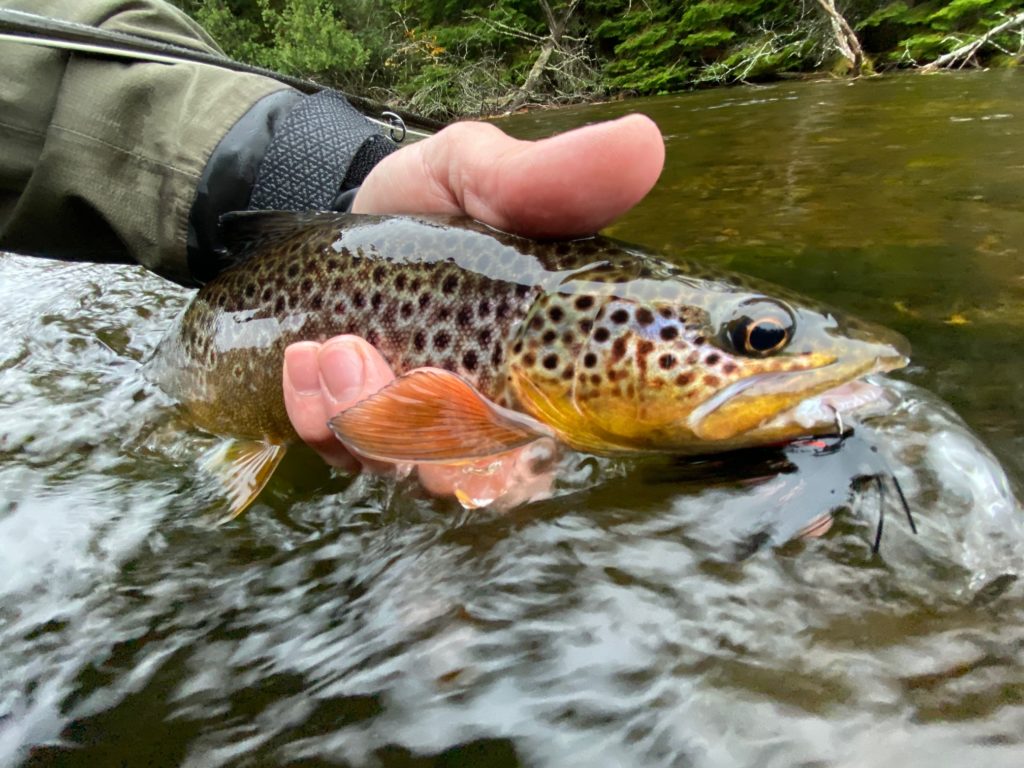 I saw no one.  And I don’t think anyone saw me.

It was good enough to skip the bridge and keep fishing, adding an extra ten minutes to my walk back.

The weather is going to change again, from cold and rainy and windy to sunny and warmer.  This will push the fishing into the afternoon and evening hours and make for some much needed pleasantness.  I truly enjoy the rank, dank days of fall, leaves in the wind and all that, but it’s good to spike such gloom with a few happy notes now and again. 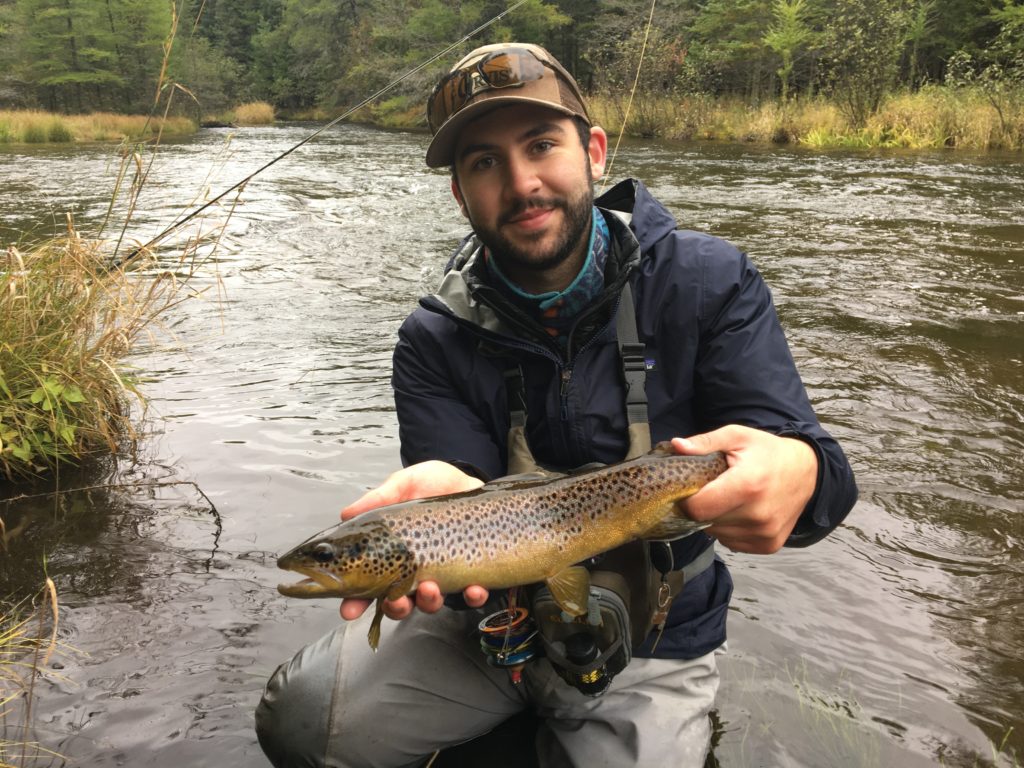 Aside from the streamer fishing, the afternoon olives will continue through the rest of October.  They are best on the cloudy days, and best fished in slow, flat, somewhat shallow water.  On the sunny days, the fish will be in the deeper, faster pools and runs, and nymph-rigs and fine tippet are best during the high sky afternoon hours, with some streamer fishing to be had in the morning and evening.  The days are shortening, the migrators are migrating, and the spawners will soon be spawning.  It’s a time of drastic change on the river.

Our restaurant will close for the season at 11 am on October 27th.  The fly shop will resume winter hours, 9 am – 2 pm, but will be open everyday.  We will keep rooms open throughout the winter if you’d like a quick, and quiet, getaway.