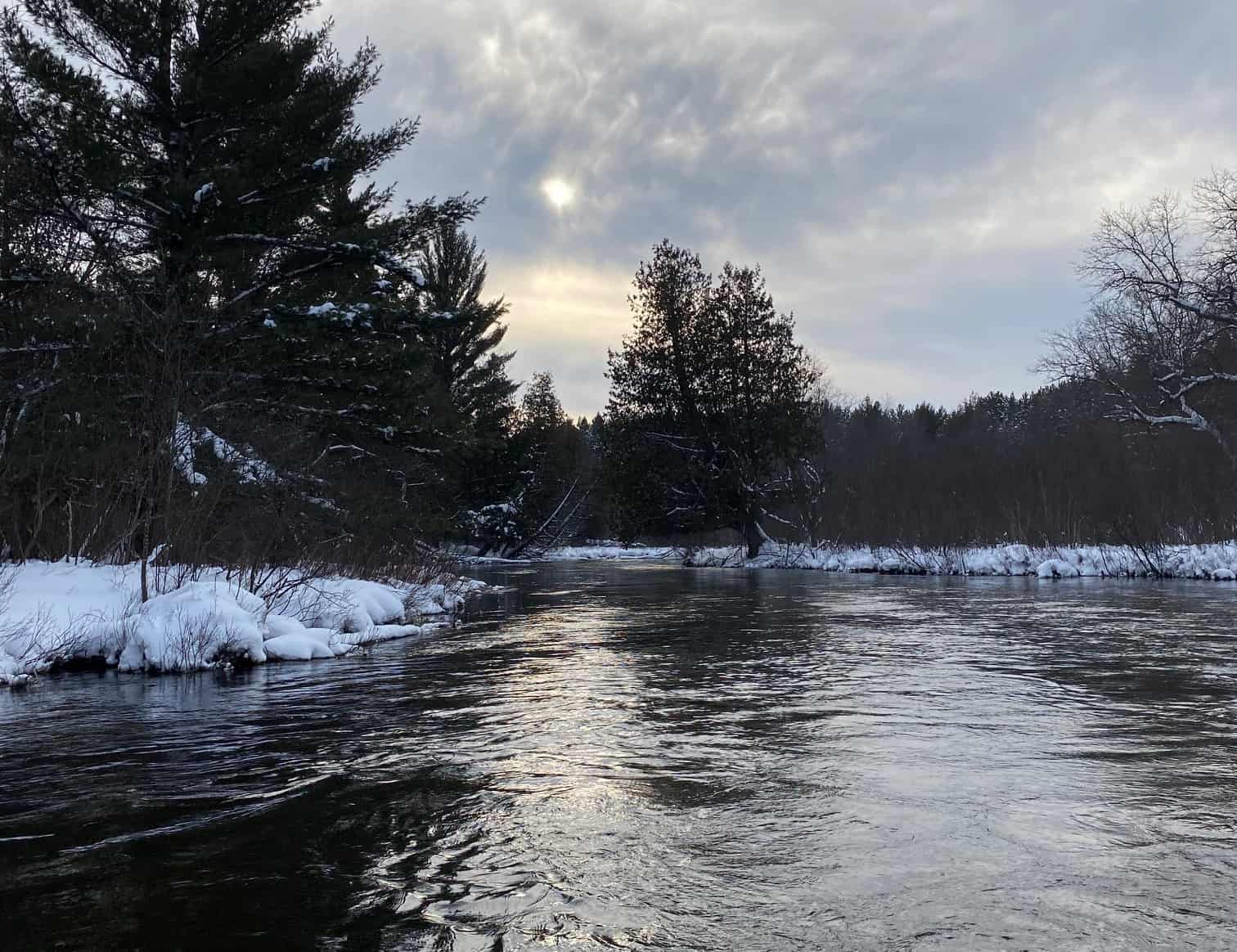 This forecast: A little better than our average early-April forecast.  At least the past few Aprils.  Goodness.  About ten days of highs above freezing.  That’s the forecast anyway.  I couldn’t wait and had to get out today.

There’s a stretch of river I wanted to hit because I’ve never waded it in the winter.  The game plan was to bring three rods and sneak upstream and sight fish to monster trout, tight-line the runs, and then streamer fish back down.  But as game plans go it was pretty flimsy.  Bringing three fly rods is only fun in a boat.  I settled on a longer 5-weight with a floating line and a pair of nymphs, and a reel with sinking line for the wade back down.

I told Denny before I left the shop that it was a risky plan, but as long as there wasn’t too much snow in the trees (produces white glare), and too much wind on the water, and too much sun, I should see some trout.  Well, the sun came out, the wind blew, and the spruce trees still had blankets of snow.  The river surface was white and riffled.  The first trout…was in fact a monster.  I saw it a half-second before it saw me.  It was a green-backed HUGE fish that was sitting at the top of a bend, in that soft water that is sometimes at the top of an outside bend.  It was sitting in front of a stump.

Two hours later, another spooked trout (also big), one hooked trout blind nymphed from a run, I sat down on this log for a break.  The snow made the log look wider than it was.  I sat down and tipped right backwards, soaking my neck and back in about five inches of water, which is no small task.  The snow tells the entire story.

I decided to keep going…but it just wasn’t the right water.  The current was too fast.  I thought this might be the case — trout do move in the winter, and good winter water is slow and deep, as you might expect…the emphasis being on slow — but I have this disease where I’ll just keep hunting for another trout.

At the top of a run, another forty slow minutes upriver, I found one.

I was crossing the river at a tail-out, so my eyes were trained not upriver, but perpendicular to the flow.  Not fifteen feet from me was a trout, a fine trout, a 20″ male trout, sitting with its nose against a stick.  This fish wasn’t glued to the bottom.  It moved and ate a nymph and returned to the stick.  I flicked out a cast, trying for minimal movement, and missed it short.  I thought.  But as I lifted to re-cast the fish rose up and opened its mouth just as my flies likely shot away from it.  No!  The trout froze, and then shot forward three feet.  I waited.  Slowly, it’s tail began wagging, and he slid back down to the stick.  I was, I realized, very cold.

I took another cast, and the trout waited until my nymphs went by, and then turned and followed them downstream…right out of my clear vision and into the white reflection of snow.  I figured he’d spooked at some point during the chase.  I set the hook, just in case, and the trout bolted upstream, back into vision, and kept right on swimming.  Two times, I whispered, Two times that trout tried as hard as it could to eat your fly, and two times you did everything you could to prevent it.

It was a fishless afternoon.

I’ll be back out tomorrow.

We’ve got a bit of a heat wave coming and so there’ll be a little fishing for those that like the winter game.  We’ve had a fair bit of snow, and as it melts, I suspect the boat ramps and access roads will get worse before they get better.  The South Branch roads can bury your vehicle and leave you stranded (trust me on this).  All that said, the trout are enjoying this very mild winter so far and seem healthy and fat, at least for mid to late-January.  All our rivers are clear and a tad high for this time of year.  The South Branch is stained and flowing at a rate approachable only for strong waders who know the river, the access, and the take-outs.  It’s not a bad time to hire a guide and throw some streamers.

Here’s the fly that the big trout tried to eat twice:

Free Fly Tying this Saturday, 9 am – 1 pm:  Meet up in the boardroom and work on your technique.  Denny will be teaching with video, and Kim and John will provide one-on-one instruction.  Tell us what you want to tie!  We have materials, extra tools, vises and lamps.  Show up with nothing, or everything.  No experience, or lots of experience.  A great way to become a more proficient tyer.

Tying Brown Bugs, with Josh Greenberg, Feb 1, 5 pm – 9 pm: I’ll lead a class on tying the bugs of May evenings.  We call them “brown bugs”, and they include the Hendricksons, Mahoganies, Light Hendricksons, Siphloplectons, Borcher’s Drakes (Leptophlebia), and March Browns.  Rather than imitate each individually, we’ve found a half-dozen patterns that sort of match them all.