Snowbound, but not down 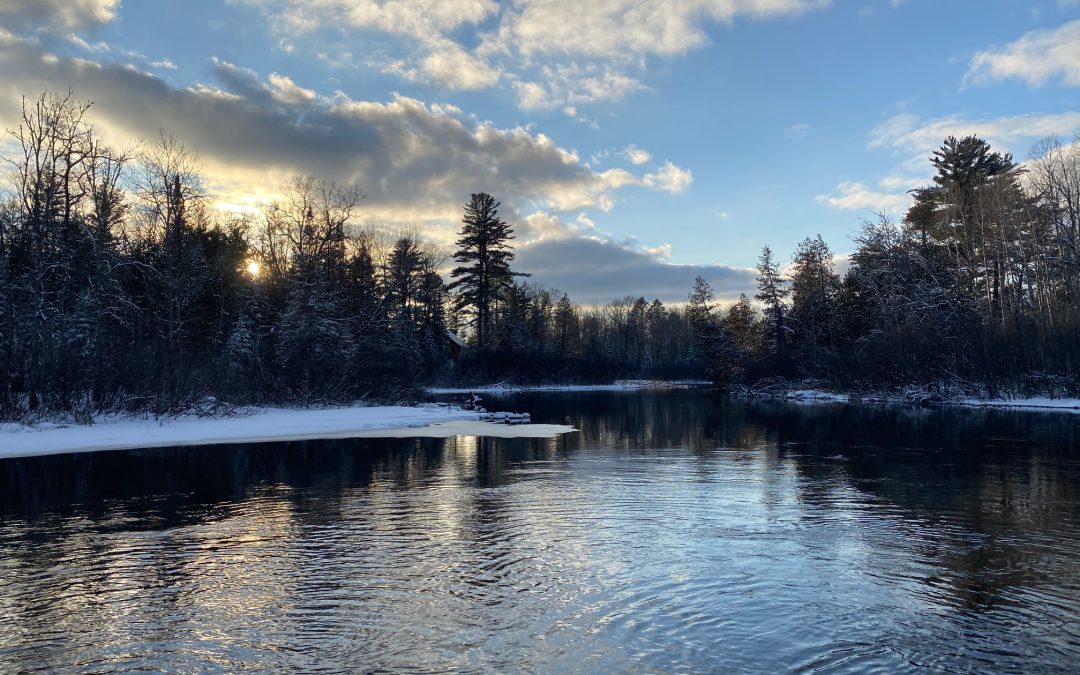 The other morning I had an idea for a new fly-fishing product.  An invention.  Its simple perfection was too bright to ignore.  I was headed fishing that day with Matt – we were doing our own car spot, and he was in front of me – and I had this invention idea burning through me and it was a snowy, empty road and I got to daydreaming about a certain component needed, and what would the specs be, and…  It happens quickly, even on deserted, snowy roads at 15 mph.  The snow just sucks you in. 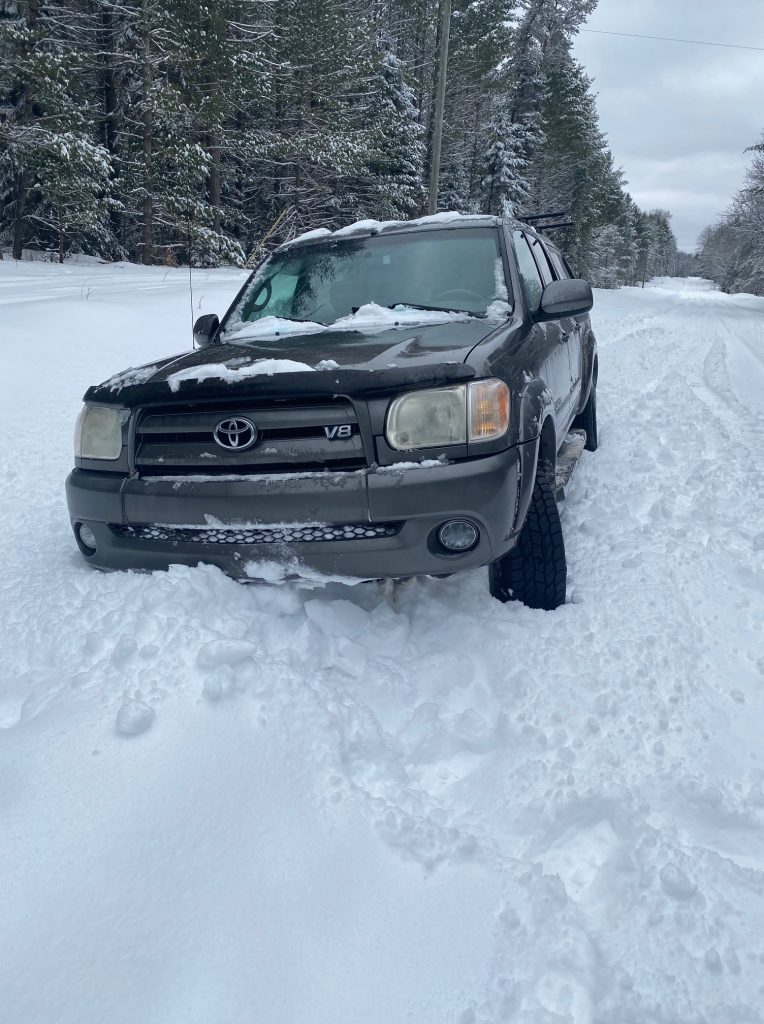 This truck is more stuck than it appears

Two hours later, several chains, a shovel, two separate vehicles, a DNR officer, and finally the truck busted loose of the snow.  We were sweating.  We were late.  And I was pretty certain that my idea wasn’t going to work out for a number of reasons, the most obvious being that the only thing I’ve ever really manufactured are flies and a few crooked bookcases.

It was the day after a half-foot of powder coated the forest.  It was beautiful. The river was clear.  The wind blew the powder from the trees and it fell in veils through the sun.  We tried yellow, then black, and back to yellow, subbed in olive and white, more yellow, and finally chartreuse.  It was a dead river except for one fluke brown that came from a backwater.   Fish like that keep the hopes on simmer even on slow days. 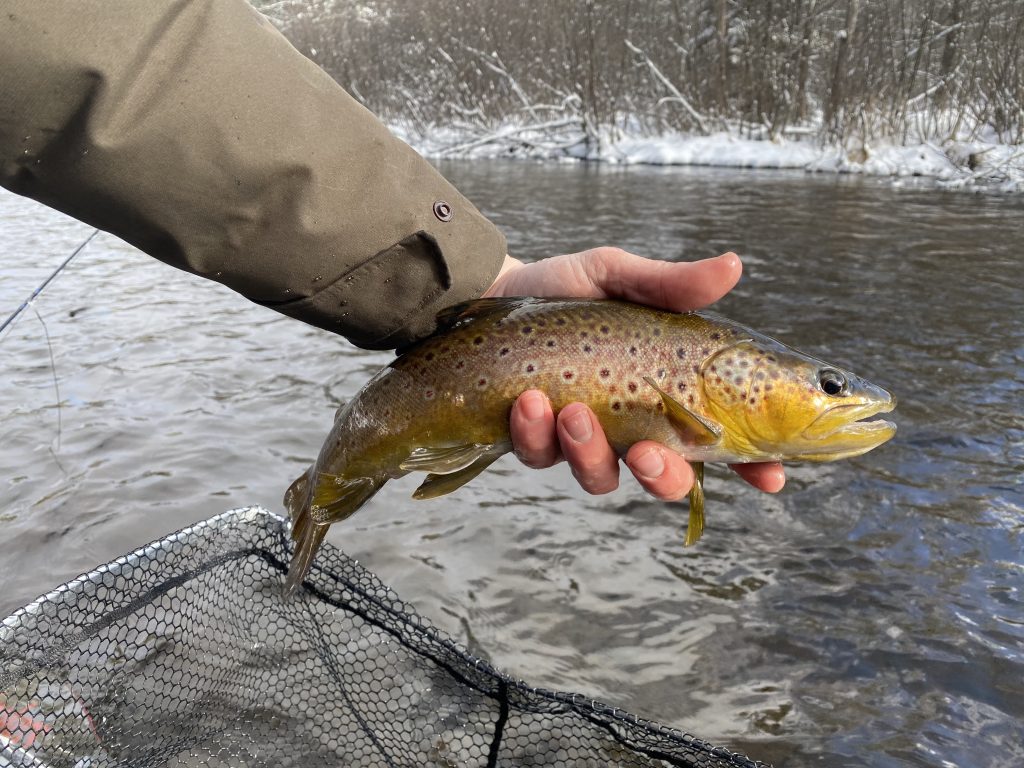 In the late afternoon I was stripping the fly across a submerged birch and talking about something, just running my mouth and not paying attention.  The river was quite narrow there and I only had a few strips to work the fly.  I lifted to cast and saw a big trout was closing the distance, rapidly, aimed right where the fly…had just been.  I’d pulled the fly from the water.  The trout carried right through where it would have eaten my fly.  I stared at the fish.  That trout looked confused.  I looked heartbroken.  The fish swam under the boat as I sailed a cast back upstream to where we’d been.  Nothing.  No.

We switched so I could row out my frustrations.  Then it happened to Matt.

We were squeezing under a leaning tree and he flicked a cast to the left into a little dead spot where he’d had a client hook and break off a fish during hex.  As soon as his fly hit the water, the river boiled, a wake appeared, and another boiled engulfed his fly.  Matt stripped and set…the rod right into the tree.  He pulled on the line to try to keep tension.  The fish was there.  The rod bucked.  And the fish was gone.  That was a great, big fish.

Soon after, Matt found a trout to cap the float:  A hard fighting fish with not a leech on it (as they often do in the winter) and maybe, just maybe, the feel of spring in its flank. 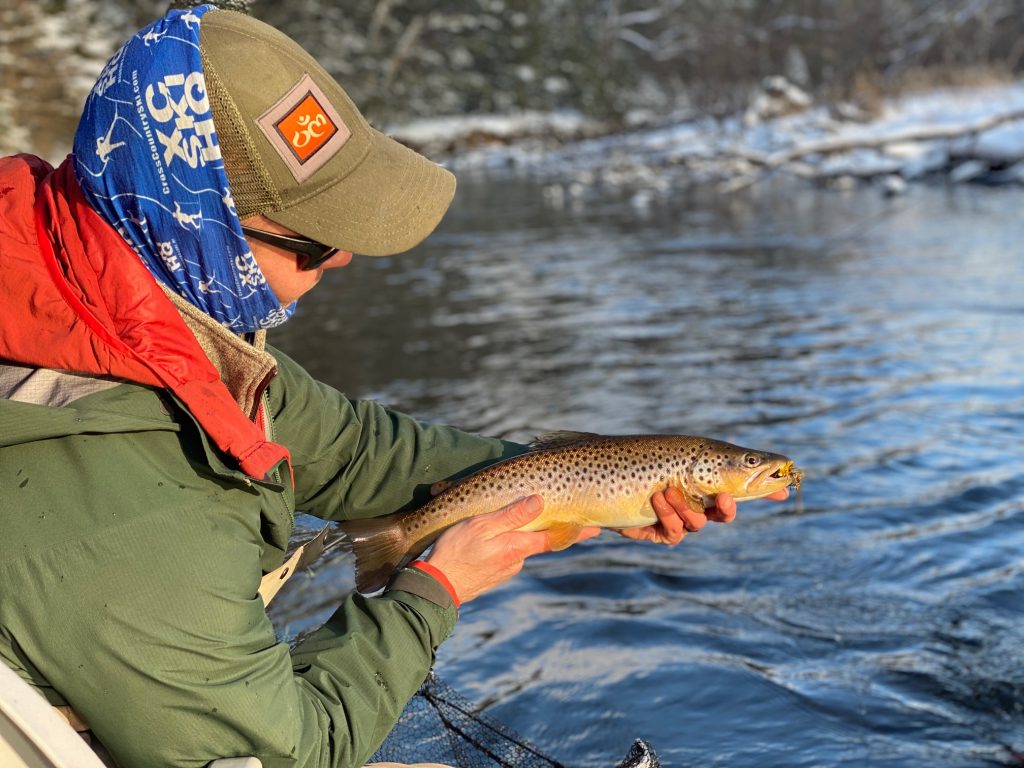 It’s February on the Au Sable.  Aside from a smattering of cold days, the weather has been mild and the sun is setting later everyday.  We seem to be on the front of edge of a prolonged warming trend that carries right into next weekend.   The weather folks must be panicking not having any bomb-cyclones to name (gonna start calling them bum psych-clones).  I’m okay with it.  And even when the sun keeps the fish shy, it sure feels good.  Pels said he’s been finding some fresh steelhead on the Manistee (he guides there in our trout offseason) so I may go check that out with him one day here soon – I’m happy to link folks up with him for some big-water steelheading.  Looks like fun.  And now is the time.

I’ve been nymph fishing here and there and finding some fish.  This time of year, and even more so as the weather warms, the trout will switch to size 12-16 mayfly nymphs in any of the countless iterations now out there (hard to beat bead head pheasant tails).   We get a nice run of spring rainbows in the Holy Water and they can spice up a nymph day.  Kevin found a dandy this week.  As we get into March, you can expect there are a few big rainbows in most of the deep holes.  You’ll know if you hook one. 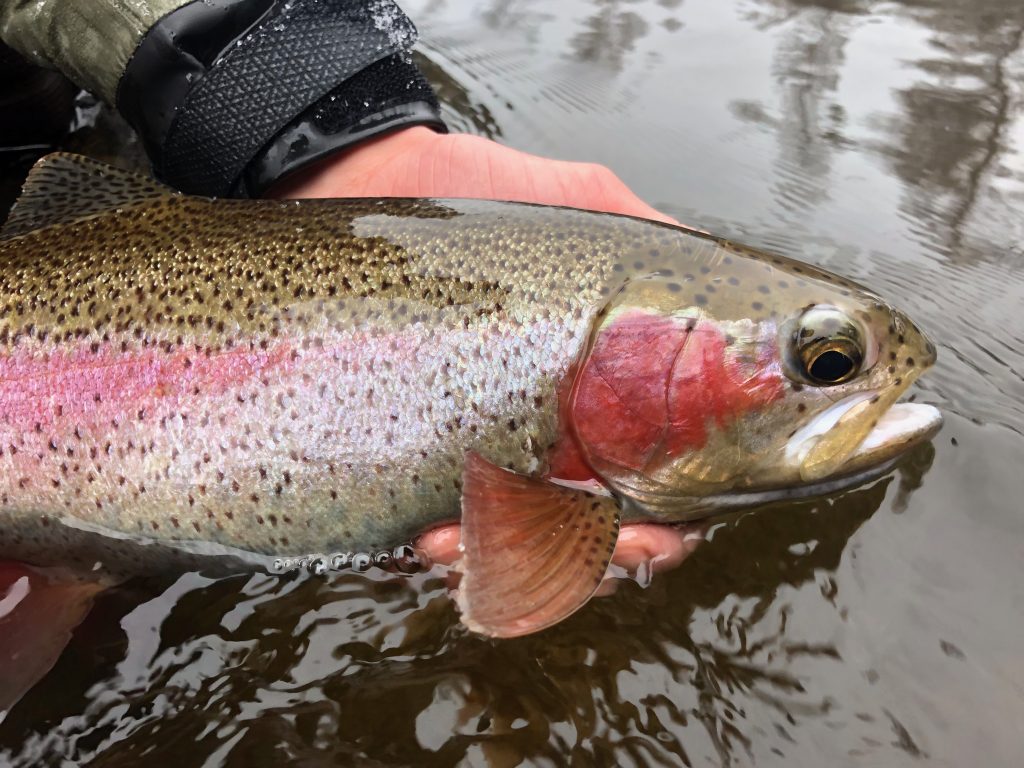 I do enjoy winter fishing.  I like to be alone on the winter river.  The river is where the life is.  Trout.  Otter tracks.  Beavers still sliding through the snow.  Deer.  Turkeys.  All that.  But I’d trade all that for a consistently rising trout right about now.  Won’t be long, right?  Right.

Our next evening Saturday session has to do with the hex…and it’s going to be a good one!  February 29th, 5 pm – 9 pm.  Here’s the info: https://gateslodge.com/event/hexed-tying-hex-flies-with-gates-lodge/