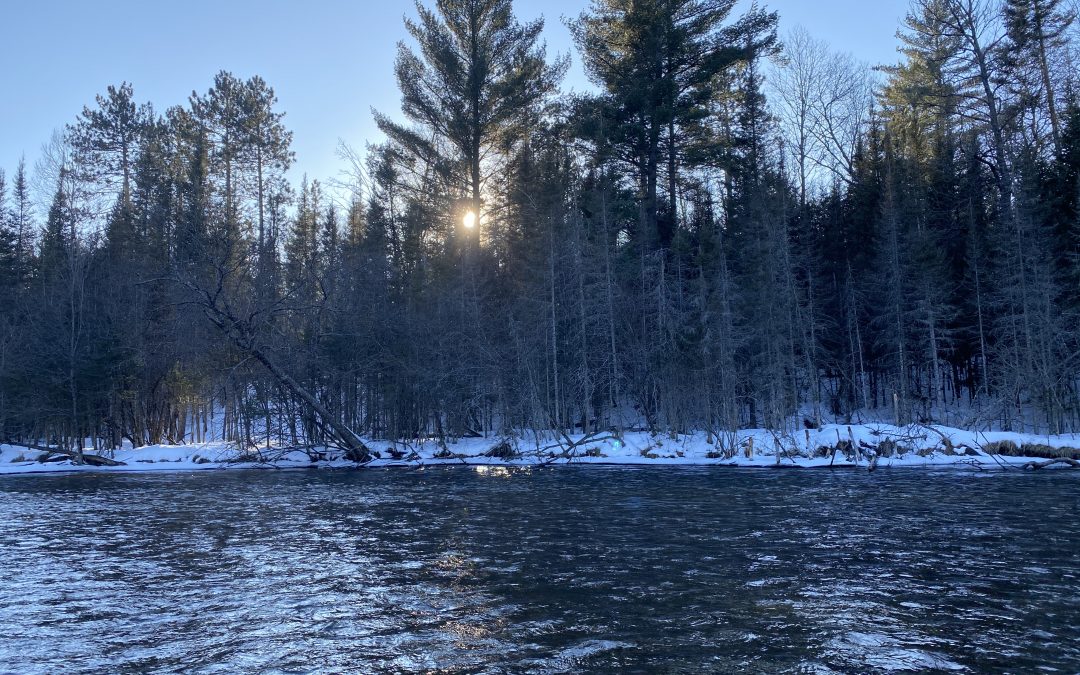 Nothing like three or four days of forty degrees to whet the appetite for spring.  And I saw a fish rise.  I did.  It was in unlikely water, with just a few midges, and I don’t think it was rising to a midge.  For all I know it was a spooked sucker or something.  But it sure looked like a trout rise to me.

A lot of folks made it out fishing.  It was tough in the high sun but I didn’t hear anyone complaining.  I got out on Sunday afternoon, late, with Lance, who helped with free fly-tying.  The river was clear.  Too clear, we said.  Then we hit a small feeder that was rushing with dirty snowmelt.  Too dirty, we said.  We fished from the boat with a variety of streamers, retrieves, and so on.  Then we dumped anchor and tried nymphing some runs.  Nada.  The more we didn’t catch a fish, the more serious we took it.  Tried to think through every run.  Stopped when we thought we needed to.  Lance had one pool that he wanted to fish.  I decided to try swinging a streamer through the tailout while he nymphed the inside of the deep water middle.  After hardly seeing a fish for the first hour, I didn’t have much faith in the streamer.  I fished a tungsten fly swung deep with a few strips during the retrieve.  Wham!  Solid hookup and…gone.  Four steps downstream, and the skunk was broken. 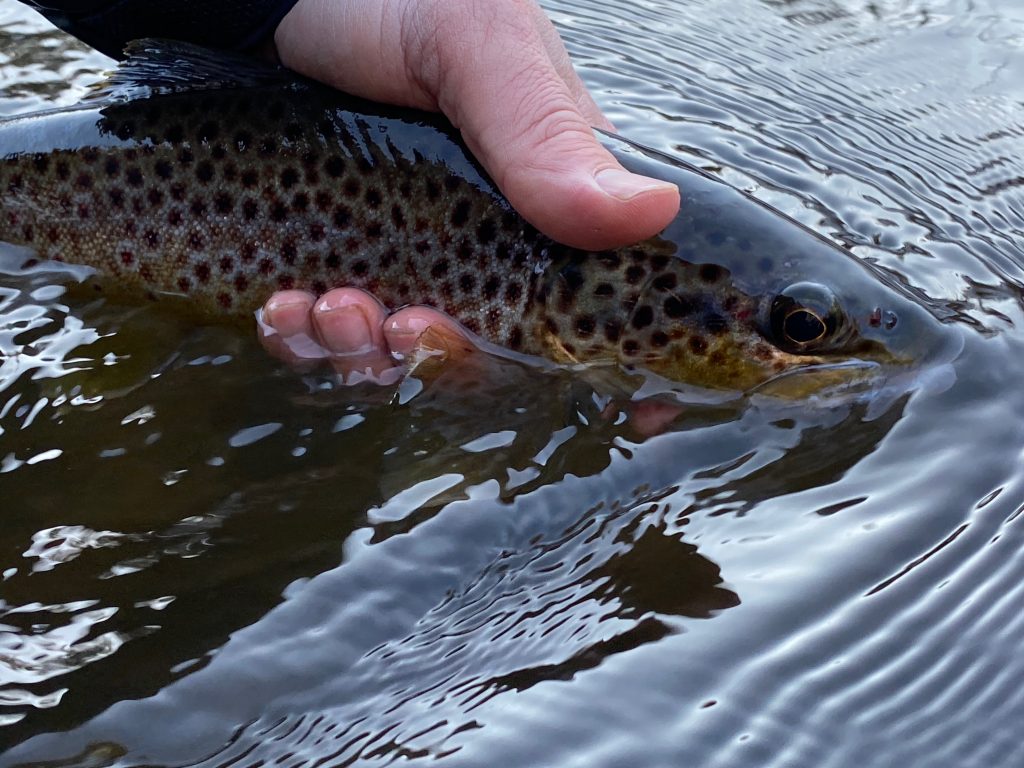 A minute later, I heard Lance give a whoop.  And, just like that, it was a good time to call it a day. 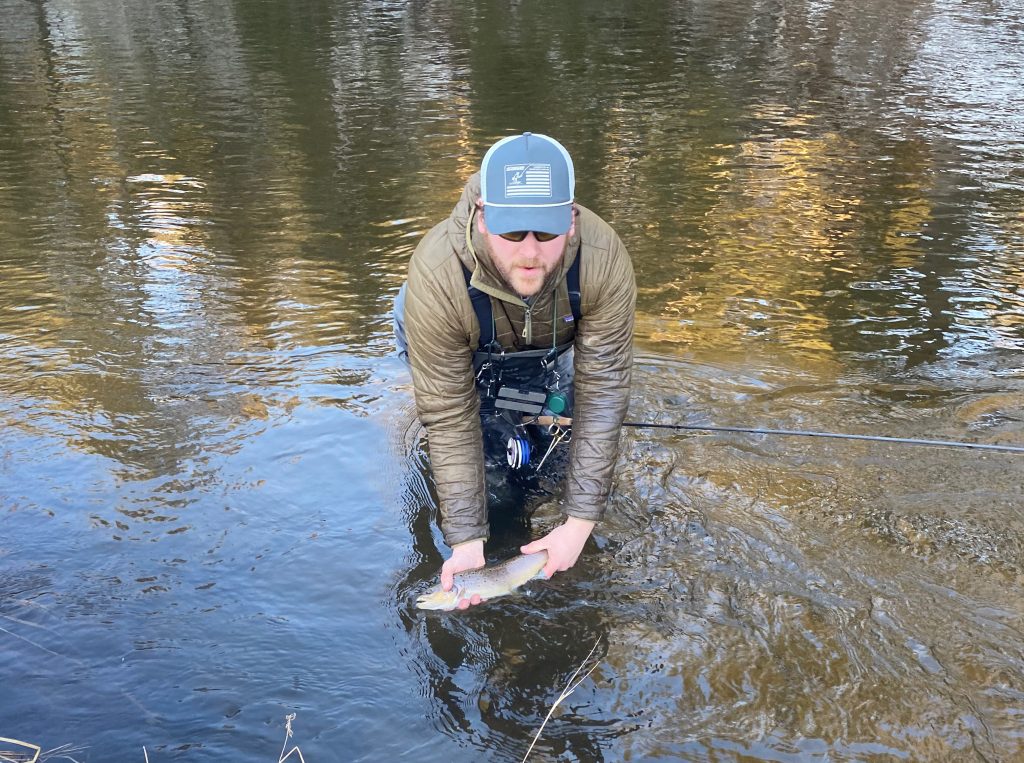 Early spring can be fickle on the Au Sable and Manistee, and it’s not really early spring yet.  But there are some signs.  The snow we have is old and icy (but there is still enough of it to prevent access to quite a bit of the river), the warm stretches are above freezing, and starting to outnumber the cold snaps by days and days.  And the spring run of rainbows has started to move upstream.  They will continue to build in numbers throughout March. 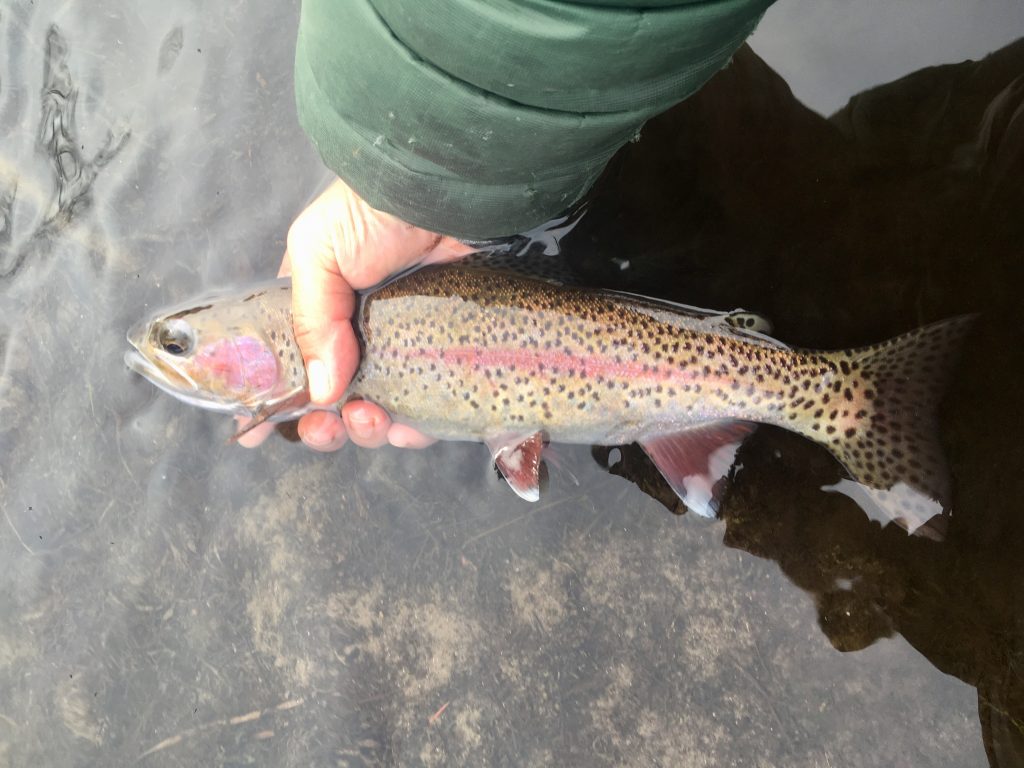 I heard a number of different reports and techniques.  As the water warms I begin to focus on imitating mayfly and caddis with my nymphs.  The many hendrickson nymphs that are in the river are a stout size 16…so I usually upsize to a 14 (think bead head pheasant tail) and fish a heavier fly beneath it (jig style, tungsten-beaded fly) and only add a split shot if the current is preventing my flies from presenting properly or I think I need more depth.  As noted above, don’t be afraid to fish streamers slowly through the middle of the river, on a slow swing.  The boat can be great, but if the fish are in the middle of the river, and you’re fishing a narrow river, it’s worth getting out and swinging the pinch points which not only congregate fish, but also are difficult to fish from a boat. 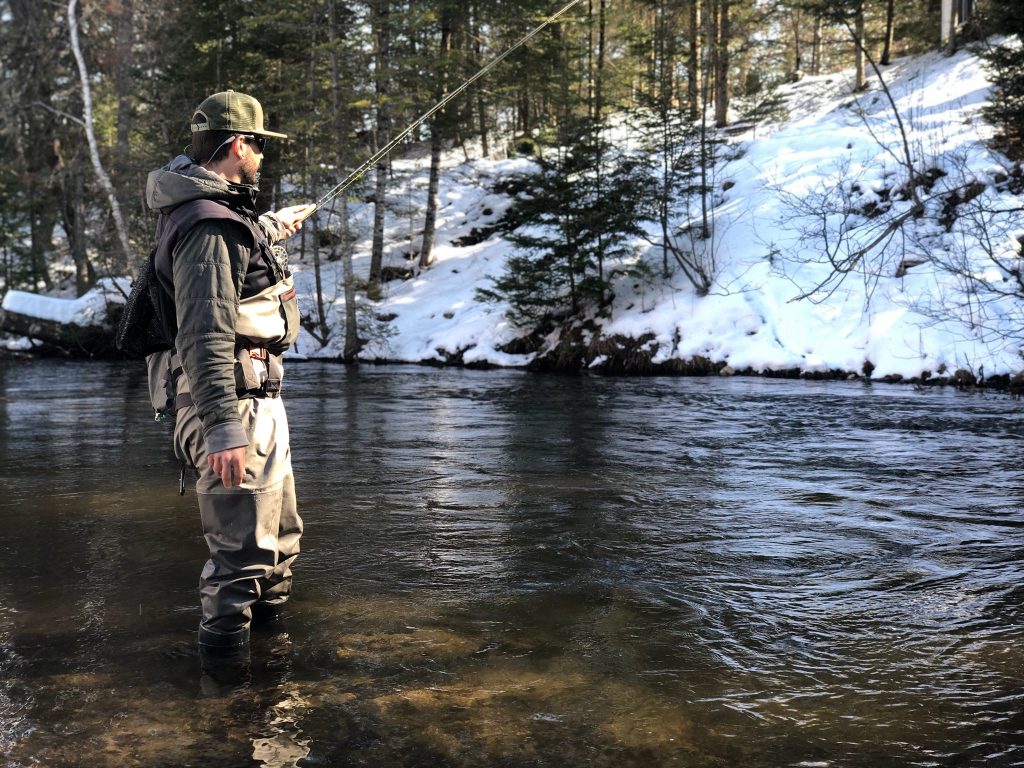 Denny working a nice inside edge

I’m starting to think about spring.  The sunshine has me thinking.  The first few stoneflies.  The midges.  A video my friend Randy sent me of him catching trout on BWOs just south of us.  Yep, it won’t be long.  So I had to tie a fly for it:

We’re open for dinner and breakfast this weekend.  Click here for dinner menu and hours of operation.

We’ll be back to tying in the boardroom this Saturday for Free Fly Tying.  Stop in and crank some bugs.  We’ve had a great turnout all year, from beginners to advanced tyers.  Some folks have come so far in their fly tying and it’s been fun to watch.  We still have spots for dinner on Friday and Saturday this weekend.

This Saturday’s evening Hex session is full, but the March 7 Terrestrial Class still has some spots.  I love tying terrestrials, especially for the Au Sable.  Crickets.  Flying ants.  Deer flies.  That’s what we imitate, and so that’s what we’ll tie, and this class will include a fine dinner.  The restaurant will be closed on the March 7 weekend, but we will be offering a free continental-style breakfast (Saturday and Sunday morning) for folks booking rooms for the weekend, as well as a Free Fly Tying class on Saturday morning.  Make it the last winter getaway before it’s time for spring fishing.