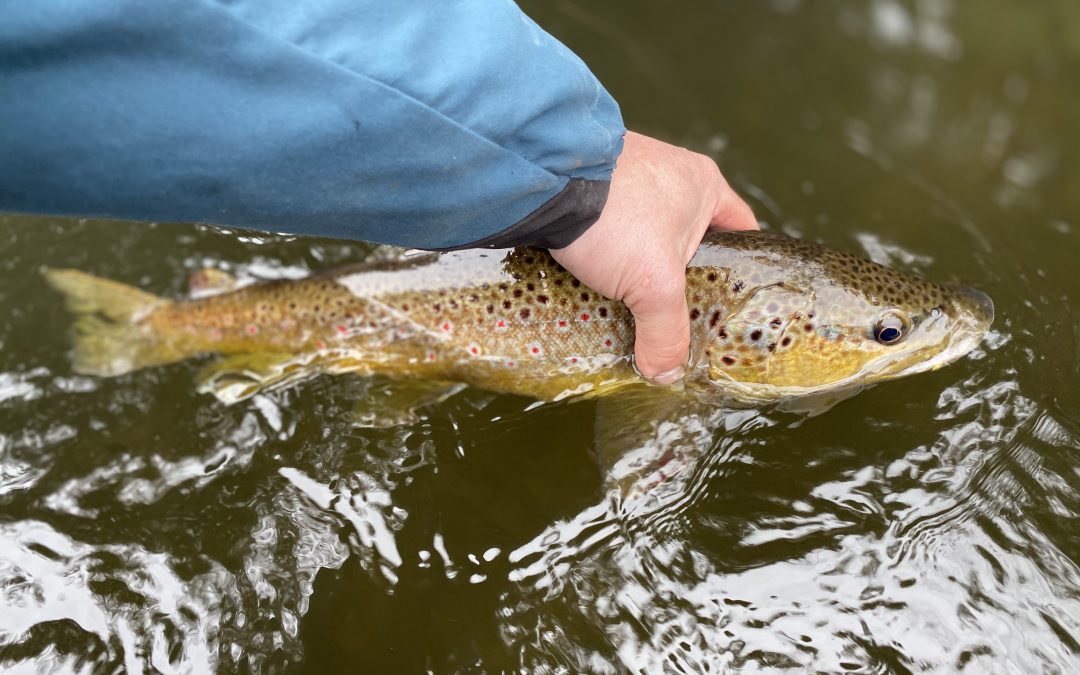 For better, for worse, the trout season is underway.  In many ways, this is the spring we’ve all been waiting for.  Today’s rain provided a dose of reality.  I mean, how long can we have crystal clear rivers in late April? 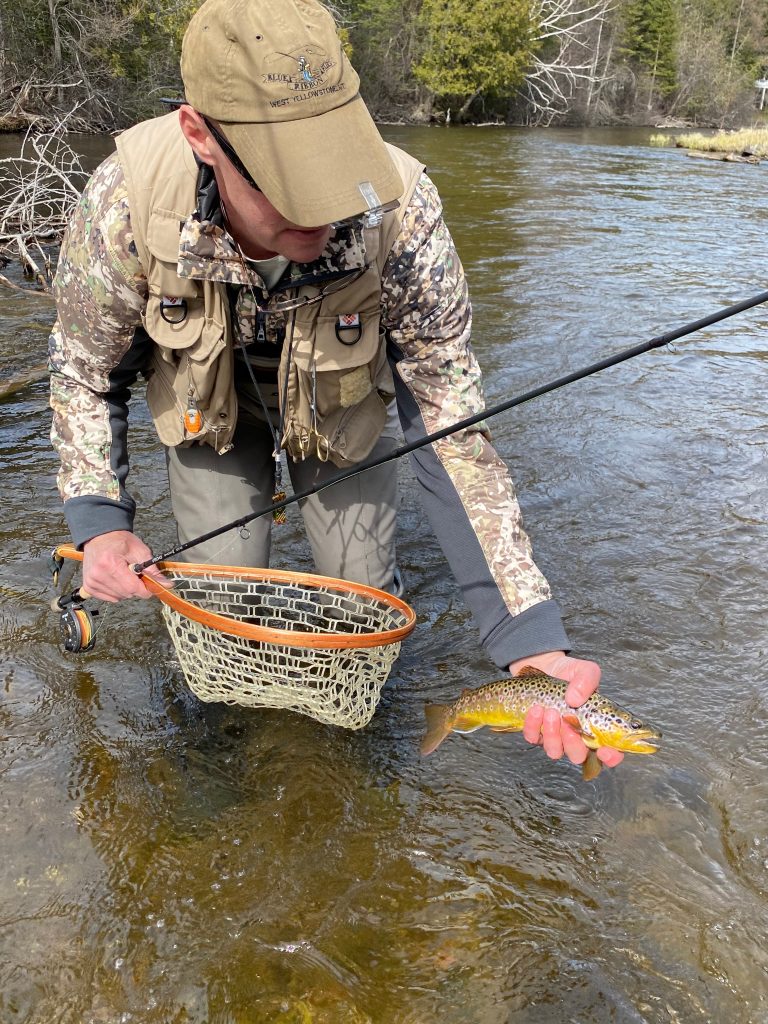 It rained at a slow but constant pace for much of the day today and there was very little in the way of hatches, at least that I heard of.  But there have been some good hendrickson hatches over the past week.  This weekend, the warmer forecast should provide the first evening spinner falls of the year, and maybe the first caddis hatches, which tend to emerge at lunchtime and really diversify the dry fly fishing when they mix with the afternoon BWOs and hendricksons.  Hopefully the river levels will remain wadeable in spots.   We’ll be watching water levels and trying to figure out if tomorrow is a streamer day, a dry fly day, or both.  Often this time of year, a streamer day transforms into a dry fly day: a happy metamorphosis. 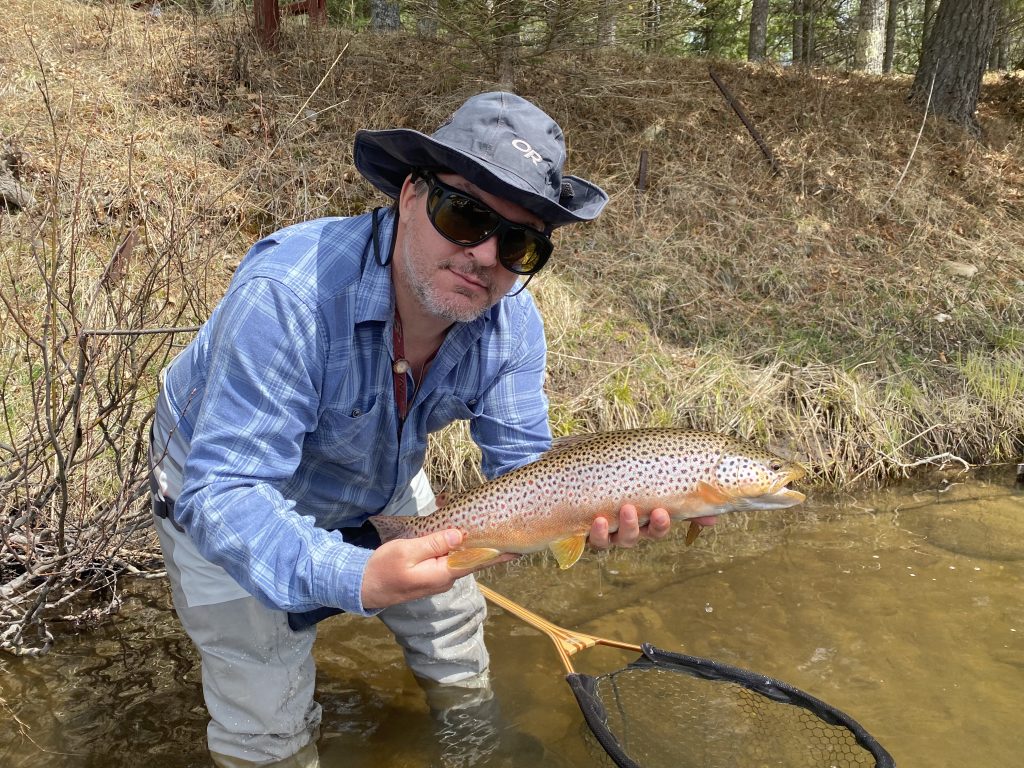 Junks with a perfect trout

I made it out on a rainy Sunday afternoon for a small solo adventure.  This was a dry fly day.  I didn’t bring a streamer.  My plan was to float down the river looking for rising trout.  Such floats, at the very least, are peaceful.  I’ve seen a lot of that this year.  People floating solo, or wading new stretches of river…forced by the current restrictions to try something new.

The first trout I found was a big one, one of the most sensational rising trout I’ve ever seen, anywhere.  It was sucked up between two tag alders, in a little mucky cove, and eating every single hendrickson that got blown across the river and right into his little hendrickson trap.  There he would casually rise, leading with his open jaws, which came straight up from the water, snapped shut with a click, and then led his whole body in a parabola, tail chasing his dorsal.  I really meant to film the rise. I really did.  But there I was anchored at a safe — too safe, as it turned out — distance and I had the sort of buck fever that would have resulted in shaky video as best.

I’d been on the river for five minutes.

The situation seemed somewhat familiar: I had anchored across the river from the trout, had left myself no backcast, the water was very clear, and I was in a canoe that, were it to attempt to adjust my position, would almost certainly send a wake into the fish, spooking it…which, to me, would ruin the entire fishing afternoon.

What this meant to me was an epically long roll cast across the river to the fish.  It took a lot of casts to get one even a foot short, and the one that was a foot short I had to let float down because a fish like that, a fish that has so little to fear, might swim over and eat it.  Then I hit that same one-foot short cast like six times in a row and I had to let each of them float down and sweep away.  Meanwhile, the trout was slow-rolling every dun that went over him.  Every one.  If three get blown there at once, he’d eat all three.  This trout was rising in the rhythm of: eat every single hendrickson that enters this cove.  When I finally got a fly into the zone, I realized the trout was in dead water, and so I fed so much slack into the drift that when he ate the fly, and despite being across from me, my hook set was straight upstream, and the line came tight in an enormous half-circle that sizzled in the water under the new tension.

It was a big male trout, and I landed it at 3 pm on the dot and I was so smitten I would have gladly floated the rest of the way without casting.  But two other trout, of only slightly smaller stature and caught at almost exactly 4 pm and 5 pm respectively, rounded out an afternoon that was so unexpectedly good I’ve been sort of reliving it since. 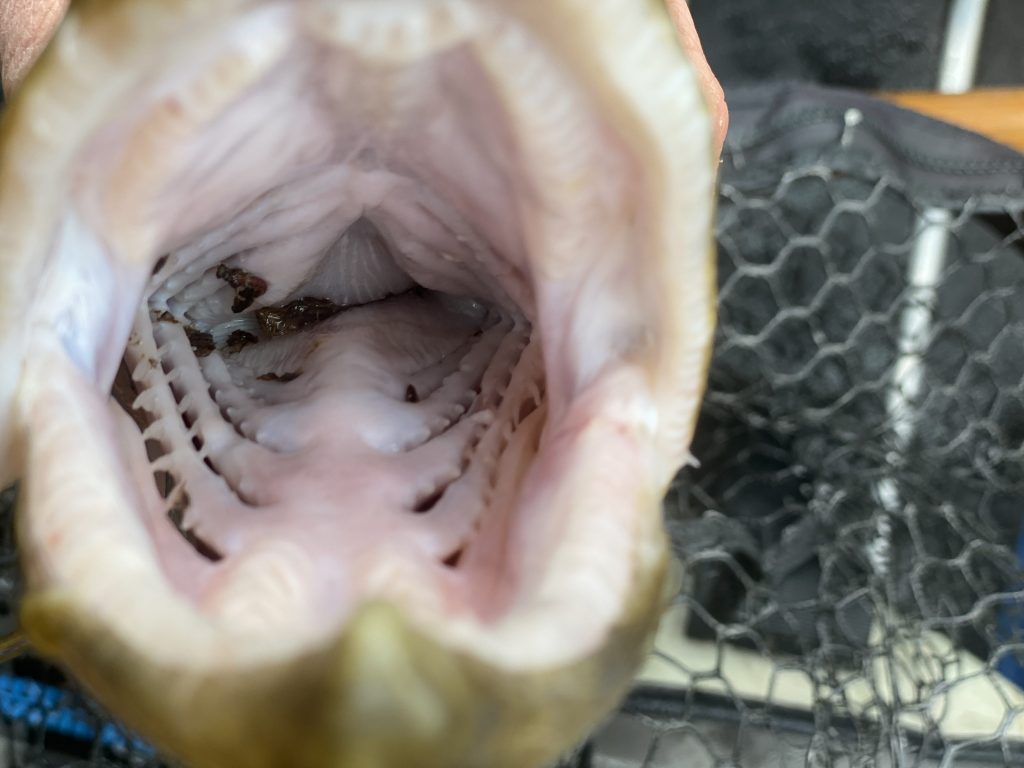 Hendricksons must be tasty…

Opening Day was great fun even if we had to do talk thru the window or over the phone or over email.  But I sure did miss having coffee with the regular Opening Day crew.  For some, fishing is a solitary activity always.  For others, fishing is primarily a social event.  The rest of us tend to fall somewhere in-between, roaming about with a cohort of friends or family that constitute a fishing camp.  Such camps tend to have their own traditions and jokes and card games that have been running for several generations.  One camp in particular speaks reverently about a fly called the Fundis Break, a fly they claim has been used successfully all over the world and has to its credit catches of substantial Atlantic Salmon, carp, bonefish, tarpon, permit, bluegill, chubs, sticklebacks, bullheads, Mahi mahi, blue marlin, and crappies, just to name a few.  Well, they insist I share with the world, as an entry in the Shutdown Fly Contest. 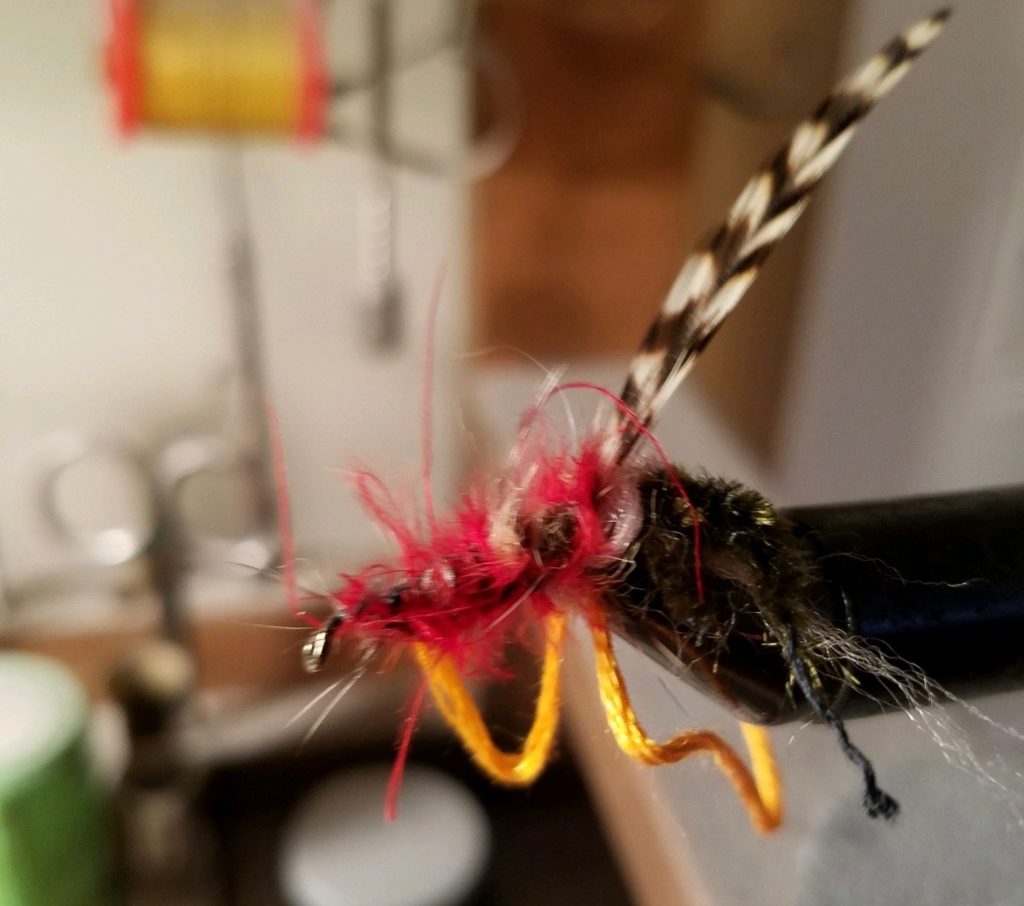 And it’s this sort of stuff that I miss.  For some folks, 2020 will be the first Opening Day they’ve missed in twenty, thirty, forty years.  My friend Spence was shooting me old throwback photos from previous Opening Days.  Man, I’d tell you it brought back memories…but I was a kid when those pics were taken!

We will be watching the water levels closely.  Already the gages are skyrocketing but we’ll know a lot more by tomorrow afternoon.  I don’t think it’ll be a blow-out.  Just a high river after a solid rain.

Check out North Branch levels here (this is a new gage, the result of a coordinated effort among conservation groups): https://waterdata.usgs.gov/monitoring-location/04135800/#parameterCode=00060

Sign up for our Email Blast on the homepage: https://gateslodge.com/ and I’ll be linking with flies for the upcoming week from our online store (www.gatesflyshop.com).  We’ll be posting a sale every week this season.  We are updating our online store daily.  More flies.  More comprehensive selection of terminal tackle.  And the whole slew of rods, reels, lines, waders and boots.  Free shipping on all orders.  Or, choose pickup, and we’ll have it ready for you at the fly shop.

We will once again be offering take-out food this weekend, including take-out breakfast sandwiches and even a few hot dinners.  Stay tuned to our two facebook pages for more details: