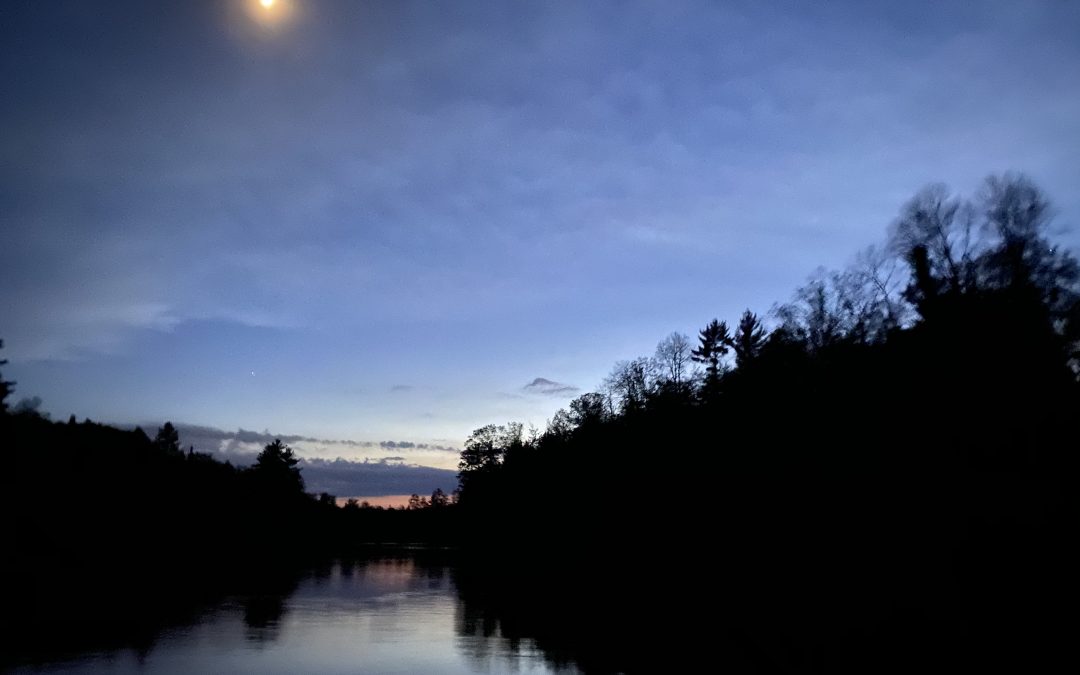 Friday Update:  The North Branch is very high and dirty.  The main has a stain.  The South so far continues to fall (?)

With spring comes high water, heat waves, cold snaps…all in a matter of days.  And with such weather comes the sulphurs, the yellow stones, the caddis, the mahoganies, the big mahoganies (what we call the brown bugs), and soon enough the brown drakes and the bugs of June.  Mix in mosquitoes, morels, leaves on the trees, a little forest fire scare, and rising trout…It’s pretty springy up here. 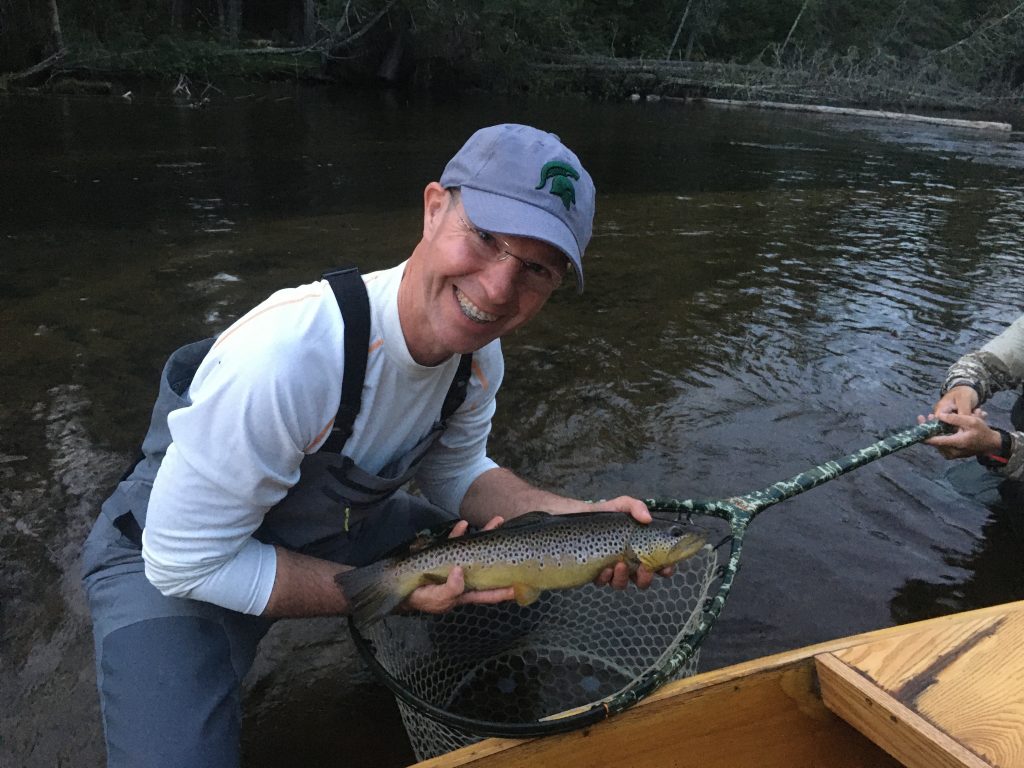 Just pinged my phone…a nice brown from this evening’s rise.  Travis holds for the pic while Jordan keeps the net at the ready

I’m probably a day too early in writing this report as Thursday (tomorrow) carries the potential for significant rainfall and that can, once again, change the fishing forecast.  As of this writing, however, the Holy Waters is stained, a tad high, but the trout are rising.  The North Branch is in fine shape: clear and perfect water levels.  The Manistee is a great river this time of year, especially in the evening.  The South Branch, however, is a different story: It’s over 400 cfs and falling about 25 cfs per day.  Theoretically, it could be in okay shape by the weekend if we somehow don’t get a bunch of rain tomorrow.  As of now, it’s high and dark and not fishing all that well.  The lower river, carrying some of the South Branch’s burden, is fishing okay but not as good as normal.

It’s the upper stretches of the rest of the Au Sable and Manistee that have been producing some nice fish.  The trout have been happy in the bubble lines and blind fishing a purple patriot, Roberts Yellow Drake, or a yellow stone has been pretty fun during the daylight hours. 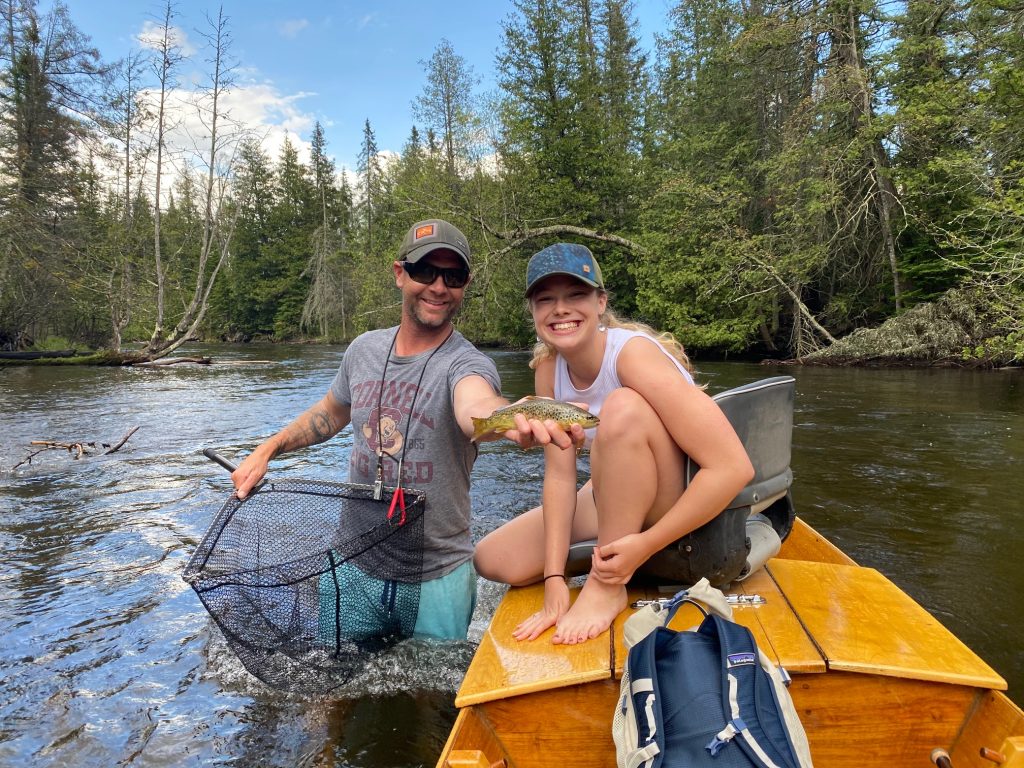 Lots of punky brown trout in the river right now

The evening fishing for me has been hit or miss.  Over the weekend I lucked into a really nice trout eating sulphur duns along a weed edge.  When I set the hook, it leapt out of the water, proving to be larger than I figured, by the rise.  A night maker. 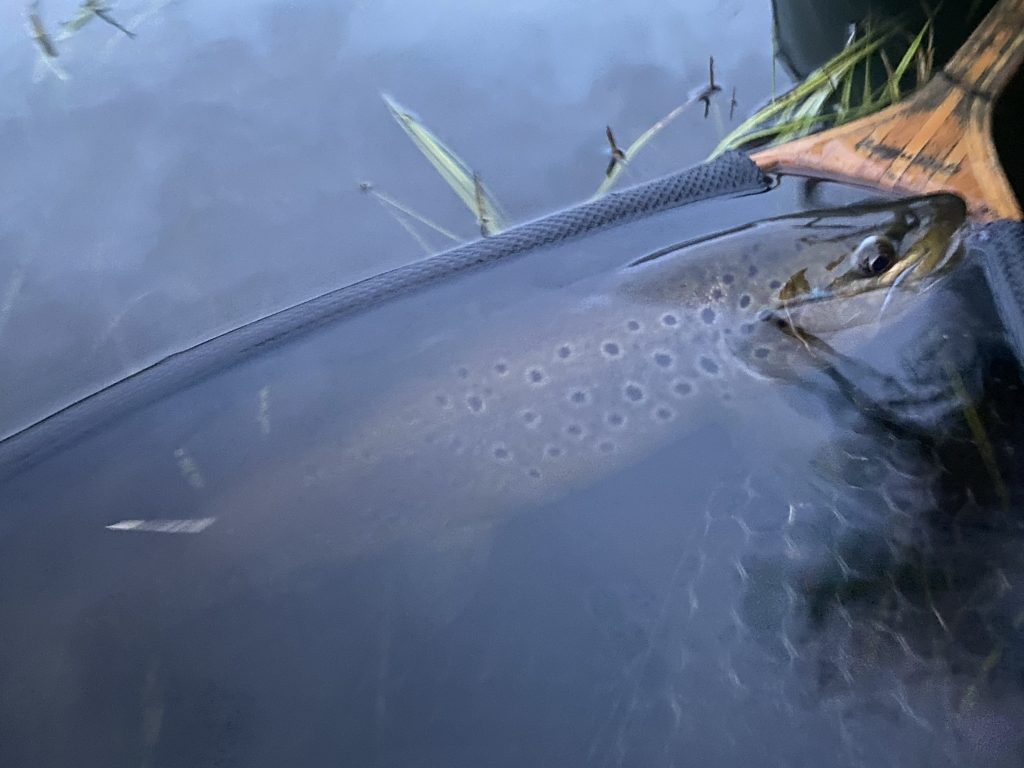 A few nights later with Lance the fishing was slower as the heat moved in and pushed the bugs right into darkness.  We worked a trout we thought was much larger than it was and Lance hooked it.  The trout wiggled off and left the hook in Lance’s finger:

Further down, in silvery darkness, we found two trout rising in a crevice in a log jam.  I pushed the boat up into the jam and cast across a real tangle of wood for the top fish, which was a large trout — no mistaking that one — that was feeding under a bent stick.  It was a real bad situation but I figured I might get lucky and I did…at first.  The cast was too long and the water was slow and it took a long time for my fly, which I couldn’t see, to drift down to the fish.  But the rise sounded about where I thought my fly was, and I set the hook successfully…but my reel fell off my rod.

“My reel is in the bottom of the boat,” I said.  I was stripping line in like crazy and trying to lead the fish through the jam.  It wasn’t going well.

The trout turned back into the jam and then the tippet parted.  I figured he’d hit a stick or gone under a log but when I got the tippet back it was a smooth break, probably from a trout tooth.  I’ve had reels fall off the rod, but never on the hook set.  It was bizarre.  But it was a demo reel and I’m sure I simply turned the tightener thingie a few times and chucked it back in my vehicle at the end of the workday without checking it.  Oh well.  Sad to leave a fly in a fish mouth though.

We’ll use social media to update anglers on the water levels.  This has been a May of fluctuations: from snow to 90 degrees, from a low water start to a high water finish.  This weekend will be refreshingly cool and that should push the rise back toward the late afternoon and early evenings.  Keep your fingers crossed against the rain, and enjoy the river.

Shutdown Fly Winners:  There were so many great entries.  Our judges have picked three winners and I’ve thrown in a couple of funny ones too.  Below, in no particular order, are the winners who get their pick of Scientific Anglers fly lines:

Mark Fryt — Elk Hair Klinkhammer.  Judge’s Remarks:  This fly appears to be constructed entirely out of hair.  I find this to be very innovative and practical. 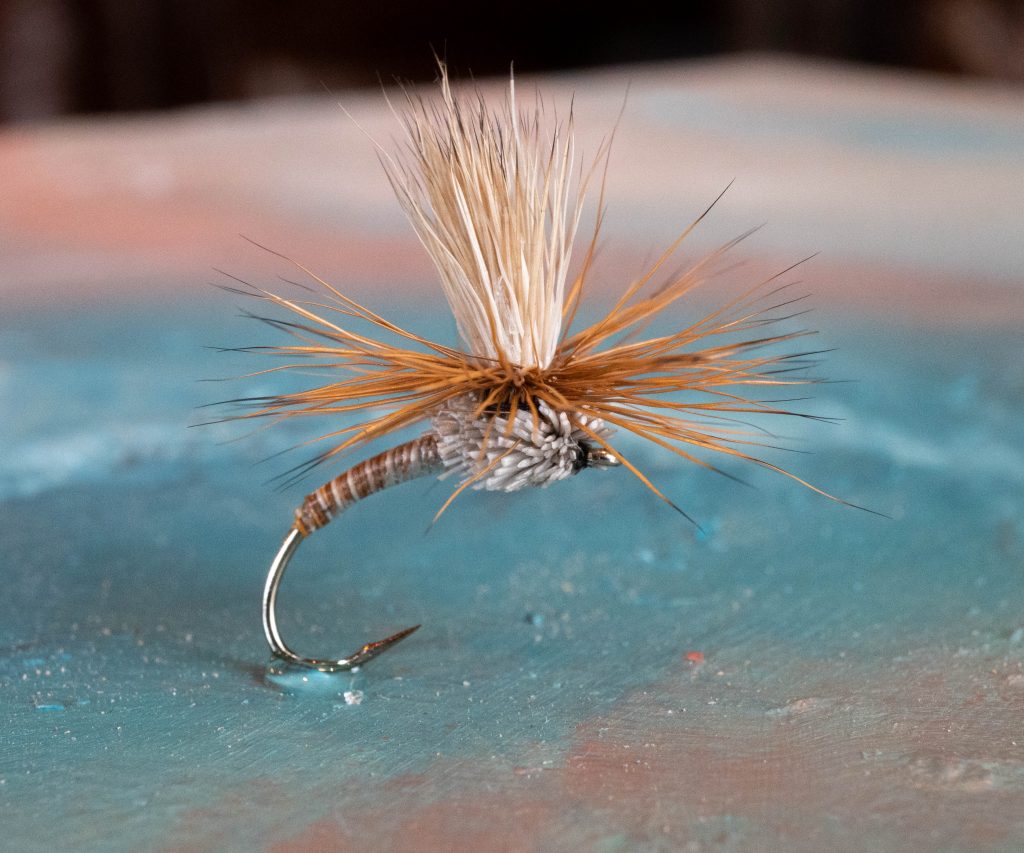 Dan Bruder — Brown Drake Para Spinner.  Judge’s Remarks: A quality-tied fly that you’d want to have in your box when you find that uncatchable trout. 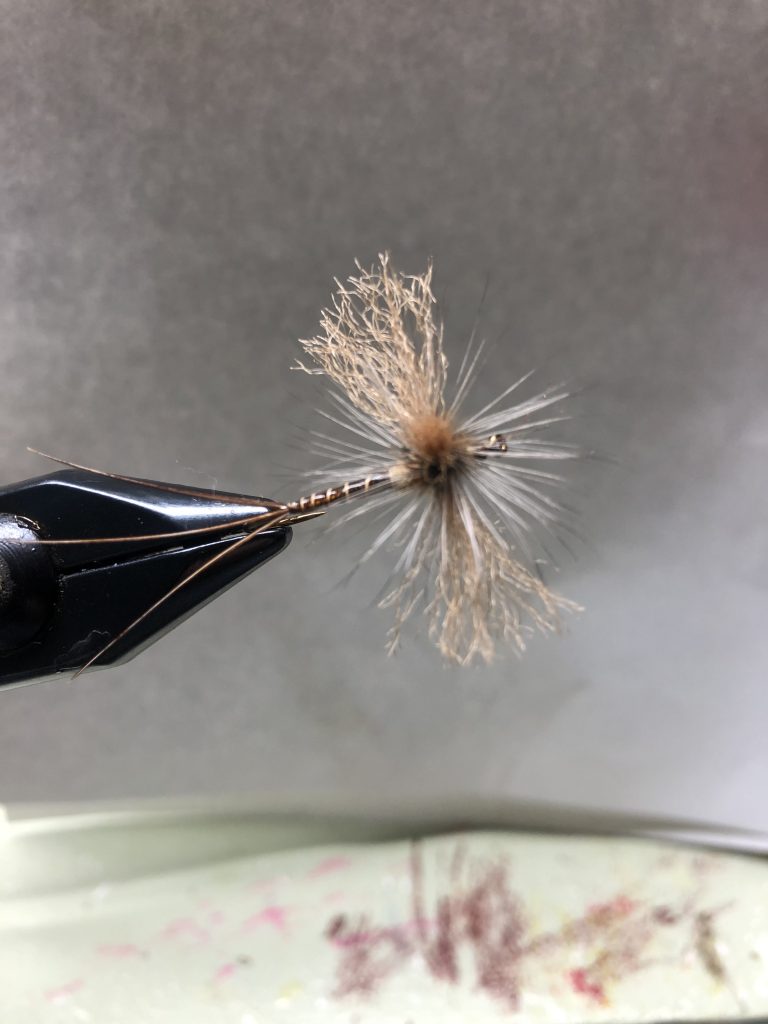 Dick Shaw — Salty Silver Badger.  Judge’s Remarks: I like the profile of this fly and the very minnow-like look of it.  Looks like it will swim very well.  Love the traditional feather streamer tie. 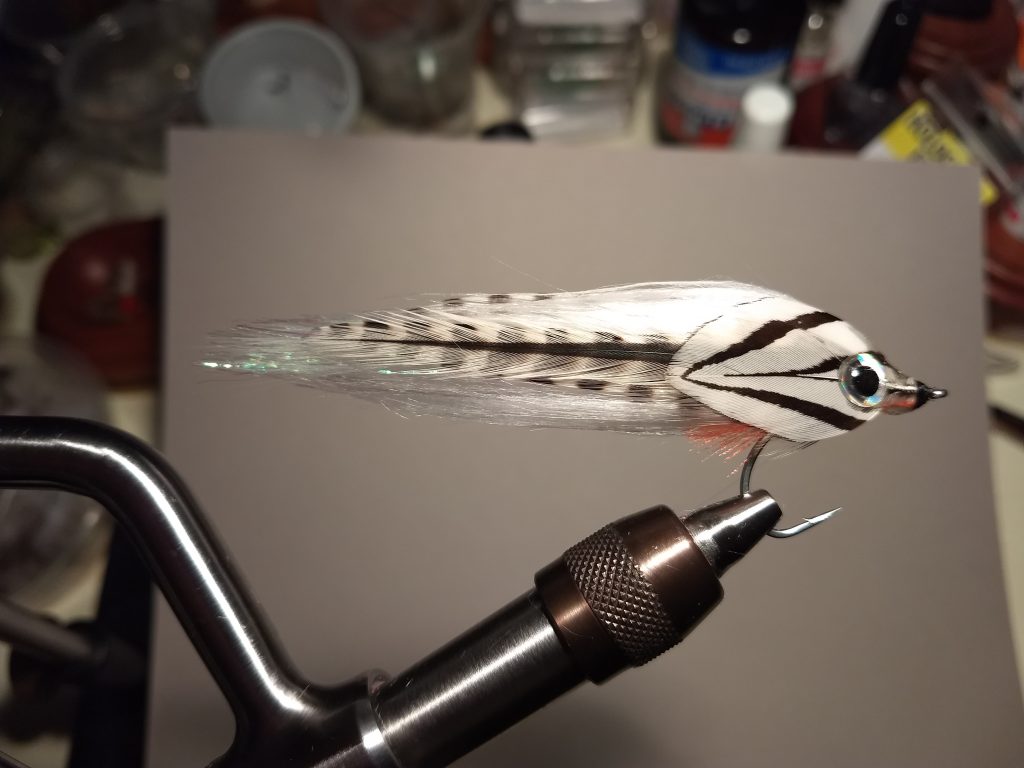 Thanks to everyone who entered.  It was fun to see everyone’s efforts.  Here’s a couple that cracked me up: 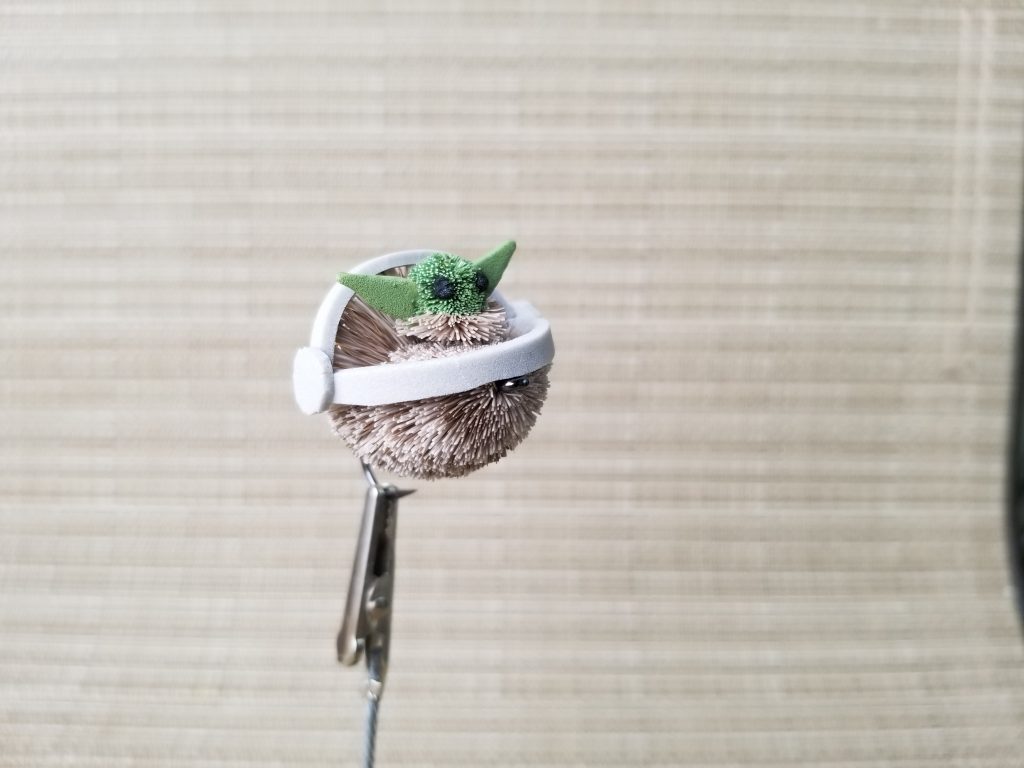 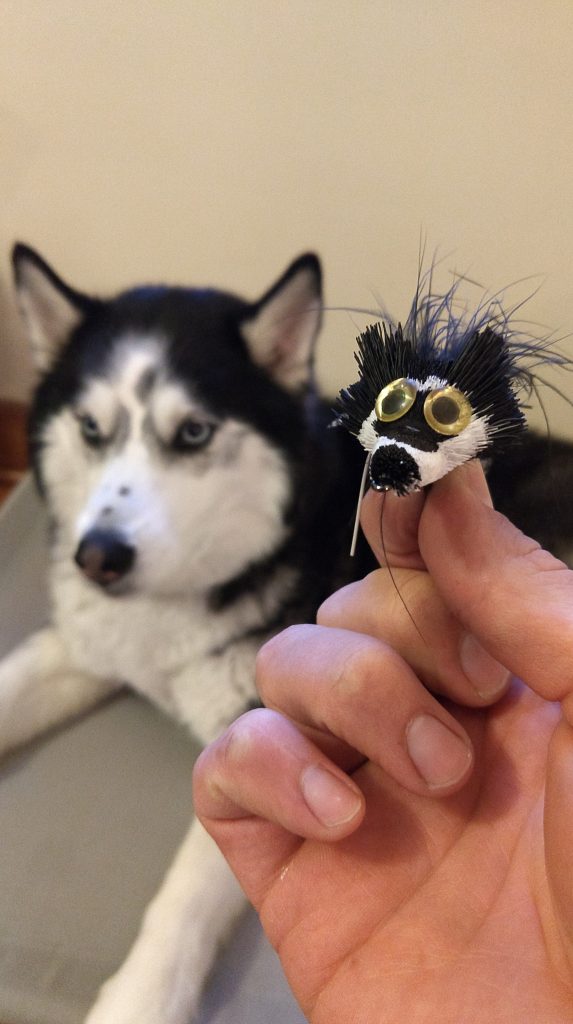