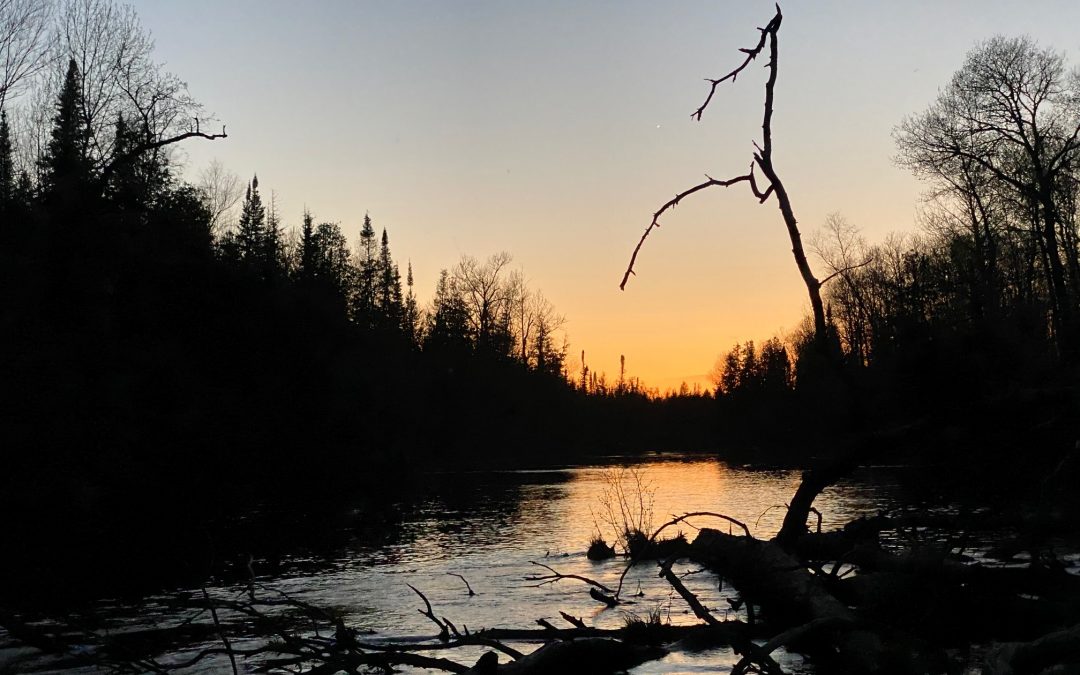 Pretty nice evening…a handful of different bugs, from spent caddis, to brown bugs, to henny spinners, and a pretty wicked sunset.  The high water dampened the mood a bit, but found a few pods of nice brook trout in the backwaters.  The best trout I saw rise was feeding off a little current turn, just moving all over the place.  I just about gave up on it — figured I’d lined it at some point as I was casting upstream — when it ate in a dramatic head-tail rise.  It was a fat brook trout, over a foot long, silver in the spring.  A sweet fish on a low-expectation evening.

On the drive out I saw not one, not two, but about ten whippoorwills.  This one began singing when I took its picture. 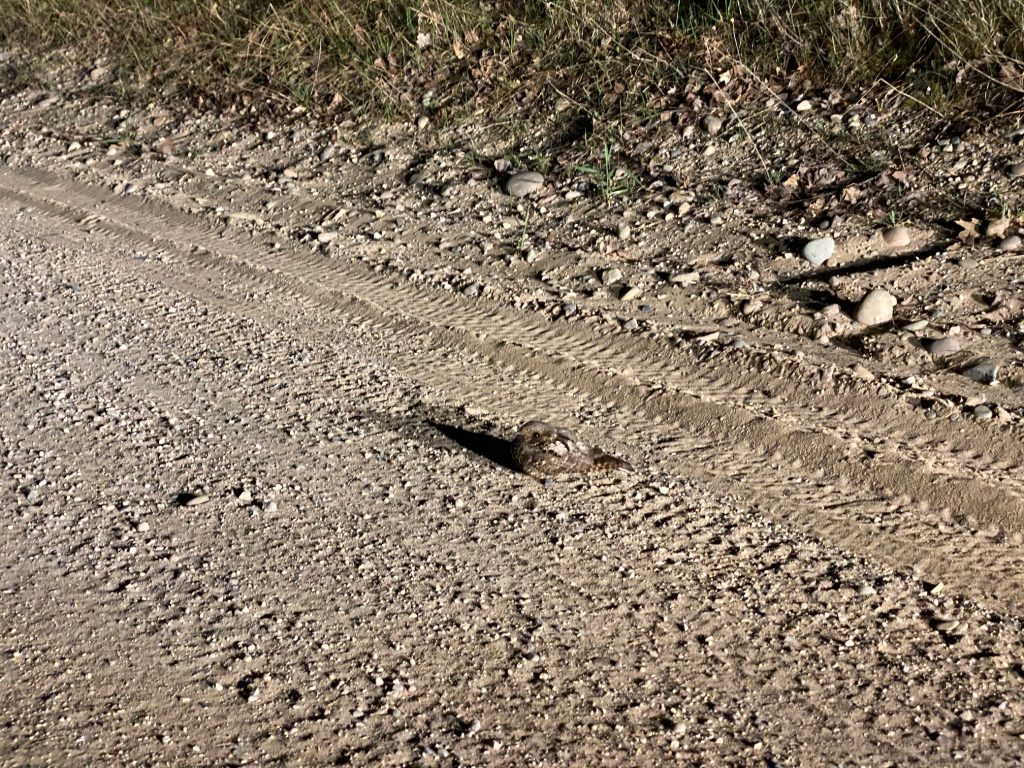 This last rainfall made the national news!  It’s obviously bad in other places.  It’s not too bad here.   Here’s the status:

South Branch of the Au Sable: The Lake St. Helens area received nearly three times as much rain as Grayling and, consequently, the South Branch is running too high to wade.

North Branch of the Au Sable: The North Branch has been fishing well this year and it should come into shape by Thursday if not before in the long stretch upstream of Kellogg Bridge.

The Holy Waters section of the Main:  Clearing quickly but will be carrying extra water into the weekend.

Manistee:  In good shape up high but will be very difficult to wade below Portage Creek. 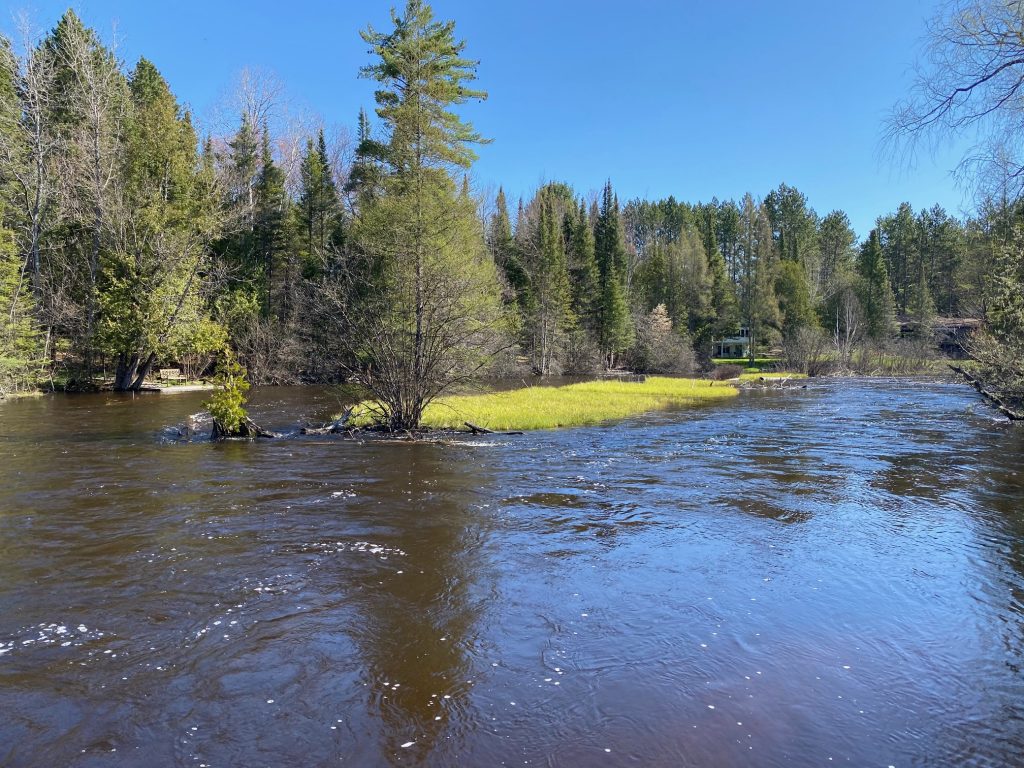 Holy Waters after the “fresh”…it’s clearer and lower now.

But this weather is beautiful.  It feels like spring should feel.  The black caddis and popcorn caddis are hatching, the yellow bugs are starting, yellow and olive stones are on their heels, thrashers (a great high water trick is to twitch a thrasher from the bank to the bubble line and then dead drift it), and then, in the evening, a mix of spinners, including both sizes of the mahoganies.  The river will be crowded this weekend, especially with the South Branch being pretty much out of the question even for boat anglers, but there’ll be opportunity for some good spring fishing in many stretches of river.  This high water came on the heels over very low and clear water…and, just like the last rain storm, it shouldn’t take too long for the river to recover.

I only made it out a few times this week.  On a good evening of spinners I spent all night trying to catch a trout that, two days earlier, had befuddled one of our guides.  It was a great trout.  No giant, but clearly the best fish willing to rise in the pool.  It was feeding along a fast chute of water.  Every once in a while, a piece of the chute would peel off into a backwater, and the trout would rise in the peel-off.  In doing so, the trout was actually rising facing 90 degrees to the main current.  I tried it from upstream, across stream, downstream.  I tried ever cast I could.  I used about six feet of tippet.  Worse yet, every time the fly dragged the trout would quit rising for about five minutes.  And the fly dragged pretty much every time.  The problem: the current that peeled off the chute was so much faster than all the surrounding water that it snatched the tippet and the fly and just yanked it taut.

It was an hour-long exercise and at the end, at last light, the trout loudly refused my fly and that was it.  It’s nice to be acknowledged, but it’s still rejection.

The rains came a day later, and I headed out to try some upstream streamer fishing on some new water.  That turned out to be fun and productive.  There’s so much to do on the river…the things to try are endless.  I enjoyed the upstream fishing, especially how it allowed me to work slowly across the swelling river and hit little pockets behind the sweepers.  It was methodical.  And tough wading.  But it worked. 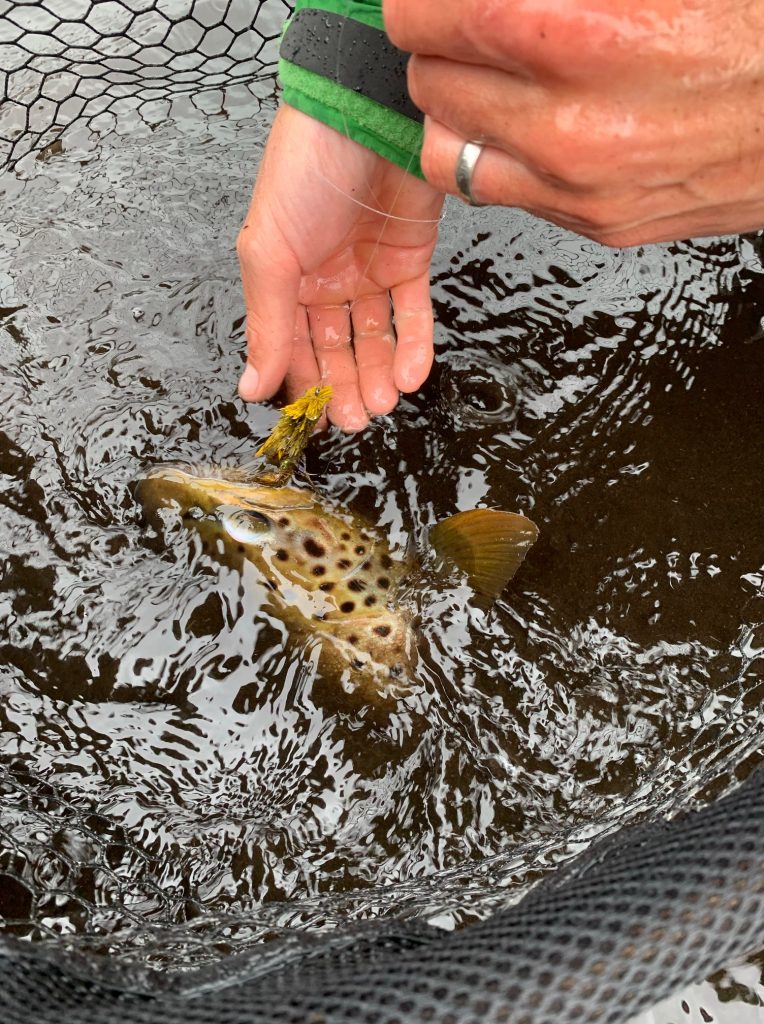 Matt and Willy made the most of the high water…

I’m anxious for some decent spinnerfalls and I think we’ll see some good evening fishing through the weekend.  Even in the high water, the “boat” stretches of river downstream of the major confluences can fish well.  Look for trout rising up near the banks, spend extra time in the slow sections, and smallish streamers are worth considering if trout won’t commit, or even show themselves, to the big flies.  One thing I’ve noticed is that once the water temperatures climb up into the high fifties and low sixties, the big trout become less desperate, and will spend some time drift feeding on nymphs.  A small streamer stripped across the ledges and bubble lines can find these nymph-eaters while still allowing you to cover water, which is important when the river is twice the size as normal. 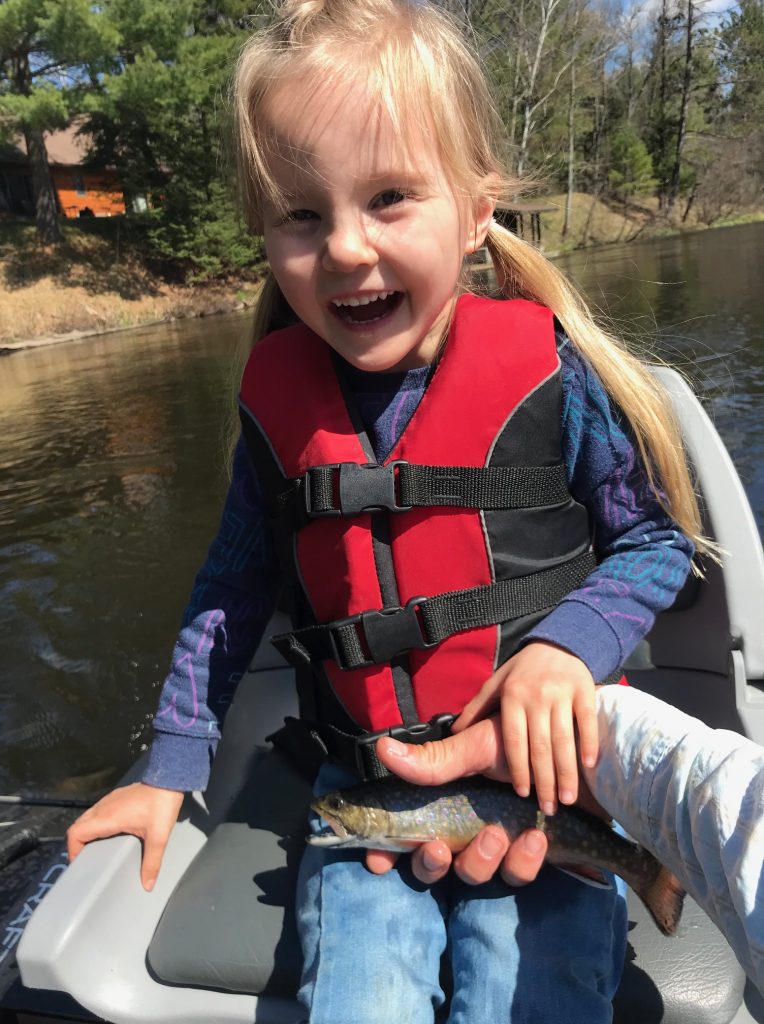 Despite the high water, I know that the very best of the season is right around the corner.  The golden hour will stretch longer, the trout will rise later, the hatches will increase in number and diversity, the leaves will spring out, the flowers bloom, and the lightning bugs will begin to flicker.  The magic is coming into focus, and quickly.  We’re as pumped as you are, amidst all the uncertainty and struggles, to go trout fishing.

Plans for the weekend

Restaurant:  The Restaurant will remain closed to eat-in dining.  We will be featuring an expanded take-out menu and we encourage diners to make use of our outside seating during what look to be a couple of beautiful spring days!   Keep up to date on our menu on our restaurant Facebook page: https://www.facebook.com/gateslodgerestaurant/

Fly-Shop:  It’ll be WAY too nice to be inside.  We’re going to have a sidewalk sale, test cast, demoing good time while the caddis flutter around the parking lot.  We’ll talk, drink coffee, test fly rods, and more.  Denny and Lance set this whole thing up today.  Gonna be sweet.  Can’t wait to see everyone…

The Shutdown Tying Contest is Closed!  The judges are conferring.  Sorry to hold you in suspense but certain judges had to go fishing tonight.