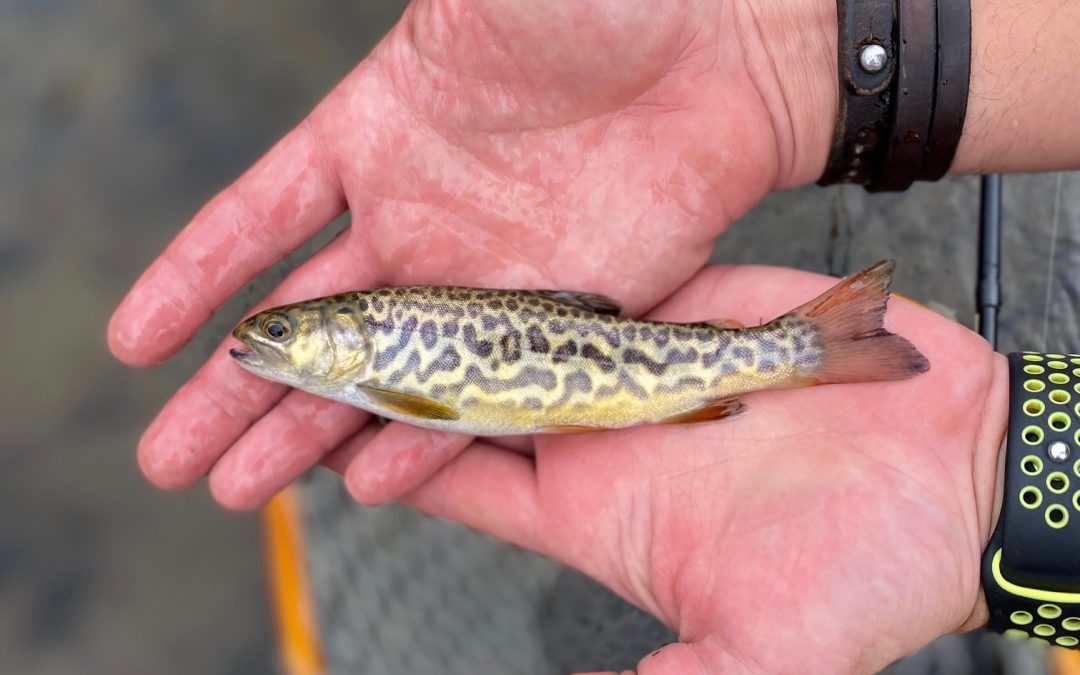 Well…it’s been quite a week.  The vast majority of folks were chasing the not-so-elusive hex over the last seven days and most were finding some bugs and some trout.  This is big game hunting, and I enjoy it as much as the next person.  It’s been fun.  I’m pretty tired.  The hex are hatching throughout both the Au Sable and Manistee but will begin to fade.  The hex don’t end abruptly.  They just sort of trickle out.  But the “trickle out” can be some really great fishing, and as the fish begin to search for new sources of food to accompany their hex-laden diets, they rediscover all the other bugs that are still hatching, from sulphurs to stones to Isonychia…and soon enough, the #18 olives.  This is the beginning of that overlap. 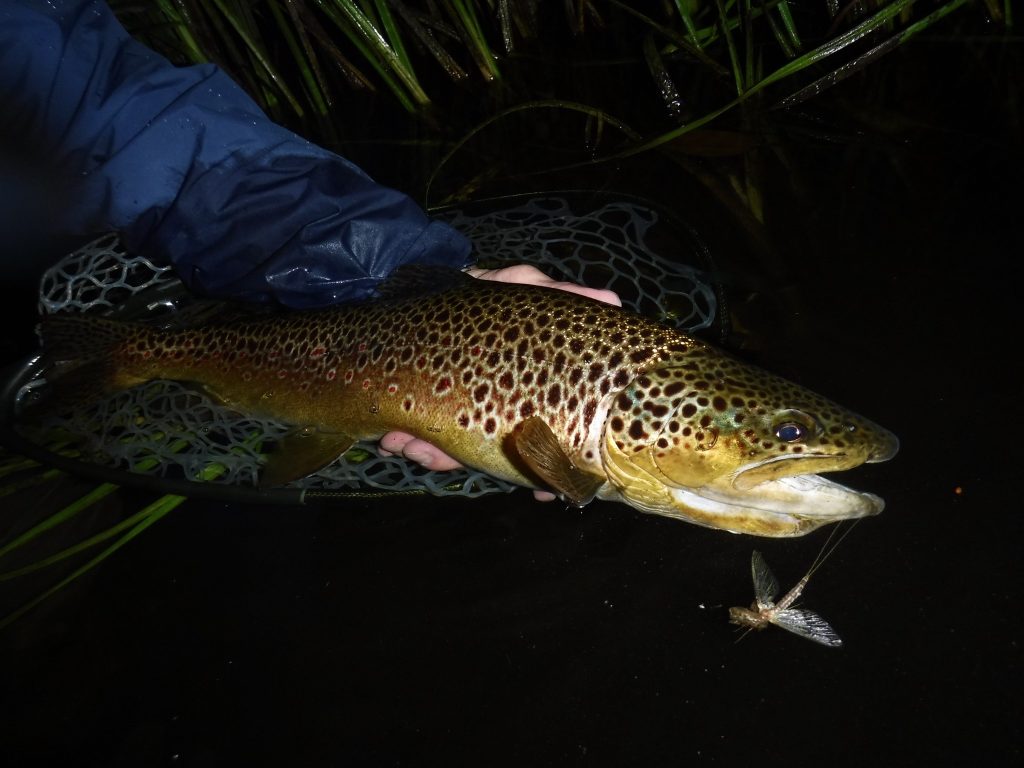 Keith with a good hex fish

A change in the weather dropped some rain and the rivers are high and stained right now but should drop quickly unless we get more rain tomorrow.  The trout continue to show a willingness to rise, and several great fish were caught pre-hex by those waiting on the big bugs.  My favorite trout all hex season was roaming a pool of the South Branch eating Isonychia.  I finally tracked it down and caught it, a great start to what turned out to be my best evening of hex fishing this week.  It wasn’t the biggest fish of the night, but it was the angriest. 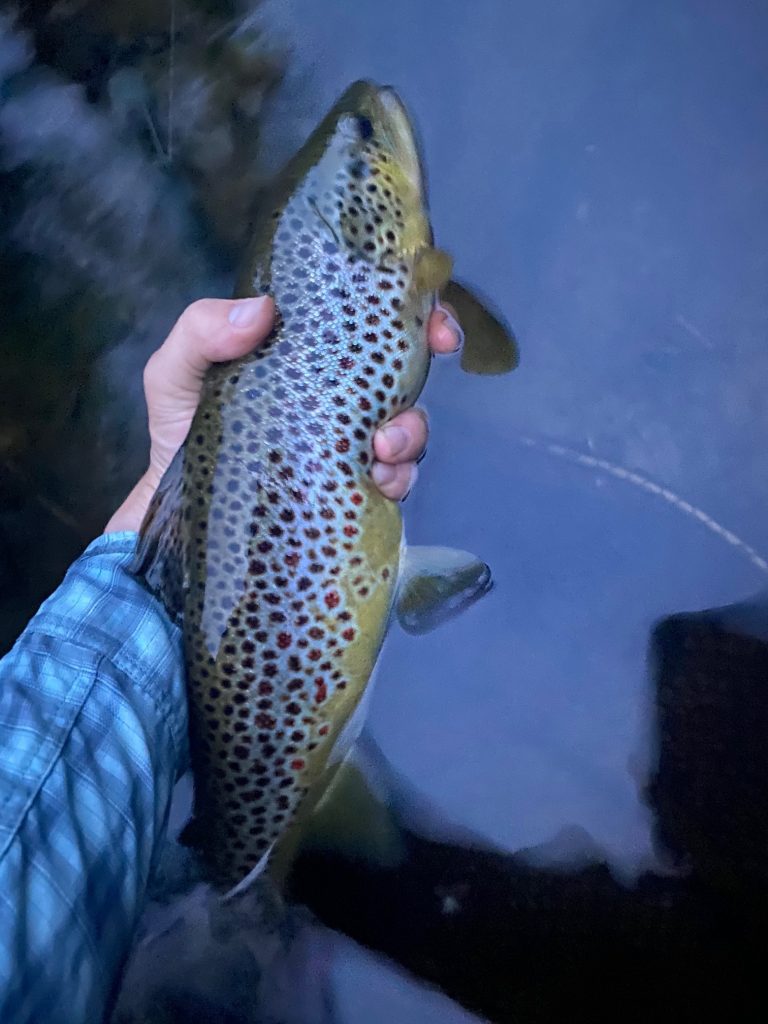 All sorts of great things come to those who wait.  A few nights ago, as I huddled in a little cove reading a book and waiting for bugs, a few deer walked right in on me.  I turned slowly and found myself face to face with a doe.  It was so cool.  Theh began grazing on the grass.  They knew I was there.  They just didn’t care.  I kept reading my book and they kept feeding.  At dusk, the trout began rising.  I liked having the deer there, but, well, I was there to trout fish.  I stood, and they blew and bounded off.

There’d been one trout that I’d found the night before, a big one that I’d found a split second before the rain came.  So all night I was thinking about this big fish, and all the next day too, and so when I clocked out I knew right where I was going, and how I’d approach, and where the cast would come from.  I could imagine flicking my light on and seeing the big trout slide into the cone of illumination.  That’s such a breathtaking sight to the night fisher.  So as I’d been reading my book with the deer feeding behind me, I was thinking about this trout.  And when the hex fell, and the other trout kept feeding, I was thinking about this trout still.  And then he showed up, rising right in front of me, just as I imagined.  He ate on the first cast.  It was a sweet revenge to Friday night, which was the worst night of hex fishing I’ve ever had, in which seemingly everything went wrong:  a hilarious succession of events that didn’t seem too hilarious at the time.

This next week is going to be sweet.  I love this transition, as the trout angler chooses between chasing bugs and chasing trout.  Eventually the hex will be confined to the coldest reaches of rivers, and the summer bugs will begin to hatch and intermingle.  We’re already doing well with terrestrials and attractors, we’re finding pods of fish rising in the morning, and in the non-hex water there are the sorts of evening rises (saw one last night) that we were craving in May.  Along with a box of hex, make sure you have Isonychia, Roberts Yellow Drakes for the cahills, smaller Borchers and purple patriots for the BWOs, smaller hex for the tough feeders, deer flies, beetles, and maybe even a few grasshoppers. Oh, and a lot of different sizes of stones.  This rich and varied bug landscape is some of the very best of the year, and the trout fishing becomes a truly 24-hour thing. 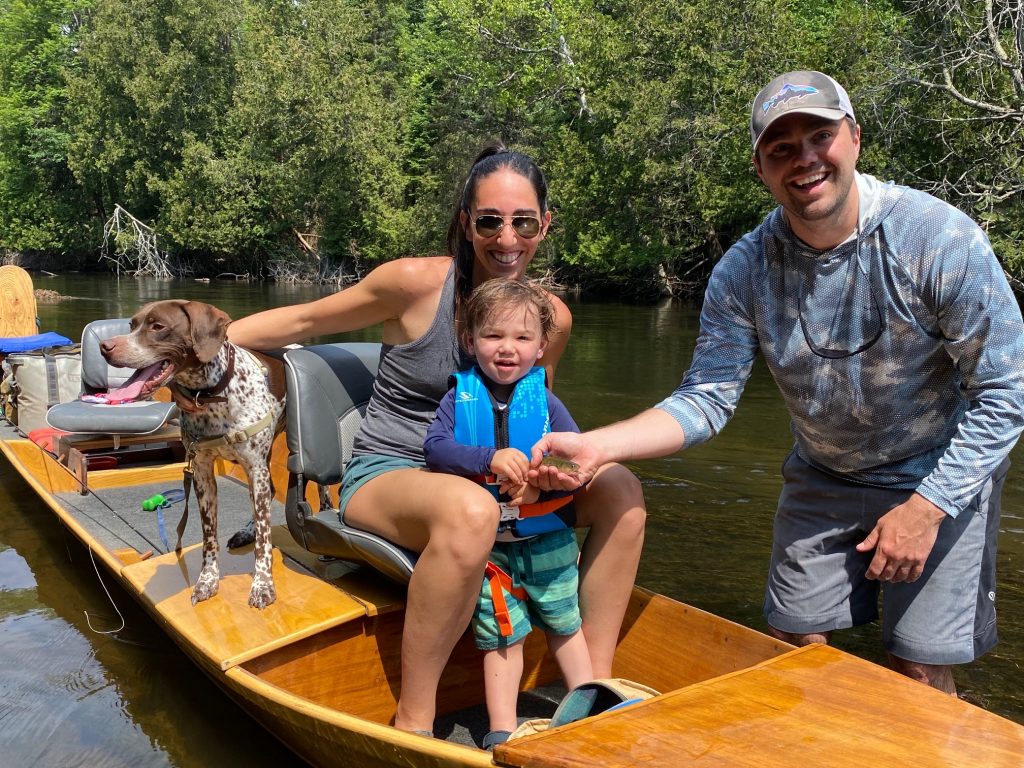 Car spots:  Just like last year, our car spotters simply can’t keep up with demand and we will have very, very limited shuttle services over the next two weeks.  Please plan accordingly.

Thanks!  A lot of kids rods and reels showed up and already I’ve been able to gift some.  If you have rods and reels to donate to a kid, just bring them by the shop!