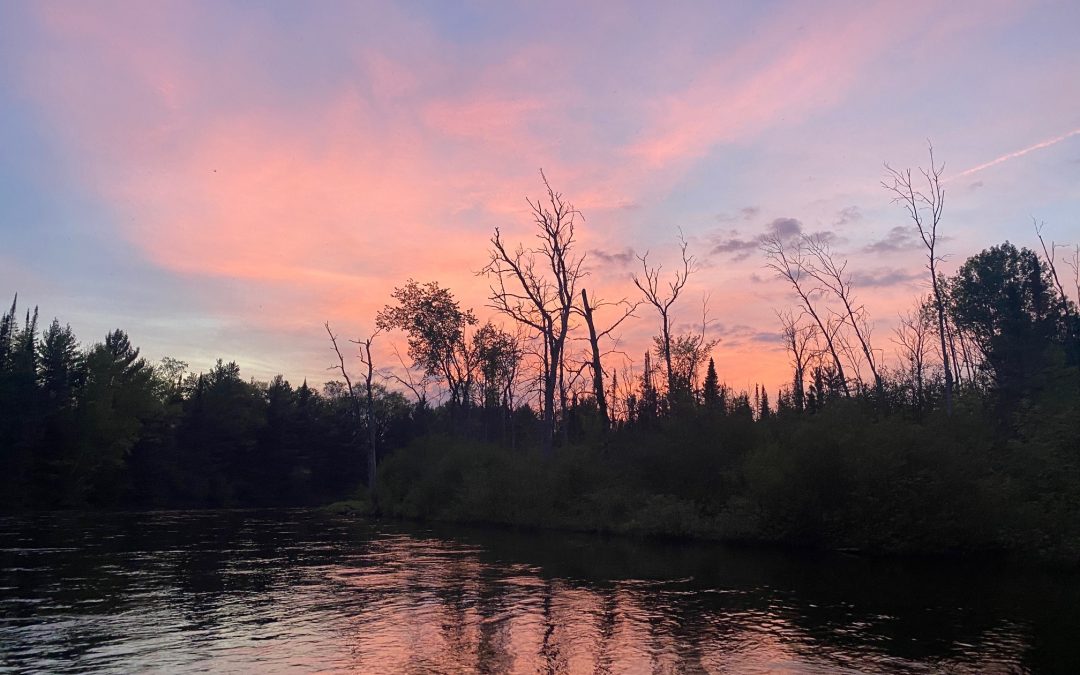 This weekend, we’ll be draking under the moon.  I know this, because tonight I was draking under the moon and I just got back home from it.  Midnight came early.  I had to dump out my waders and now they are on the boot dryer.  I took not one but two swims tonight trying to get into position on two different big trout.  There are limits to what you can do in high water. 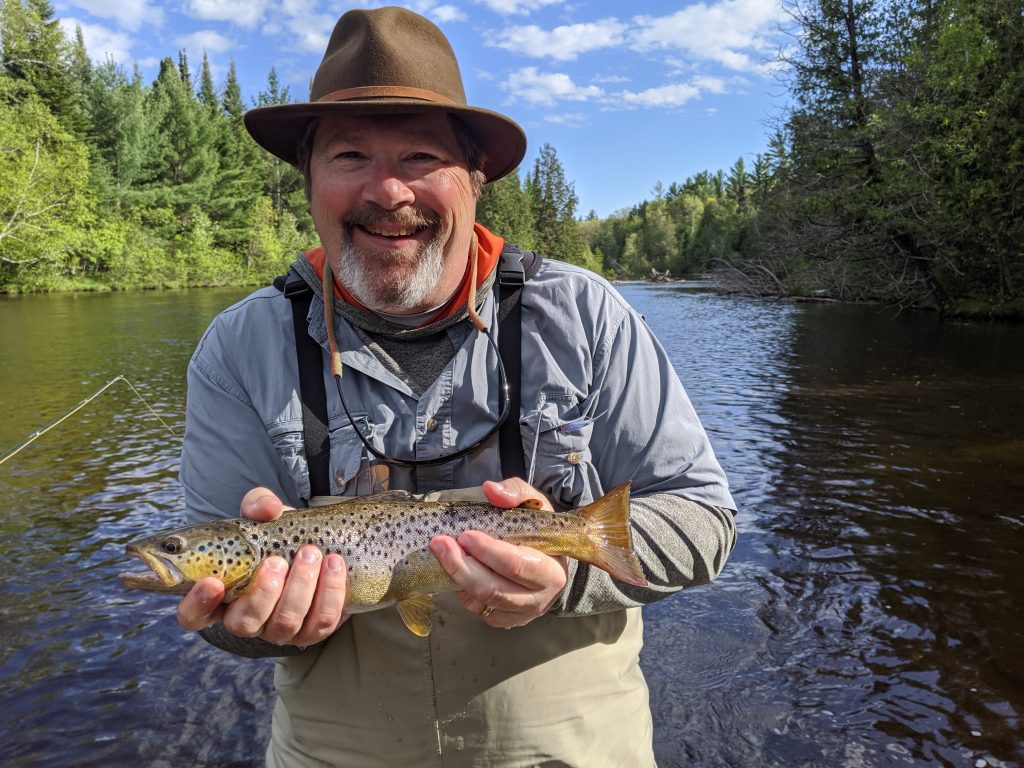 John with a daytime beauty

The first swim was more of a fall really.  I was casting at a decent fish early in the spinners and I heard a much larger trout rise upstream.  In my haste I walked into a log, tried to do that big step over it — the ol’ leap of faith — and my toe caught the log and down I went.  I recovered, caught the decent fish, never heard the big fish rise again, and headed downstream.

The stretch of river I was on is special to me for a number of reasons, but it began with the Magic Riffle many years ago and a surprise hatch of hex. Since then, I’ve called it the Magic Riffle.  Almost every river has a magic riffle, and I know of three on the Au Sable, and this is the one I love the most.  It’s not much to look at, but it has some secrets.  The first secret are the three gravel shelves on the north bank which big trout like to surf, rising quietly.  The second secret has to do with the jumble of logs on the far bank, which keeps these same big trout safe during the day.  And the third, biggest secret is that the riffle is lined, on the shallow side, with some of the most drake and hex rich muck I know of.  There are also some sub-secrets.  One is that it flows into a pool I call Beautiful Bend as I think it must be the most beautiful bend in the river (though rarely the most productive).  The other sub-secret is the backwater above Beautiful Bend, which most years harbors a few very large trout.  It was in pursuit of one of these very large trout that I took my second swim of the evening.  And this was an honest one.

The trout rising there was clearly the largest trout I heard rise all evening.  I heard it from the far bank and so I naturally I waded out to get into casting position.  The high river made this tense wading, and loud.  It was so loud, in fact, that when I was in the middle of the river I couldn’t hear the trout rise.  I backed out, and the trout rose.  So I forged back to the middle of the river…and then beyond it.  The moon showed the currents well and I thought if I could get into the edge of the backwater maybe I could be both fifteen feet from the trout and in the quiet water.  But I could not.  The last step was one too many, and I couldn’t recover.  This wasn’t a slip…more of a swim.  It wasn’t nerve-wracking, just frustrating.  I found my footing and slogged back to shore.Che

By now the trout along those gravel shelves had begun rising to the hatching drakes and with the moonlight it was pretty simple fishing to wade up in knee deep water and take three nice trout from behind the bottom shelf.  They were strong fish, and the biggest I couldn’t hold in one hand, even if it wasn’t terrifically long.  They were in perfect condition.  It was a fine night.

So…the drakes are on.  With the heat, they are spreading quickly through the Au Sable and Manistee Rivers and should be joined by the Isonychia very soon.  This is balanced and diversified by the sulphurs (both 16s and 18s), the yellow stones, the golden stones, the thrashers, the last of the Borchers drakes, the March Browns, and probably a handful of other flies that I’m not thinking of.  The fishing up until this point has been rather hit and miss.  The rivers are all stained and slightly to pretty high.  The weather has been all over the place, from 50s to 90s, in the course of a week.  This led to some good streamer fishing: 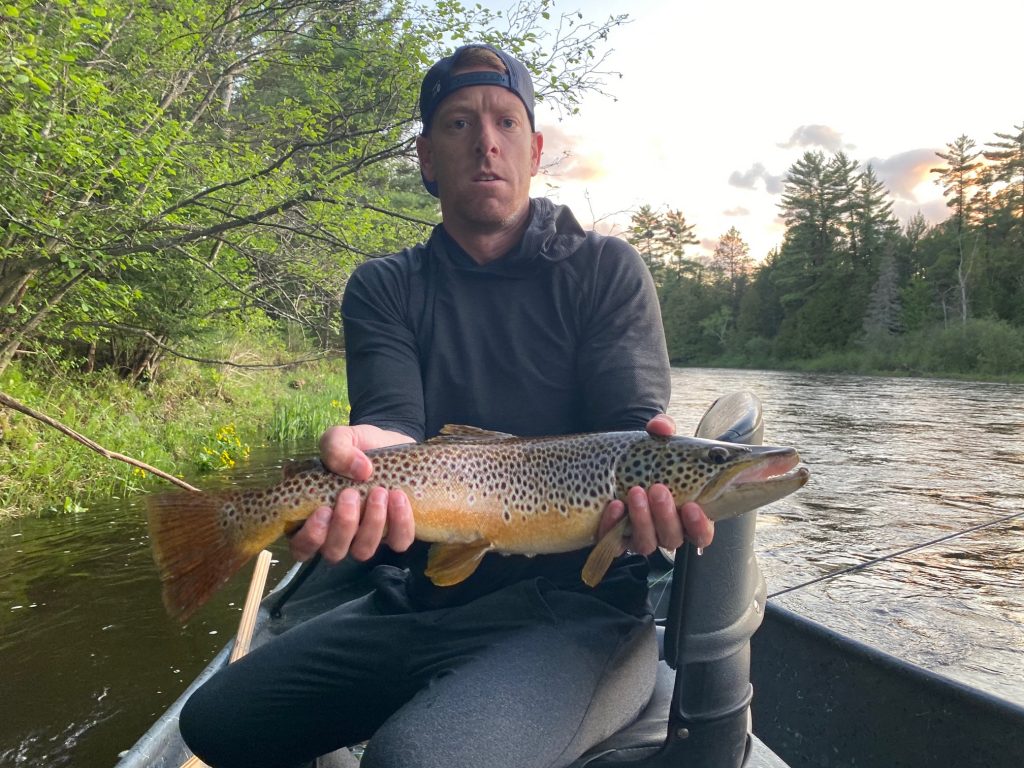 And some good dry fly fishing: 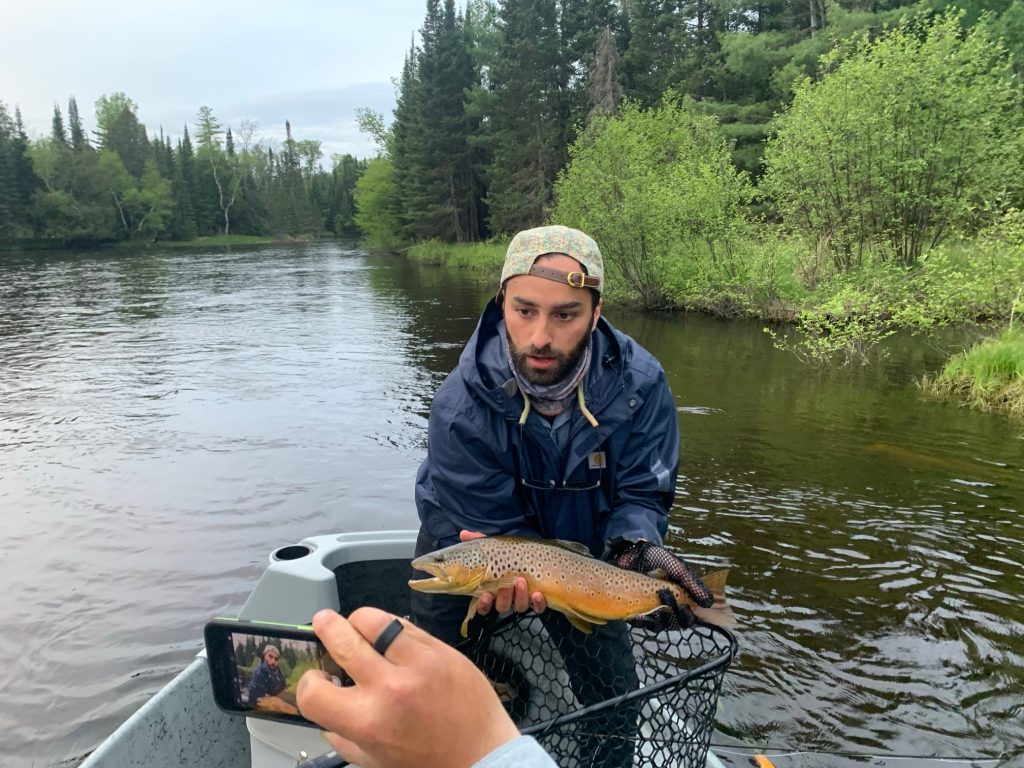 There have been some awfully slow days mixed in and I feel if the weather would just stabilize we’d have some nice fishing.  As it is now, the forecast is pretty solid, stable, and fine.  A cooler weekend is going to push the spinners earlier and will also provide some thermal refuge for the trout.  I’m excited for the change of the season.  This was probably the worst “brown bug” season I’ve had on the Au Sable.  The weather was too hot for them, and the water too high.  But a good night of drakes has righted my fish-energy ship, and I’m ready for another night of rising trout.  That was fun.

We are locked and loaded for June.  Bins of flies, piles of waders and boots, rods and reels, some (hopefully) good advice, coffee, great food, and more.  It’s different, but as same as we can make it.  We are offering inside and outside shopping in the fly shop, and to-go/outside dining in the restaurant.  It looks like a beautiful weekend to be a trout fisher.  Thanks for the support this spring!  It’s time to go fishing.