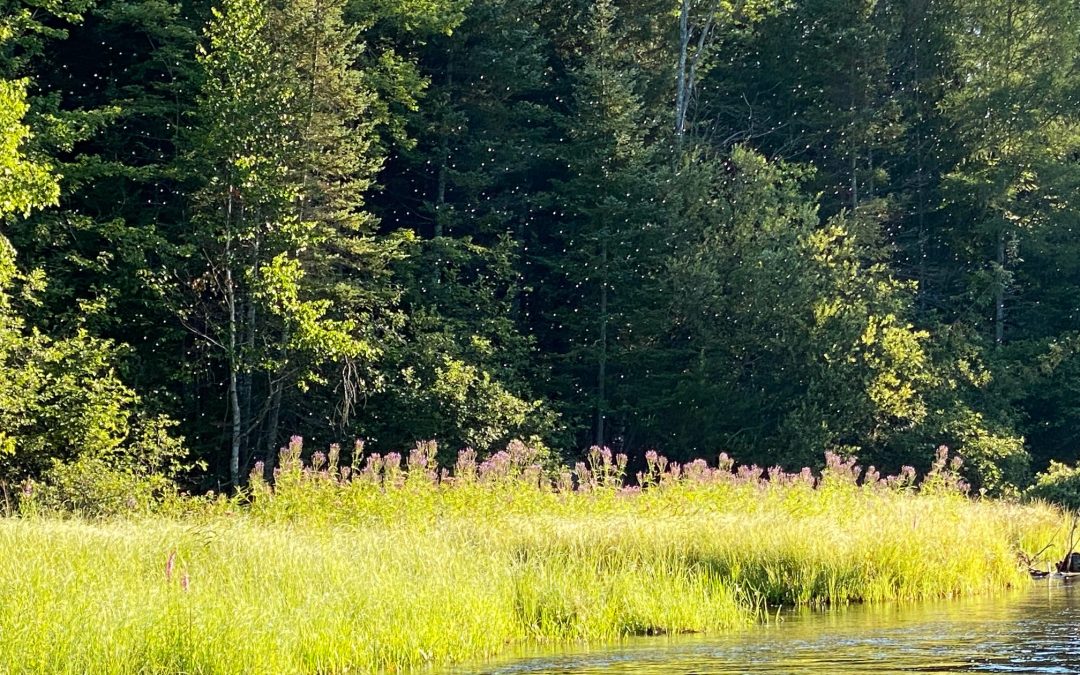 In Ohio, August was a stinking hot month.  On the Au Sable, the second half of August is usually the beginning of fall, and knowing that we’re a month out from the reddening of the river maples and fall change makes me both anxious for the fall, as well as desperate to squeeze the rest of the summer out of 2020.  So I’ve made a personal hit list!  I need a good day of creek fishing.  At least three evening spinnerfalls.  White flies (coming soon).  A day of skunking.  And a day of summer small streamer fishing.  I’ve hit tricos well once, but the clouds of bugs in front of the lodge make me think that I haven’t hit the best of it.  And I’ve heard cool things about a new sort of summer-time nymphing that, yes, I need to do as well.  That’s a lot to squeeze into a month, but I’m going to give it a shot. 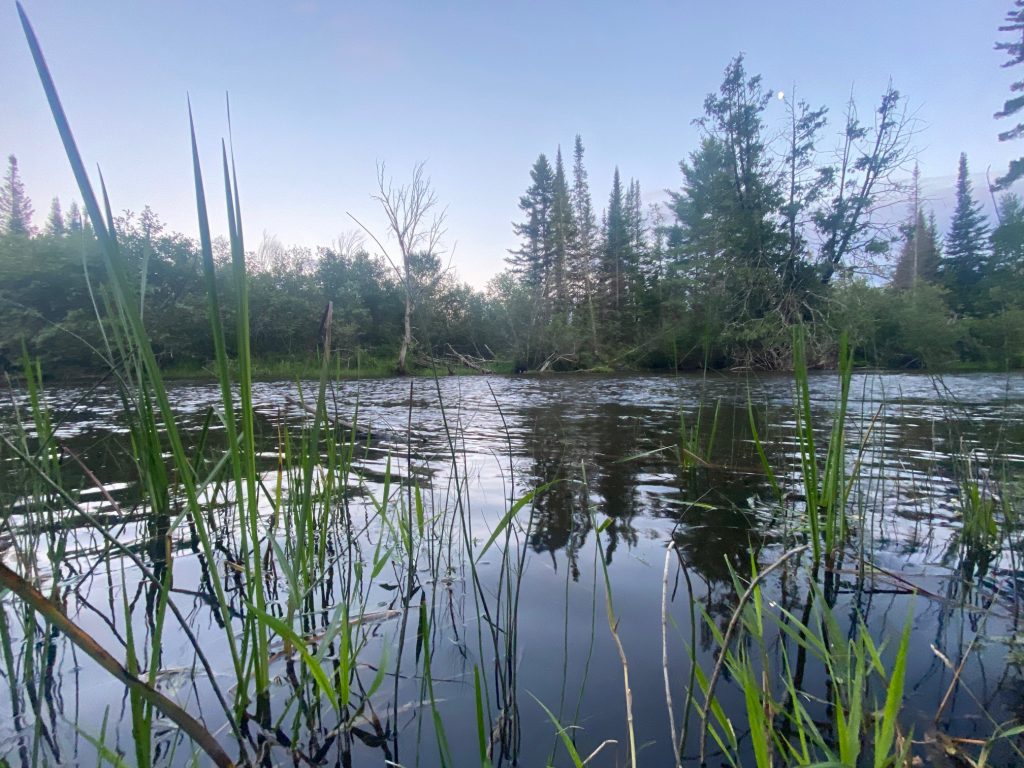 But the night fishing has proven pretty tantalizing this year.  The other night Lance and I went down to the South for some evening BWO spinners.  It was pretty slow except right at dusk, when I caught a nice brook trout and had two really nice fish rising under a couple of sweeping cedars that each refused me, or I missed.  In walking through the woods I got some kind of demon caterpillar on my neck, which felt like a thousand no-see-ums had decided to bite me at once.  Two days later, and I still have hives.  I went home to put ice on my neck, and Lance started night fishing and just tore them up.

There have been some very nice trout caught at night. 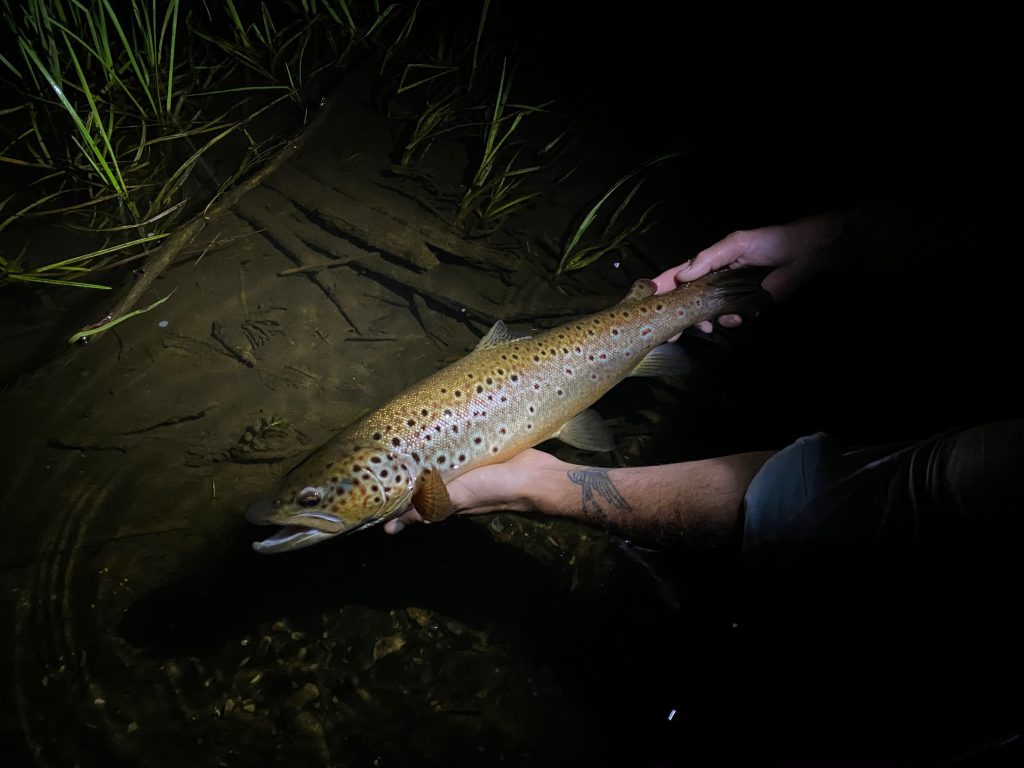 The water temperatures, river levels, and forecast are all very good right now.  The tricos and #18 olives are hatching throughout the morning.  An irruption of spruce moths have made for some very good daytime fishing with Potter’s Fathead Moth fished on fine fluorocarbon tippet.  Small caddis (tan, and dark dun) in the early evenings are joined by the tiny olives and the bigger olives spinners.  Light cahills right at dusk can get some good fish rising, and despite the traditional light cahill fly looking right, I do best with an Adams parachute.  The orange sedge — a nocturnal bug — is hatching now and its presence, along with the spruce moths, makes fishing a larger caddis imitation doubly productive.  The daytime fishing has been pretty good most days.  Exceptional at times.  It’s pretty easy work just taking a nice summer wade and enjoying the target practice. 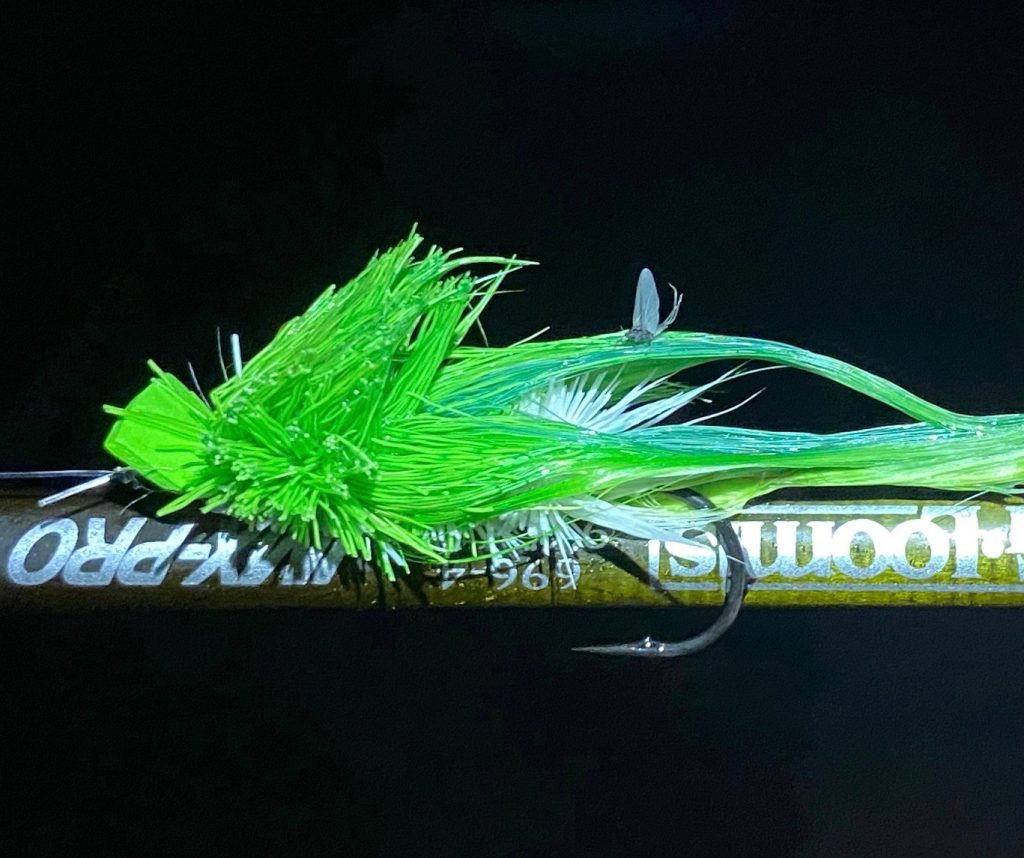 My friend John Bebow sent me a little write-up that I wanted to include in here:

There are so many ways to go sleepless in River Country.

It’s very different from June, yet things go bump in the night on summer’s back side. Maybe even more so among nocturnal creatures, some of which wander freely across deserted boat launch parking lots.

I arrived at the Linger Longer porch Saturday evening in time to talk books with Sarah and pet the puppies before Greg, Jordy and I towed the drifter to one of the many great lakes in the area. Greg and I worked fly rods twice as hard for half the fish as Jordy nabbed the better bucket mouths with spin gear. The fishing is always serious with those two extremely fishy fellas, but filling the net was probably less than half the point. We had just enough ice-cold beer to responsibly whet our whistles and enjoyed the scent of beach campfires while circling the lake in our shorts, t-shirts and bare feet well after dark.

Spend enough cool summers up here and you come to appreciate the rare month-long heat waves. It just means overlooking dreams of trout rising to olives in an all-afternoon drizzle. That’s the thing. There’s always something awesome to do on the river, but not if you’re a prisoner to past experience.

I built this quick trip around Sunday – a guide trip with Matt. Remnants of a tropical storm literally blew away our annual “research and development float” in early June. So, Sunday was the raincheck and it looked for a minute like I’d need a raincheck for the raincheck. It rained in walls of water shortly before dark. But Matt saw a window behind the storm. Indeed, the window proved wide open for a great night of mousin’. We netted five big browns in a two-hour bite window. Another five fish got the adrenaline pumping but were just playing with their food. A better angler could’ve netted several more, but this was my first mousin’ of the year and it took a while to dial in the hookset.  That’s my excuse, anyway.

Part of the sleeplessness this time of year is the early morning anticipation of aimless adventure. Why sleep when the warblers are already singing and the unpredictability of the day lies ahead? Yesterday was an off day for John Sheets.  If you don’t know him for his breakfasts you might know him for his fly-tying artistry. We started texting mid-morning, hatching a creek exploration plan. Didn’t bother checking river gauges and forgot all about those sheets of rain the night before. We found three temporarily blown creeks in a sixty-mile circumnavigation of the north country, only to end  up back on a fairly clear creek five minutes from where we started. In the end, I don’t know what happened to John. We stopped back at camp, I promptly fell asleep, and he took off on his next adventure. I awoke to pink sky on the western horizon, with just enough time to get my act together for gurglin’.

There’s plenty of debate on this topic, but Gator taught to mouse downstream and gurgle upstream. So, I usually end up mousin’ out of a boat and gurglin’ on foot. Last night was a mucky wader night. I wasn’t exactly trespassing – the owner lets me fish there – but let’s just say a door-slamming approach would’ve aroused suspicion up the road and it seemed safer to take the darker way. That’s how I ended up waist-deep in muck. The toughest gurglin’ wades often prove worth it. In this particular spot, I’ve caught ‘em over the years in six inches of ambush water, out in the middle on the shelf, and up in the deep current off the root ball. Last night, it was on the root ball. The fish sucked in the gurgler in the greedy way you know you’ve got him. He took line like it was a lasso rope at the rodeo. And dove into the root ball like he owned the place. Bye-bye, big boy.

Again this morning, there was no time for sleep. PB finally announced himself after a season of prudent COVID caution. You can’t miss a chance for coffee at Gates Lodge with PB. It’s about books, business acumen, fishing adventures large and small, and life lessons the man might not know he’s giving… I’ll take my java black with a shot of wisdom. And there goes the morning.

The breeze is blowing pretty good now. The ant and hopper rigs are lined up. (If you’re among the morning trico or afternoon terrestrial specialists, take a gander at the 10-day forecast and figure out how to get up here and put the distance into social distancing.) Maybe I’ll wait a while and open one of the few leftover hex season beers in the fridge. Chris Guest just called to announce his daily toils complete – so he’s on his way to camp. He wanted a plan. I suggested the plan might be no plan at all.

Who knows what’s ahead tonight?

It probably won’t involve much sleep.

We — Anglers of the Au Sable, others — are working on creating a virtual sign-up for river cleanup because, Coronavirus or not, we still have to clean the river.  The weekend will be the Saturday after Labor Day, we’re going to do the upper, middle, and lower river, and more details will email soon.  Mark your calendar and let’s make it happen.

Other than cleanup, the calendar is pretty clear.  We are open everyday from 7 am – 7 pm, our guides are staying busy but we have great openings into August, morning, noon or night, and the restaurant is serving great food be it riverside dining, take-out, or room service.

Get your fall trips planned out before the snow starts to fly.  This is one of the best times of year to experiment, scout new water, and just enjoy some river time and river adventure.