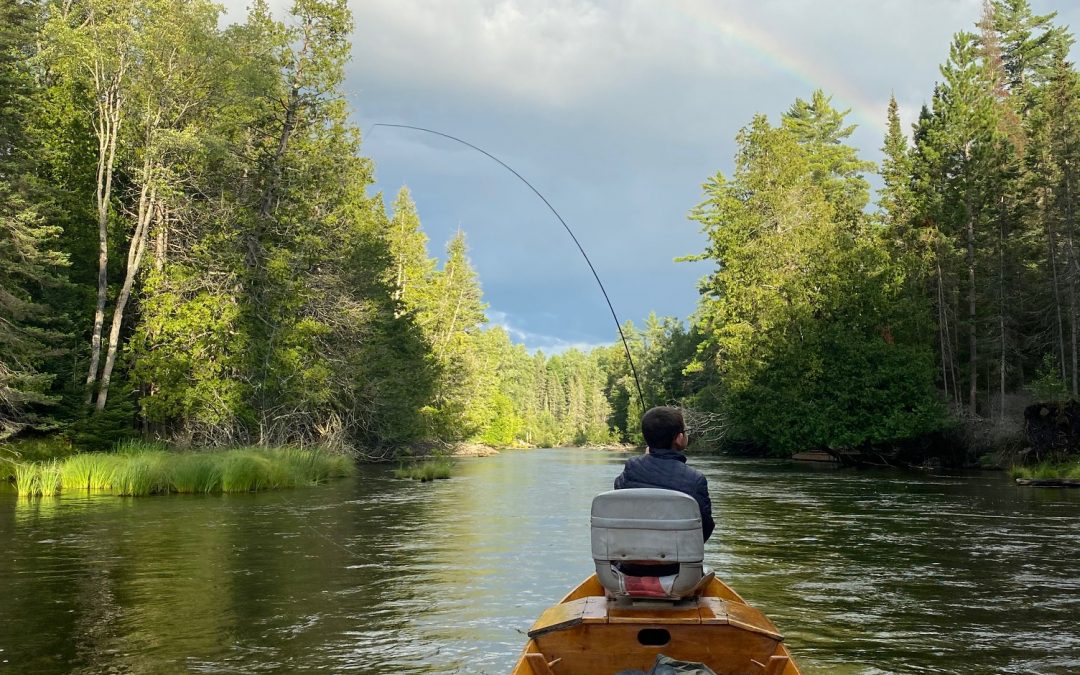 What a great week of fishing.  It’s been cool, cloudy, wind-free, and wonderful.  That alone is enough to enjoy.  But the nice water temperatures have made for lots of feeding trout, and several days we’ve enjoyed trout rising throughout the day.  Yep.  That’s good.  I got out to enjoy it for a few floats with my family.  On a beautiful Sunday, a mix of rain, clouds and sun, Holden and I did a short float.  I fished a small streamer from the back of the boat while Holden fished a dry fly in the front and we both did quite well.  That’s fun fishing.  He chucked the yarn skunk around and raised some nice trout, but his hookup ratio was better on the small Purple Daze.  The trout were on and off feeding on small olives.  There are two options: match the hatch (which is fun, but painstaking) or just paste the Purple Daze over every rising trout until one decides to eat it.  That is much less painstaking, and just as fun. 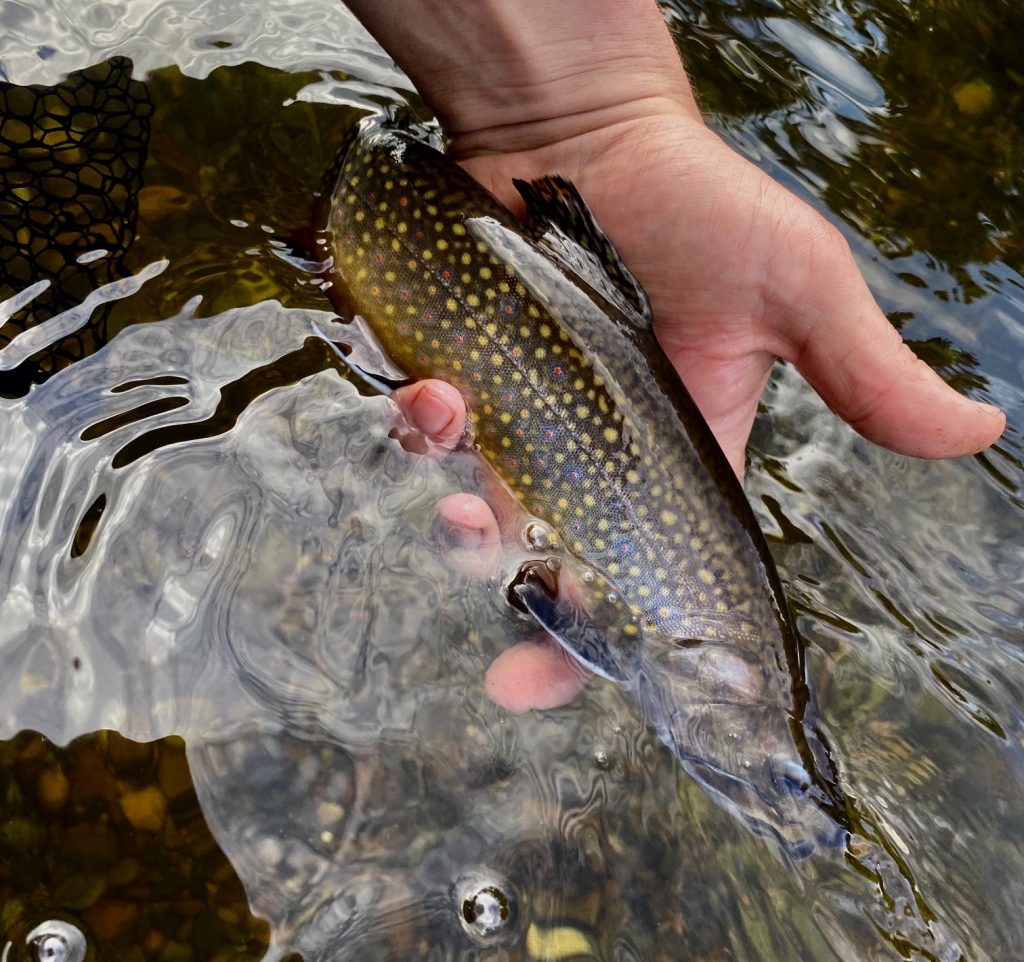 One of the struggles this time of year is the hatch.  The bugs that hatch this time of year, at least the bugs hatching consistently and in great numbers, are small.  Aside from the size 18 olive, the tricos and little blue wing olives are tiny, and maddening.  Now, I love the tricos, if only because the trout rise to them for a couple of hours and that’s enough time to work a few pods of risers.  But that evening olive hatch and spinner fall can be a twenty-minute exercise in frustration.  With darkness approaching, it can feel like you’re trying to defuse a bomb, and the clock is ticking.   7x or 8x?  Brown body or olive body?  There are several remedies to this conundrum. The best is to fish the 7x with a #16 Patriot and hope that it works.  The second best is to add 8x and a size 24 to the bend of said Patriot and, when it does work, feel self-satisfied that you went the extra mile. 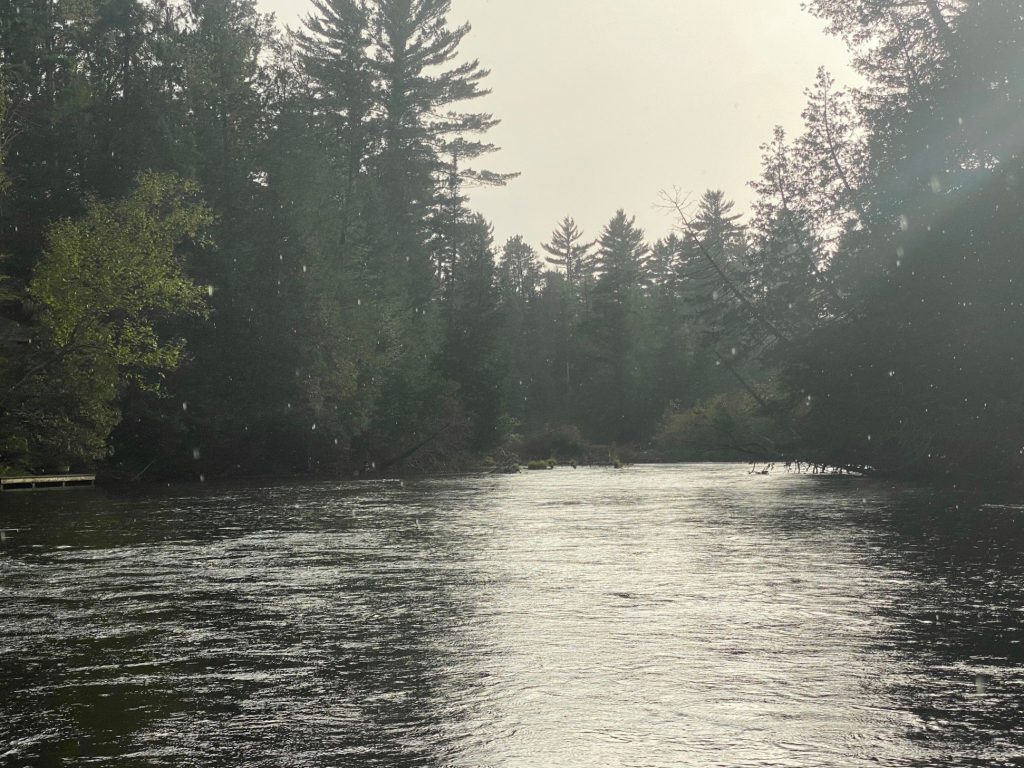 A little midday rain woke the fish up

Yesterday evening, when faced with this same dilemma, Katy and I decided on the same small Purple Daze and that fly caught just enough to feel like we didn’t have to size down any further.  It’s a weird feeling, fishing the wrong fly to a pod of risers, 90% of whom will only eat the right fly.  But if you’re okay with the 10%, and if you figure that even if you did match the hatch, you still would probably only, at best, catch another 10%, you kind of have to shrug and figure you did about as well as you were going to do.  No one catches 100% of the fish in July on the evening rise.  At least no one that I’ve fished with. 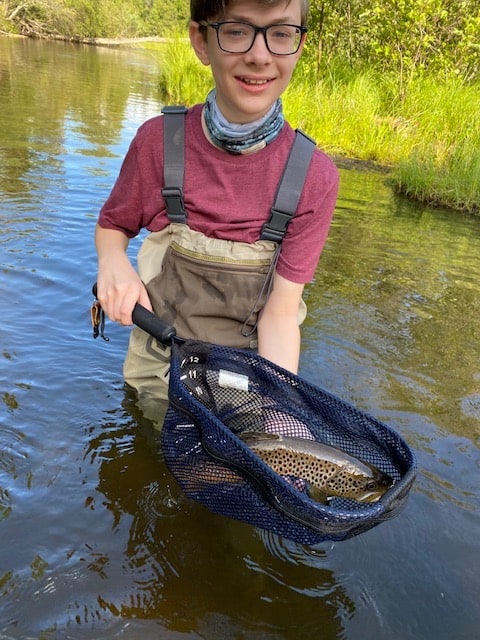 The river has been alive with the cold nights and that’s exciting to all of us.  It was kind of a slow May once the water came up and, as has happened the last few years, the summer fishing has made up for it.  The range of options this time of year is breathtaking and I talk about it often in these reports because it’s the best feature in August.  Whether you love small flies or bass, or white flies below Mio (maybe, kinda, sorta, rumored to have…just started), or night fishing, or pitching small streamers, or hitting a creek…there’s just so much to do. 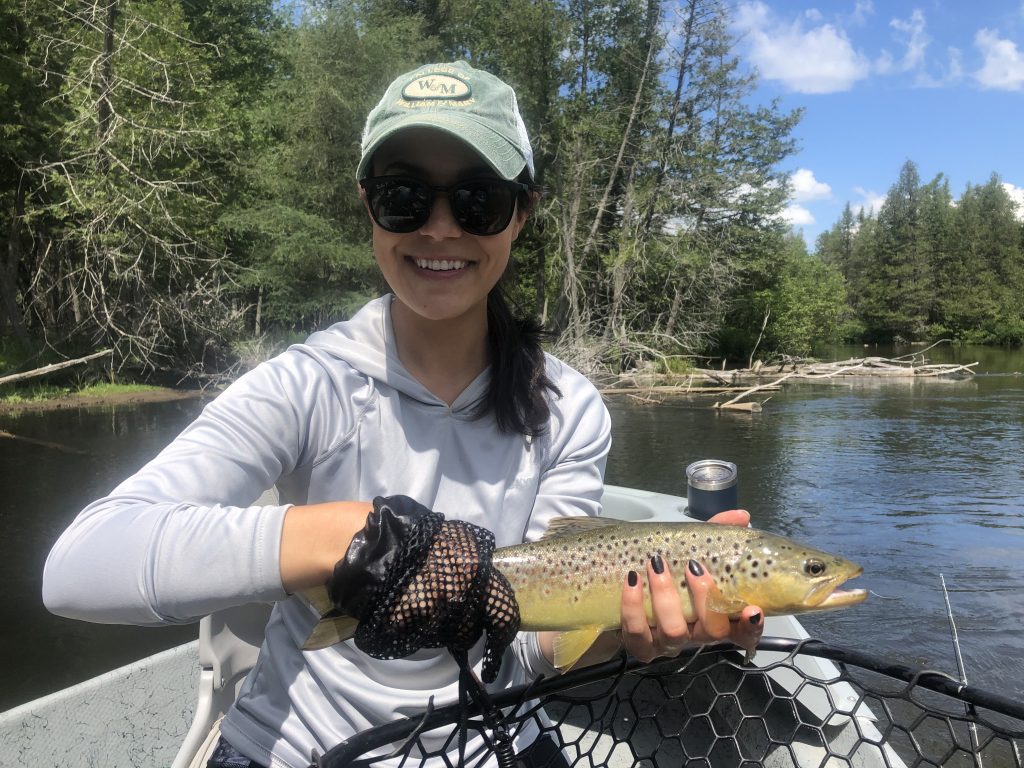 We have open guide dates and openings at the lodge, particularly on the weekdays, from now until October.  The second season is second by calendar only.  There’s so much to do and enjoy and if you’re struggling through a 2020 funk, hitting the river — be it for an afternoon or for a week — will go a long way toward straightening things out.  The forecast is excellent, the nights cool and recharging to the river and to the trout.  We’ve had a great couple weeks on the trout stream…

We are doing river cleanup: upper, lower, and middle rivers.  Sign up and information coming soon but, in short, we will have our usual beats — and several new ones — and will have an online sign up sheet.  Cancel the party, but bring on the labor!  The dumpster and poker sticks will be at the lodge.  The date is 9/12, so please mark your calendar and expect more information this week.  The canoe traffic has been the same as normal, and skipping a year will mean twice as much trash in the river next year.  And that won’t stand…

For all the folks that enjoy the middle river in June (that is, Wakeley through Mio Pond), we need you as we add to our river cleanup list.  We will have the river split up into digestible chunks, and two boats per beat, one working the north bank and one working the south bank.  I hope by next week to have a link to get everyone signed up to help.

Fall season is a’coming.  We have open dates for bird hunters and fall fishers, trout guide trips and connections for steelhead guides.  Put together a fall tour.  Shoot me an email at [email protected] to ask about options…