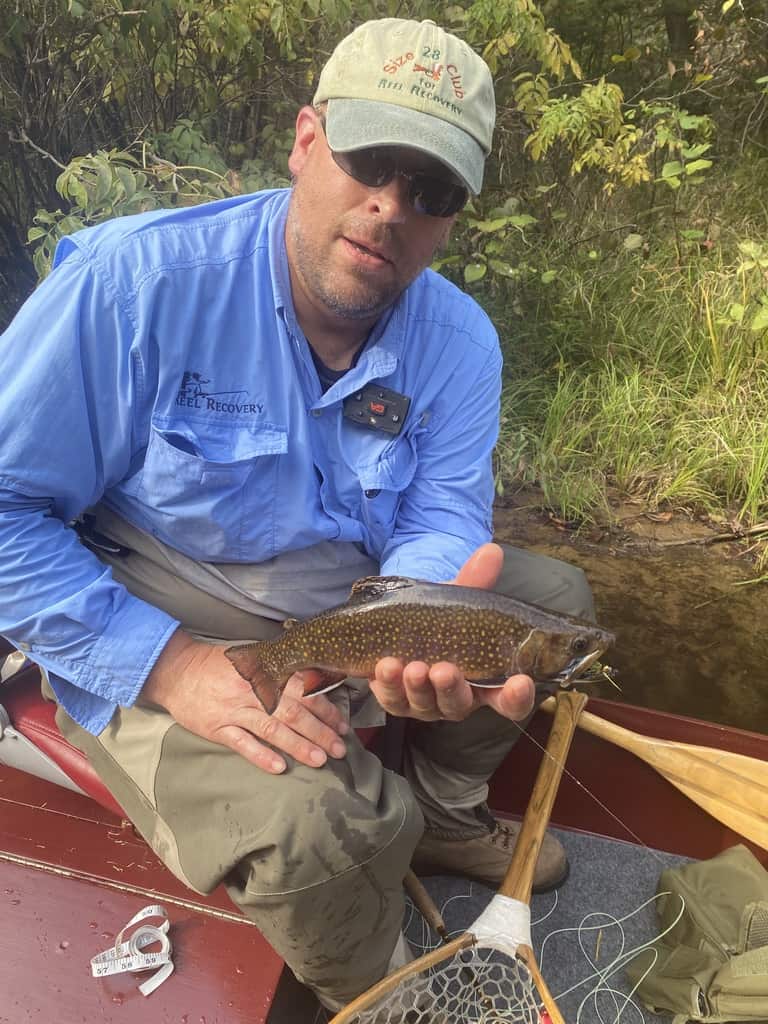 Sleet, rain, sun, and colorful leaves in the wind: what a week.  The conditions have varied rapidly — often changing back and forth and back again — in the time it takes to switch flies.   None of these changes has resulted in particularly good fishing except for a few decent days over last weekend.  It’s been pretty tough.  Full moon?  Barometer?  Maybe.  But folks have managed some trout and the river has been almost devoid of people, canoes, anything. 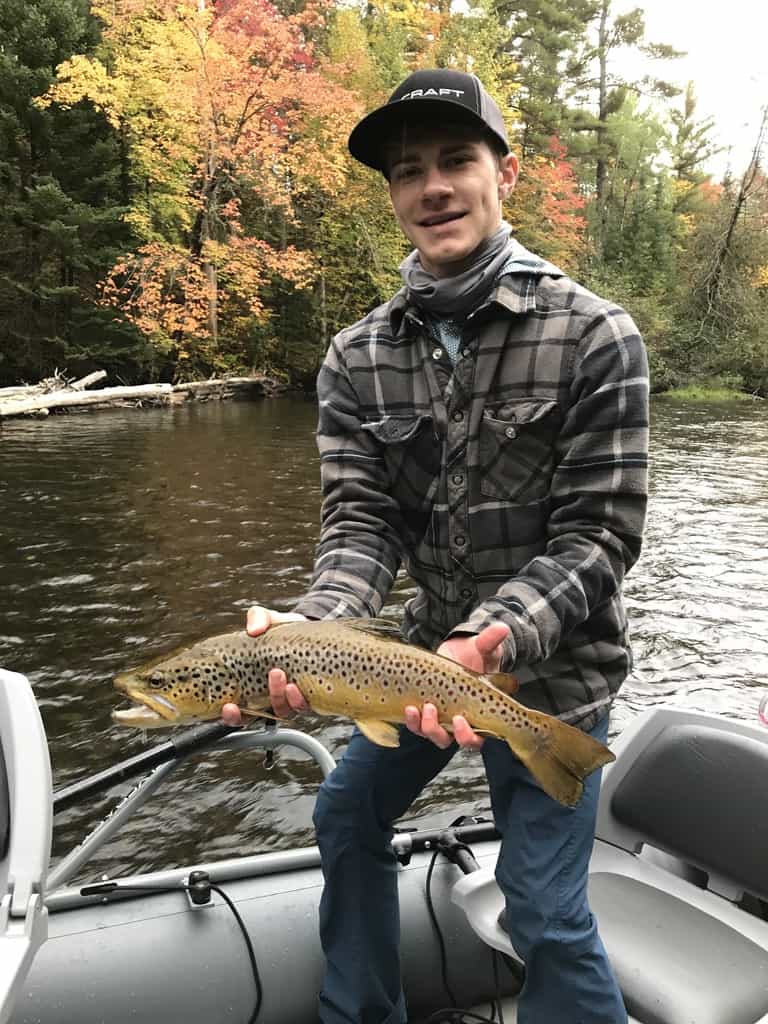 The little blue wing olives have begun to hatch almost every afternoon and they will do so — through rain and eventually snow — right into November.  There are some keys to fishing this hatch.  The first is timing.  The emergence is generally between 2 pm and 4:30 pm and unless you see trout eating them, blind-fishing is futile.  The second key, related to the first, is to be in the water where trout actually will rise to small mayflies.  This means long, shallow flat sections of river.  This is not a big fish hatch, though the relative size of a trout that eats a size 20 and a trout that eats a size 2 is a real debate.  Catching a ten-inch trout on a light rod on light tippet on a fall afternoon feels just about right.  Trust me on this.  A couple of areas to sniff out include the upper half of the Holy Waters, the North Branch (anywhere from Kellogg all the way up to Twin Bridges), and the flat stretches of the Mason Tract.

The activity of smaller bugs means fishing smaller droppers and swinging smaller soft hackles.  A couple of guides have done well on small pheasant tail nymphs.  A sneaky tactic is to pinch on a small split shot just above a soft hackle and fish that rig as a dropper.  At the end of the drift, let it swing up.

Many Michigan rivers are experiencing the much large migrations of salmon, and I know the trout fishing behind the salmon has been pretty good.  The salmon, plus the opening of bow season, means there are even less people fishing…and the Au Sable gets its own migration of big, pre-spawn browns from the larger river downriver.  We just got a bunch of new nymphs in and I’m thinking of a day (today?) of doing a little deep water tight-line fishing to see if any new arrivals are interested.

But what many of us think of this time of year are streamers.  I was thinking of streamers the other afternoon.  I was the only vehicle in the parking lot (an impossibility a month ago) and hiked upstream, content for an hour of good fishing.  Despite the rain, the rivers are still very clear and while hiking the ridge I could see every rock on the bottom of the river and, I thought, the trout could probably see me as well.  One of the unique pleasures of pre-spawn streamer fishing is whipping smallish streamers way up into the shallow, wood-laden sides of the rivers and teasing trout from these unexpected places.  I was doing this on the thin outside of an otherwise deep hole when my streamer simply disappeared as it swam over the drop-off.  My lethargic hookset ultimately proved costly.  A great trout came twisting out of the depths, strikingly large for such a clear day and in such clear water.  I had him for long enough to be heartbroken.  There are not many chances at trout like that while doing after-thought afternoon wades on bright fall days.  That night I just kept thinking how much nicer my day would have been to have held the trout for a moment.

I’ve been getting out into the grouse woods quite often.  This is cast-and-blast season and it sure has been fun breaking in a new hunting partner. 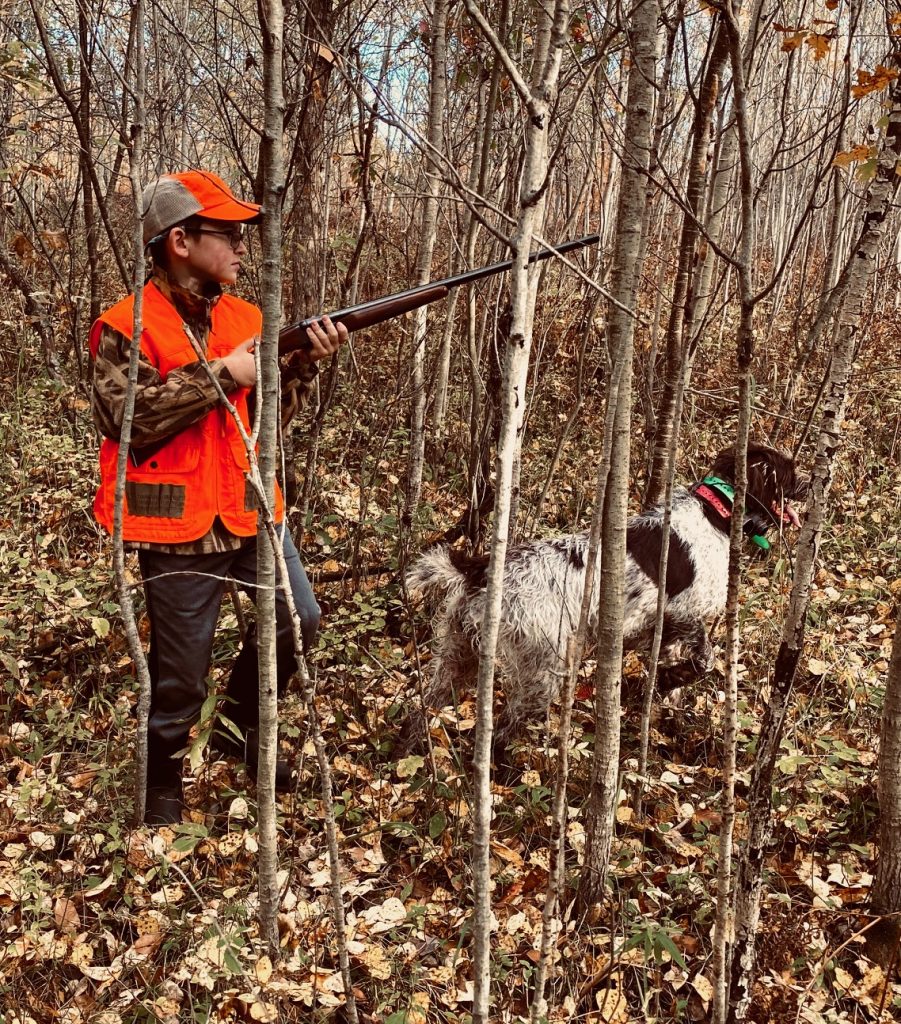 We are planning to be open as is through October 25th, and then partially open through October 31 (we will be serving food for guests-only, and the fly-shop will have reduced hours) before we settle into winter mode.  We still have good openings for that last October week and weekend so give us a call if you want some fine fall fishing and hunting dates.