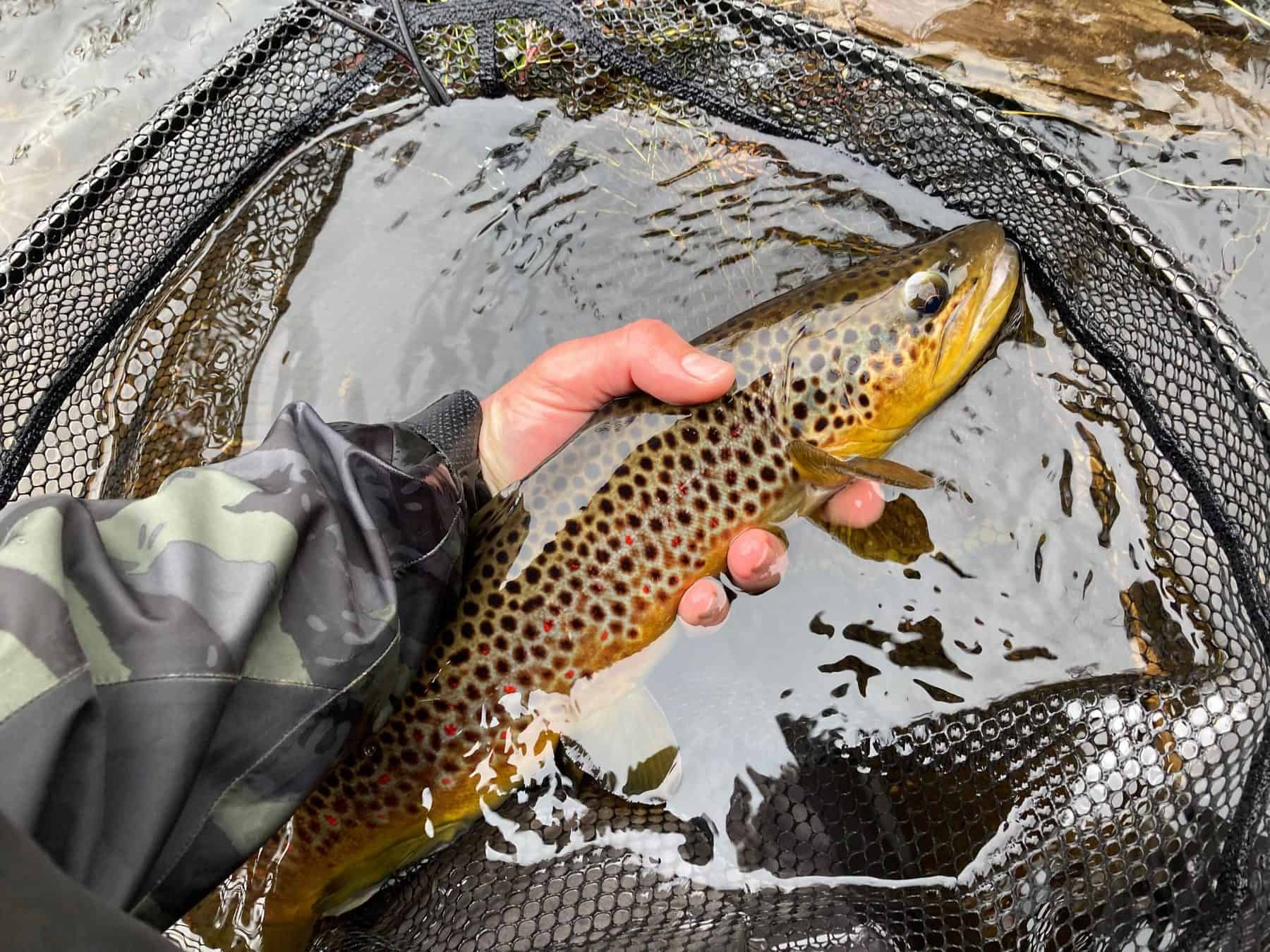 The other day I craved some nymph fishing.  I know it’s not glamorous, or particularly exciting, but sometimes it’s fun to just pick apart a pool with a couple of small nymphs in the fall.  It was the right kind of afternoon anyway: overcast and cold but not windy.   I didn’t have time to really do a streamer wade.  Just an hour or so if I stayed close to home.  So, yes, I already had nymphing on my mind when Lance sent me a couple of trout he’d caught nymphing that morning.  One — pictured below (obviously) — was really big.  So then I really had nymphing on the mind. 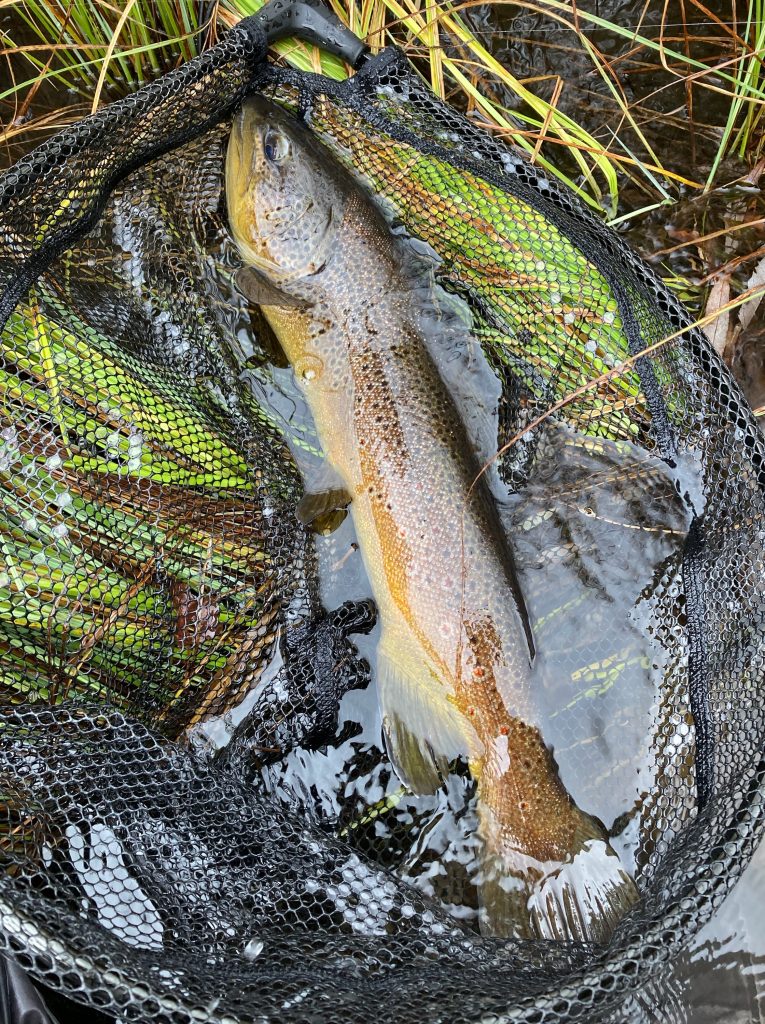 I went to a favorite beat and worked upstream slowly.  The river was cold and there were leaves starting to wrap around the logs and tumble in the flow.   My first fish was a whitefish, the size of a fancy cigar.  And for two bends, that whitefish was my sole catch.  I changed tippet (finer) and flies (smaller).  I hooked and lost a trout.  I pricked another.  At some point the BWOs began hatching.  Well, hatching implies that the mayflies were lifting off the water.  These flies weren’t flying.  They just appeared suddenly, a hazy gray carpet of bugs on the surface of the river.  Thousands of them.

I ignored the sound of a trout rising underneath a tag alder.

I worked up to a sweet mid-river shelf and made a long shallow drift along the leading edge of the shelf.  Bingo.  It was a great brown that leapt three times and took drag and was landed about thirty yards downstream.  Not a trophy, but a trout that would be a good trout on any fly, at any time of day.  The fall had colored it.  It even had white highlights on the bottom of its fins, like a brook trout.  I dropped my phone as I tried to take a picture and lost the trout in catching the phone.  Fair trade, I thought, in a waist-deep river.

After two small trout from a riffle, I couldn’t ignore the mayflies any longer…or the rising fish.  A huge pod was working the soft water behind a mid-stream, perpendicular log.  Just a classic soft spot.  And by huge pod, I mean there was well over a dozen trout rising.  There were enough trout rising that it was pointless to try to pick one and cast.  I had no dry fly box, or floatant, or even a proper dry fly line.  But I fashioned a leader, and I found a  dry fly about 4x too big on my patch, and by holding the 11′ rod up over the trout and sneaking up behind them I could dap a fly down the bubble lines and I even managed to catch a few though, I couldn’t help but think how much nicer it would have been to have a proper 4-weight, a nice dry fly leader, and a box of BWOs.  And some floatant.  I wouldn’t say I got caught off guard.  But I was surprised at my attempt to ignore perfect fall dry fly conditions to drown a nymph.  The seasons sort of encourage novelty.  Nymphing a pool is a novelty in October.  In January, that’s the grim reality.  Come March, I’m looking for black stones, BWOs, a midge, anything…anything other than nymphing!

It’s been off and on on the Au Sable, kind of at the whim of the weather.  Tomorrow, Friday, is supposed to be 73 degrees and I wouldn’t be surprised to see flying ants…they flew on Sunday too.  After that, it looks like a picture-perfect October forecast, with enough heat for hatches (of which, this time of year, there are only a few different sizes of BWOs, and some remnant fall Isonychia and caddis), and enough clouds for trout to chase streamers (black and copper have been excellent), and warm enough water for the smaller trout to be mid-river and susceptible to blind fished dries and/or nymphs.  The trout have definitely started to move toward their spawning grounds but really shouldn’t start hitting gravel for a few weeks.  Most fish are tucked in shallow cover so pitch your flies way up there.  A good day of fall streamer fishing is the best day of streamer fishing you will have.

On Sunday, Matt and I took a walk to the North Branch to check out some of the new trout covers there.  They look great, and we even kicked some nice fish out of the cover as we waded upstream.  This sort of habitat work makes a big difference on our river. 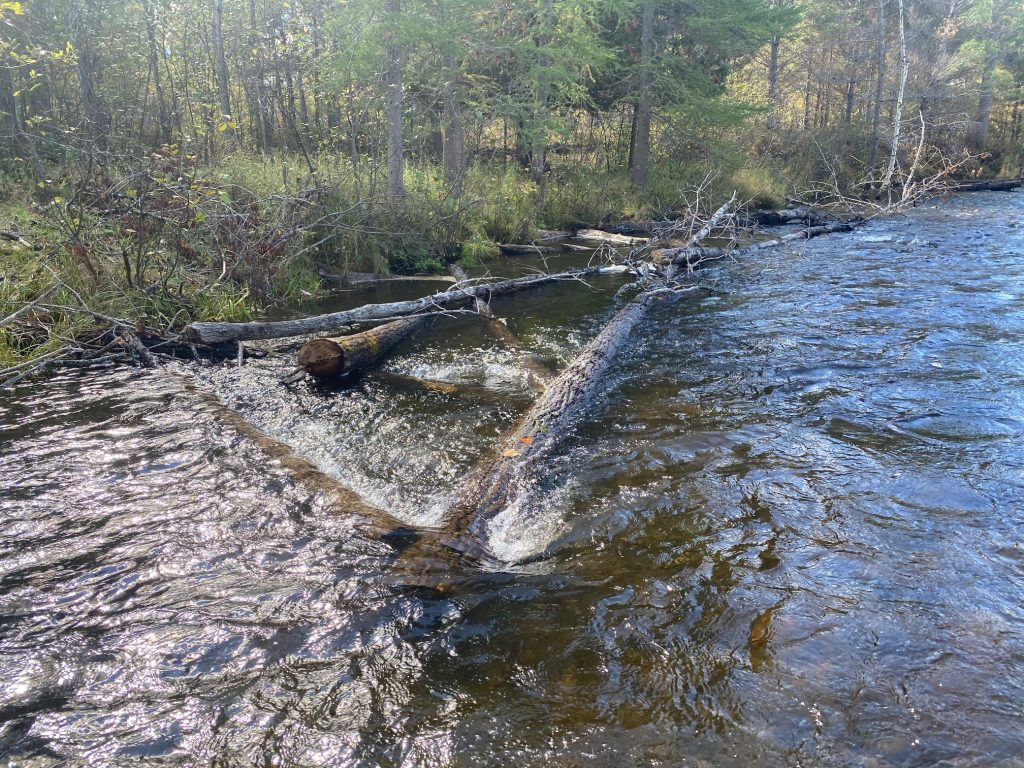 USED RODS!  NEW RODS!  We’ve got some more used rods.  Check them out here.  There are some sweet sticks here, including a new (but old) G. Loomis 8 wt, and even a Bob Summers DELUXE that is in mint/never-fished condition.