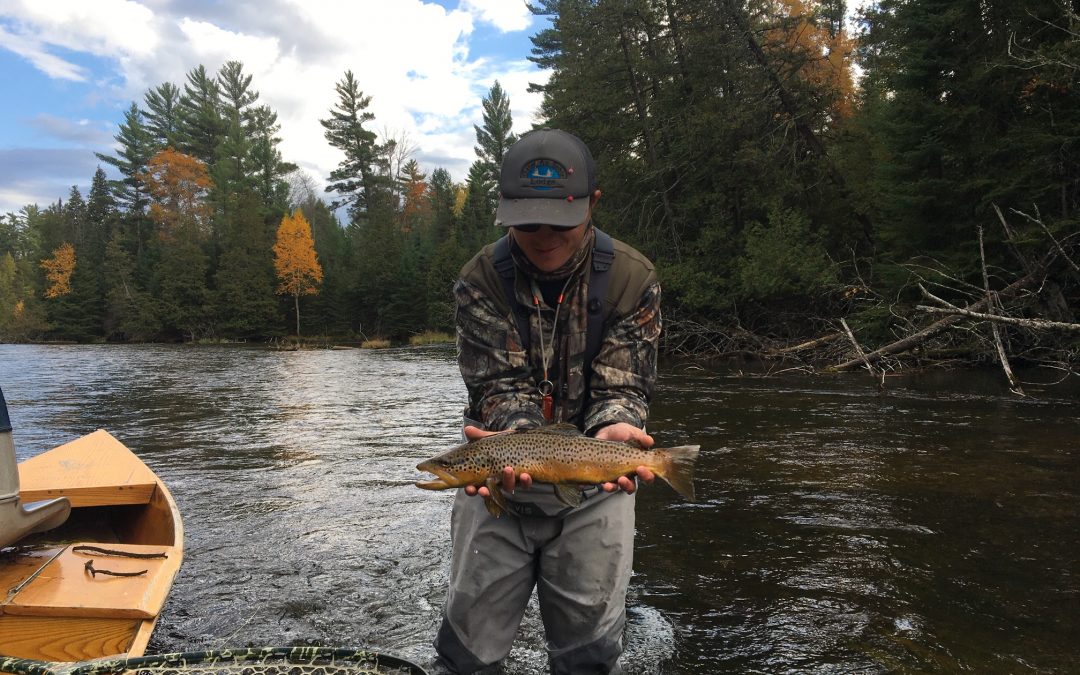 The woods are crowded with hunters, and certain rivers with salmon and steelhead anglers, and that leaves the Au Sable — so busy in the summer — as an unexpected place for some solitude.   It’s rare to see an angler this time of year.  Maybe a boat or two.  Maybe a car at an access.  Like everyone, I enjoy the loneliness of it.  Not just for the silence, but also because there is an innate fishing freedom in having an entire river to fish exactly how you please.  Bring two rods.  Nymph and wait for the fish to rise in a big shallow flat.  Or pick a couple of miles and go streamer fishing.  Lance has been playing around with some tight-line streamers.  It’s a good time to explore the bounds of subsurface fishing.  I saw an angler head off with a trout spey rod yesterday.  It’s a great time of year to do that.  It’ll be you and the river and the trout. 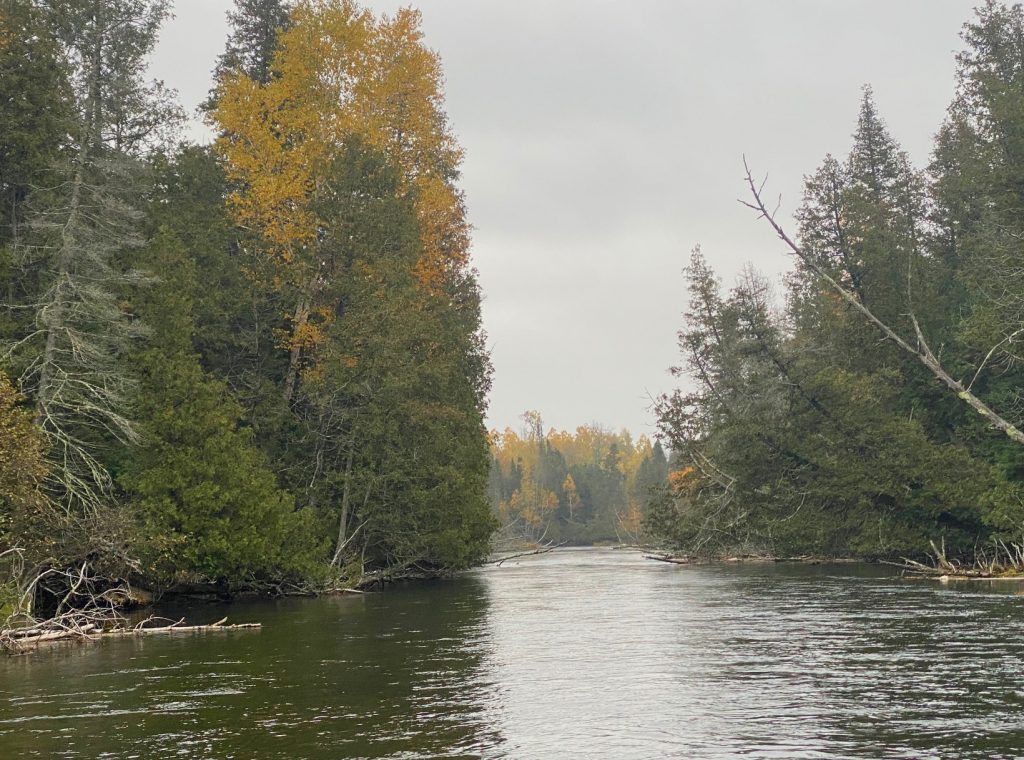 It’s definitely fall up here.  The fall spawners (browns, brooks) are just starting to hop on the gravel.  The rainbows, on the mainstream at least, will feast on the disturbance and intended offspring.  The river is clear and the fall streamer fishing is, at its best, is a visual affair — the primary target being the aggressive pre-spawn male brown trout that are full of color and vigor that shoot from the cover to give dramatic chase.  The other day, a friend and I had to choose between bird hunting and trout fishing.  It was a cloudy and humid day and building toward an afternoon thunderstorm.  Fishing it was.

We switched through some streamers and lines (sinking, floating) until we began fishing black somewhat slowly on a floating line.  Slowly is the wrong word.  A fall streamer isn’t fished, it’s teased.  Or, I guess, it’s used to tease.  For instance, the fly is cast upstream of a log, allowed to sink beneath the log, stripped quickly, paused, allowed to flutter back toward the wood.  Then two fast strips.  Pause.  Mend.  And so on.  If done accurately and correctly (and correct is in the eyes of the trout), and on the right fall day, surprisingly big trout will chase.  Not from every log…but enough that you anticipate one from every log.  So it seemed we were fishing the streamer slowly, if only because we weren’t just casting and ripping it back.  We didn’t “kill it”, but we caught a couple nice adult browns and a handful of smaller fish.  Near the end of the day lightning split the clouds and we rushed off the river.  That night, the moon was over my head but the clouds to the north looked war of the worlds.  An electric fall night. 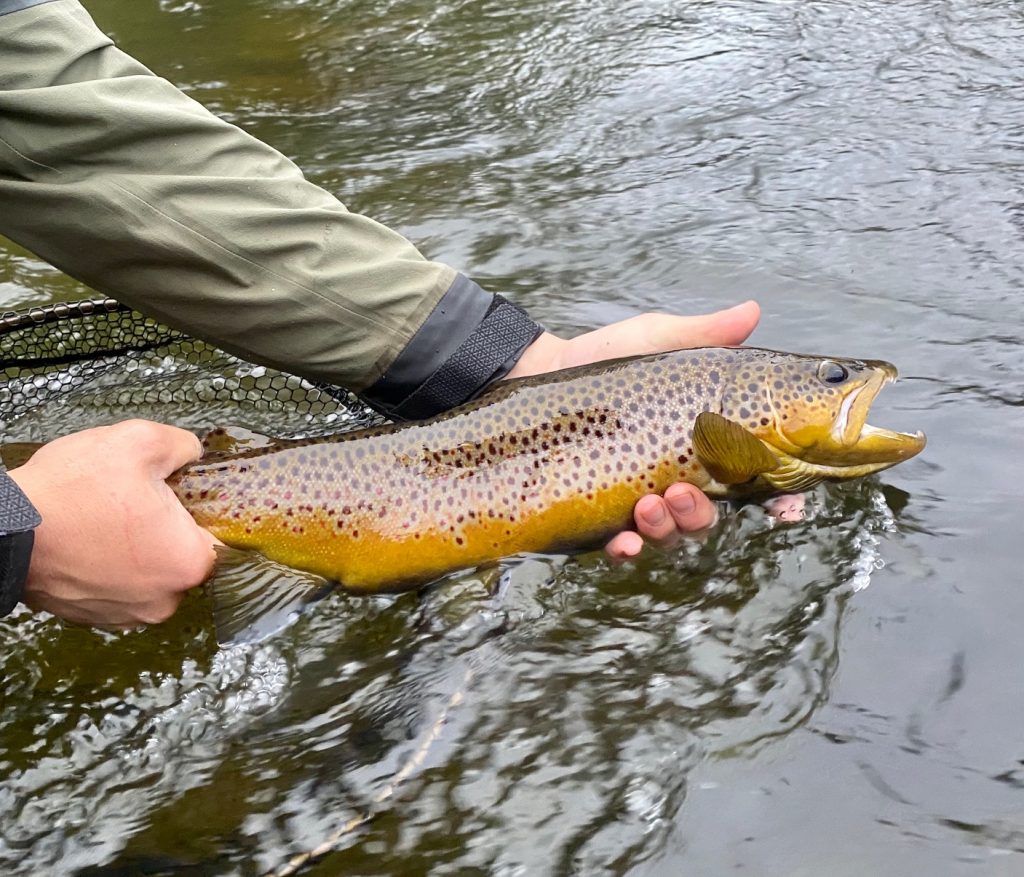 The rivers are in fine October shape.  This week looks cold.  If you are thinking of fishing, don’t let a cold forecast dissuade you.  Way too much is made of water temperature when it comes to streamer fishing.  What matters isn’t what the water temperature is, but how fast it has changed.  Sudden warmups or cool downs are no good.  But I’ve seen trout chase a streamer across a 33 degree river.  I’ve had trout blow-up on streamers — break the surface of the river — in the middle of winter.  If they are used to it, they will eat.  But I will say that during cold snaps it’s best to focus your attention on the afternoons, especially from 2 pm – 5 pm if you want to throw streamers or look for rising fish (we should still have a week or two of BWOs).   Nymphing from 11 am – 2 pm can fill in the gaps and catch some really nice trout without requiring a long wade.

USED RODS!  NEW RODS!  We’ve got some more used rods.  Check them out here.  There are some sweet sticks here, including a new (but old) G. Loomis 8 wt, and even a Bob Summers DELUXE that is in mint/never-fished condition.