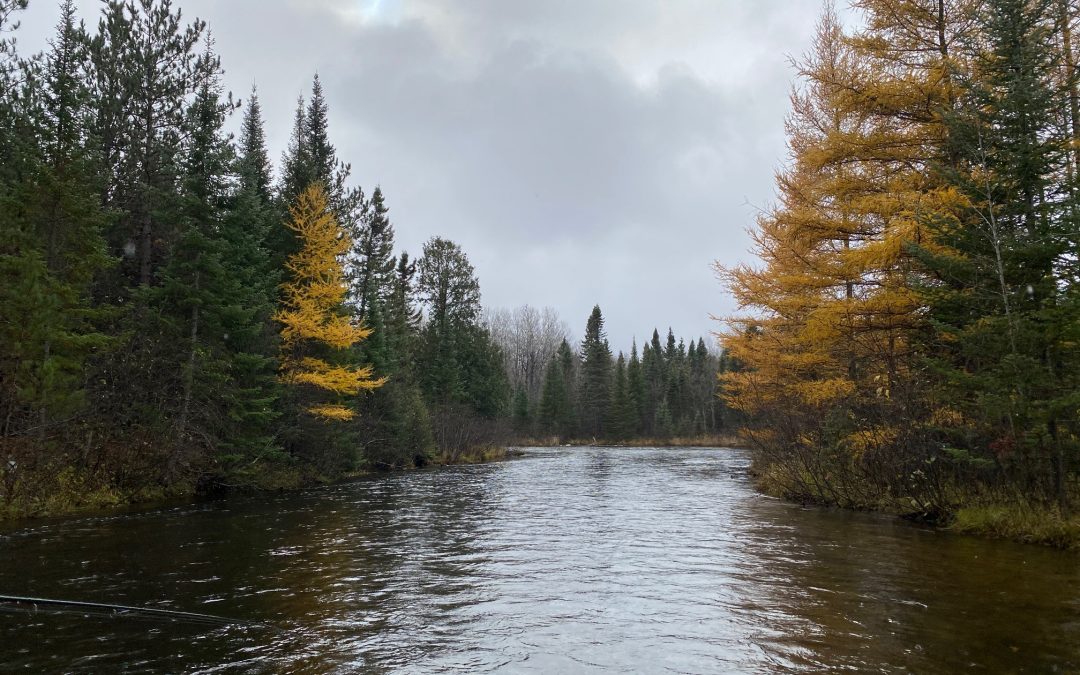 The last tree to change is the tamarack.  It turns golden-yellow before dropping its needles into the river.  Then the river is golden-yellow and that’s when you know that winter is coming (if you didn’t know that already).  The brown trout spawn when the tamaracks are golden.  There are a lot of trout spawning in the river system right now and a fair number that seem to be done spawning.  Fall came early to the river this year. 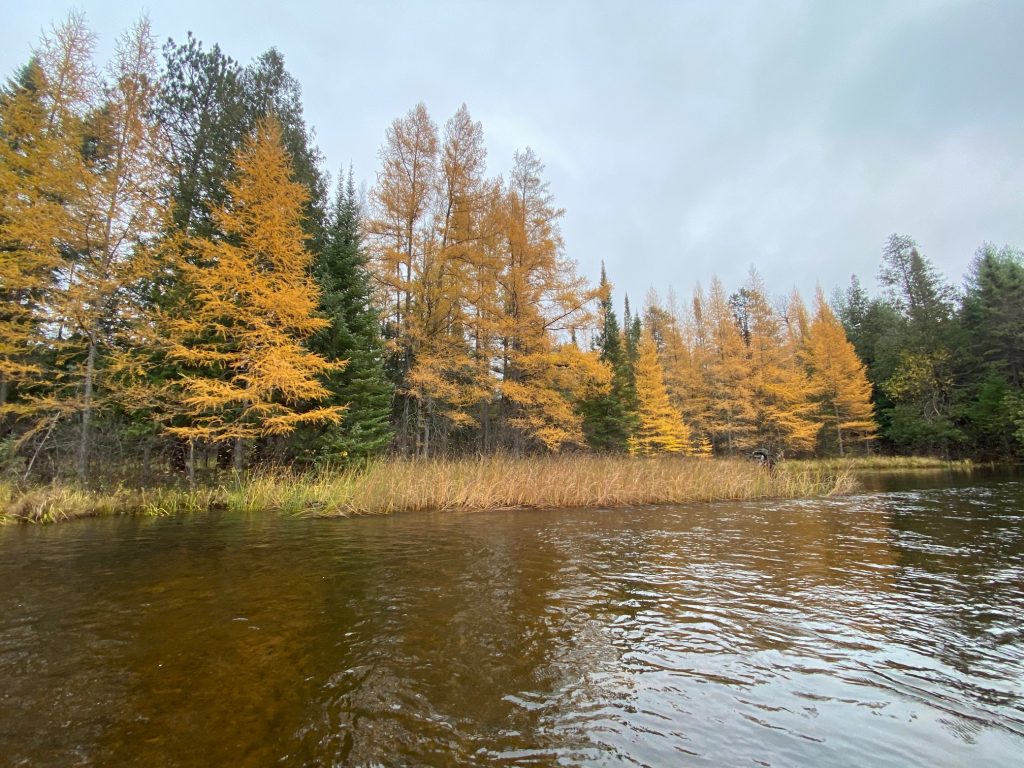 Between end-of-season chores and breaking cars, I made it to the river with my friend Greg for a little streamer fishing on a perfect day.  Perfect, this time of year, is like 40 degrees and cloudy.  Well, it just felt fishy.  I was worried that the fish would all be on gravel but they weren’t.  We found a few shallow, but the majority were in post-spawn stuff:  black water backwaters, soft edges, sandy log cover.  It was a really good day of fishing topped off by this nice trout that ate the streamer on the leap, was hooked in midair, and dogged me through a slow run.  Awesome. 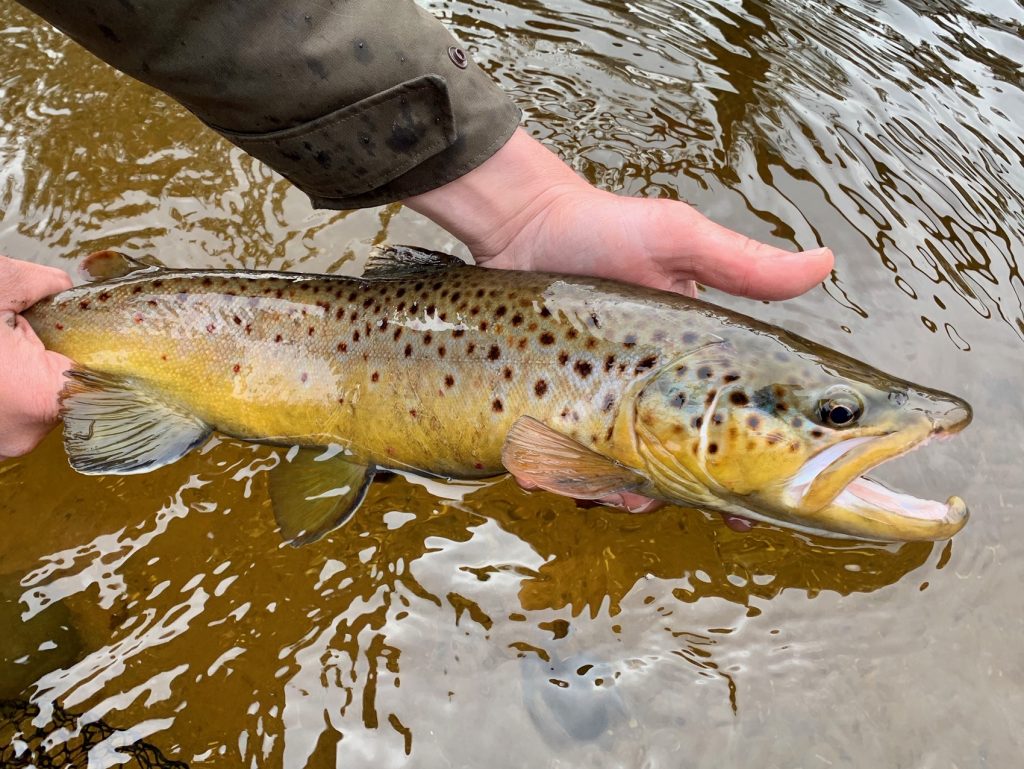 We had a few blue-wing olives and almost enough rises to switch rods.  Almost, but not enough.  We saw schools of brook trout pushing around their spawning beds.  Greg had a pretty huge brook trout nip at a streamer.  We didn’t see anybody except one person at a cabin, talking on the phone.  There’s a big silence in the late fall.  It’s pretty addicting.

I’ve been fishing black or sparkle streamers all fall.  I know these are two different things, and I do think black gets more fish to fully commit, but the sparkle is so fun to fish, so easy to work the fly.  As the fish push off the gravel this week, new ones will arrive, and the spawn will continue well into November.  But, there are plenty of fish in the dark water that are done spawning and back to feeding, often on the eggs of the spawners.  An egg fly may seem sacrilegious, but it is one of the best hatches of November.  Nymph fishing gets really good in November and December.  As does slow swing/stripping streamers.  It’s not fast action.  But it is action.

Returning from a bird hunt the other day I stopped by the river just to take a look.  Upriver the water is high but manageable.  But down below Mio…the river was dark, cold, and full.  An eagle posed on the edge of a dead tree.  It was a nice cap to another great fall day. 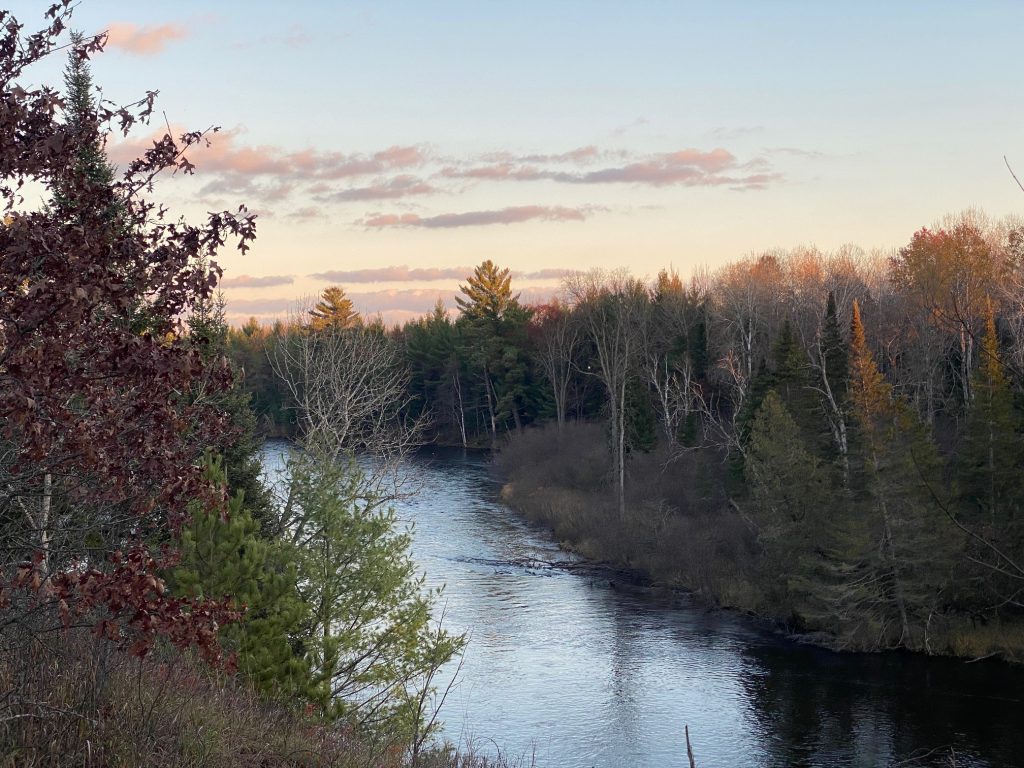 This is our last full weekend at Gates Lodge.  Starting on Sunday, we’ll be open 9 am – 2 pm, 7 days/week, and will have limited lodging for a quiet winter getaway.    The restaurant will be closed until some yet undetermined time in 2021.  It’s been a great fishing season, and while it doesn’t end in the winter, it’s definitely time to start thinking about fly-tying.  We’ve revamped our online fly-tying selection.  Check it out here:  https://www.gatesflyshop.com/fly-tying-2351842/.  Lots more to come…