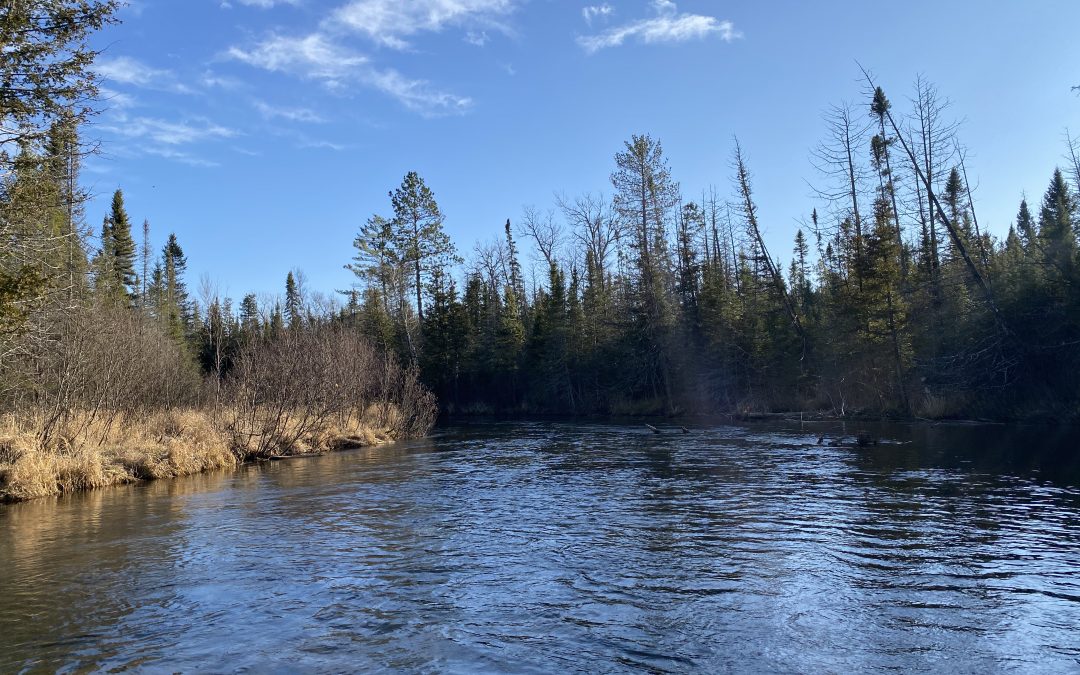 If you received a spring catalog, then you’re already on the list.  If you didn’t, and want to receive one of our two annual catalogs, email your mailing address to [email protected]

Every year, you’re going to catch your last trout of the season.  It might happen in July.  It might happen in January.  You might know it’s the last trout of the season or you might not.  Doug knew this trout was the last trout of his season.  He was wading upstream of the bridge at the lodge, moving the streamer through the bridge-shadow, and wham!   I had just left the fly shop, on the way to the garage, when he yelled for me.  Actually, he didn’t yell for me, but for “a net.  A big net!”  The fish was downstream of the bridge, and Doug was upsteam of the bridge.  If you haven’t waded beneath Stephan Bridge, the bottom is a jumble of previous Stephan Bridges long since collapsed and defunct.  Doug carries one of those little nets.  It was a situation.

I didn’t have my fish car with me, so I stole a big old Fishpond boat net out of the shop, tag and all, and sprinted up the driveway and across the bridge, my youngest son running behind me.  Doug was still upstream of the bridge so I clamored down the downstream slope and perched below the bridge.  “Slowly walk him down,” I said.  Doug said, “yeah, real slow.”  The fish was dog-fighting like they do in November.  It was a spawned-out male, dark with the season, flashing copper in the tannic water.  There was no other way.  I jumped in and netted the fish.  It was a hectic minute.  I don’t know about you, but when it comes to landing a big fish — any big fish, anyone’s big fish — it seems the fate of the world teeters upon successful, if momentary, possession of a single large trout.  At the very least, it would have sucked to lose that fish. 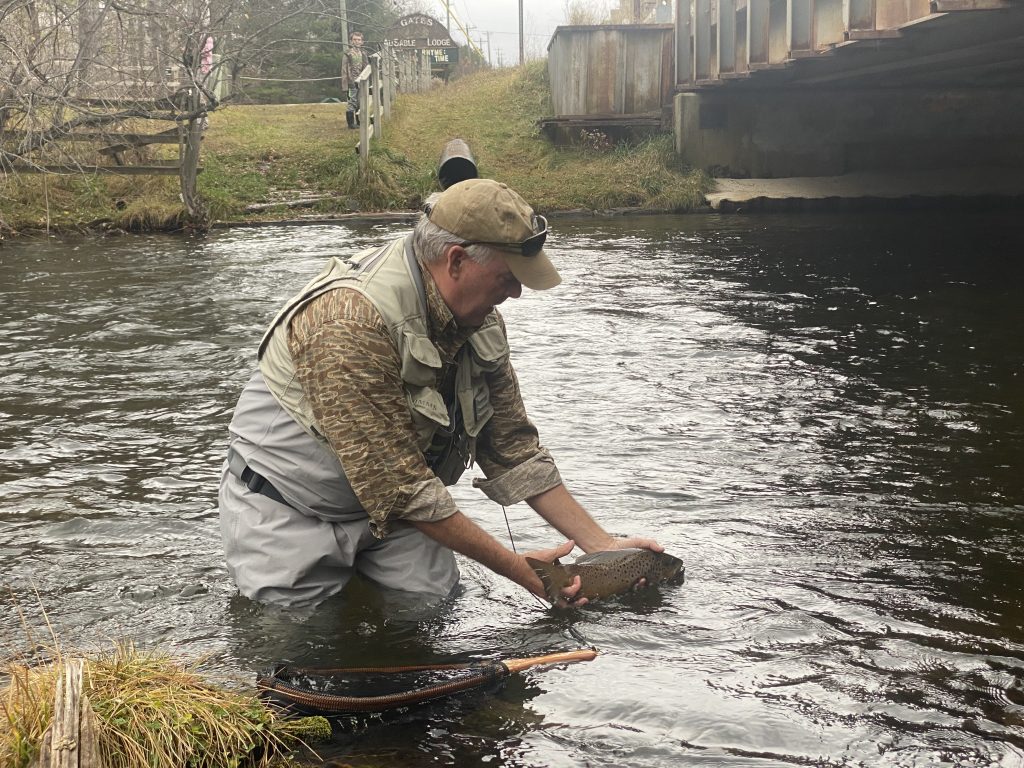 “And that,” Doug said, just after he released this trout, “is the last fish of the season.”

Which brings me to November 14, the day before the opening day of deer season.  Tanker wanted to go trout fishing, and I wanted to go trout fishing.   I had the raft.  He had a few cold beers.  We had about two hours to do a short float.  As I was driving I realized I didn’t have a net.  I called Tanker and asked if he’d passed the shop yet.  He had not.  “Pop in there and grab that Fishpond net behind the counter.  Tell Katy it’s okay.”  Tanker grabbed the net, and to the river we went.

Bluebird sunny days are not very good for streamer fishing, but sometimes, if you find a bunch of post-spawn trout, they aren’t that bad.  The first fish was on a deep, sandy inside bend and it was a dandy.  The second fish was a little smaller, but bright and full of fight. 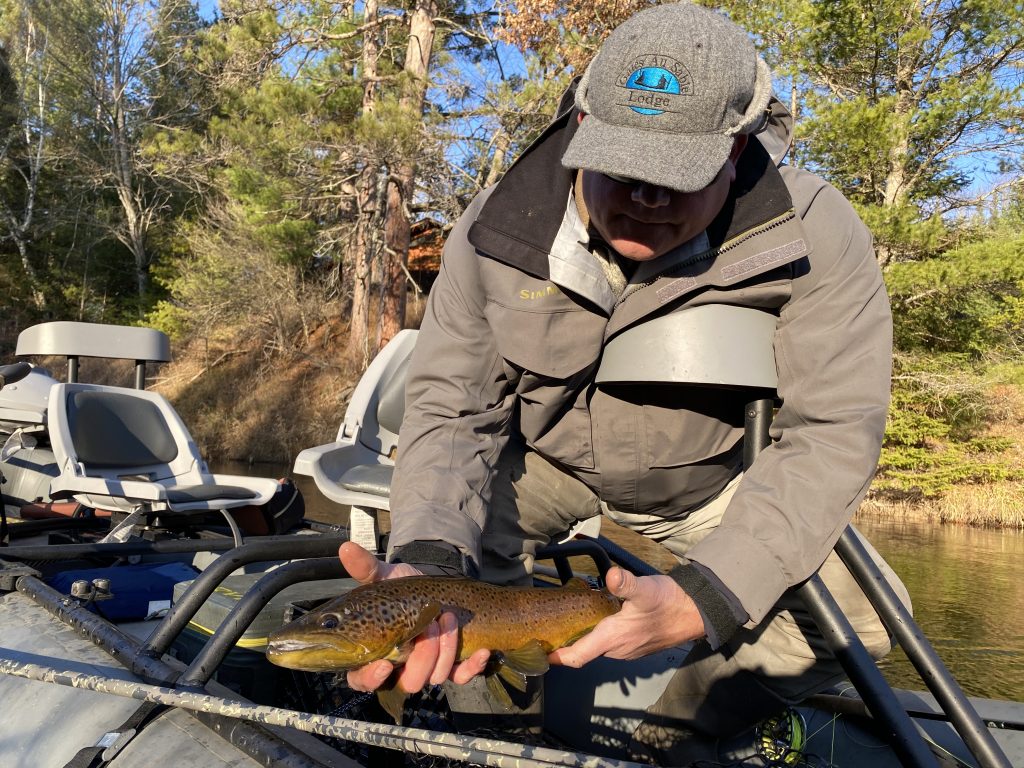 It’s gotta be the net!

In short, it was a really good two hours of streamer fishing.  Four good fish landed.  Four more good fish moved, hooked, or swiped…and a handful of smaller trout not quite ready to commit to such a big fly.

So the net is used, but the fish karma is strong.  It’s the Fishpond Nomad Boat Net, riverbed camo, fish measuring marks up the handle.  Retail for $239.  Lucky fish net price is $175.  Email me at [email protected] if you want it. 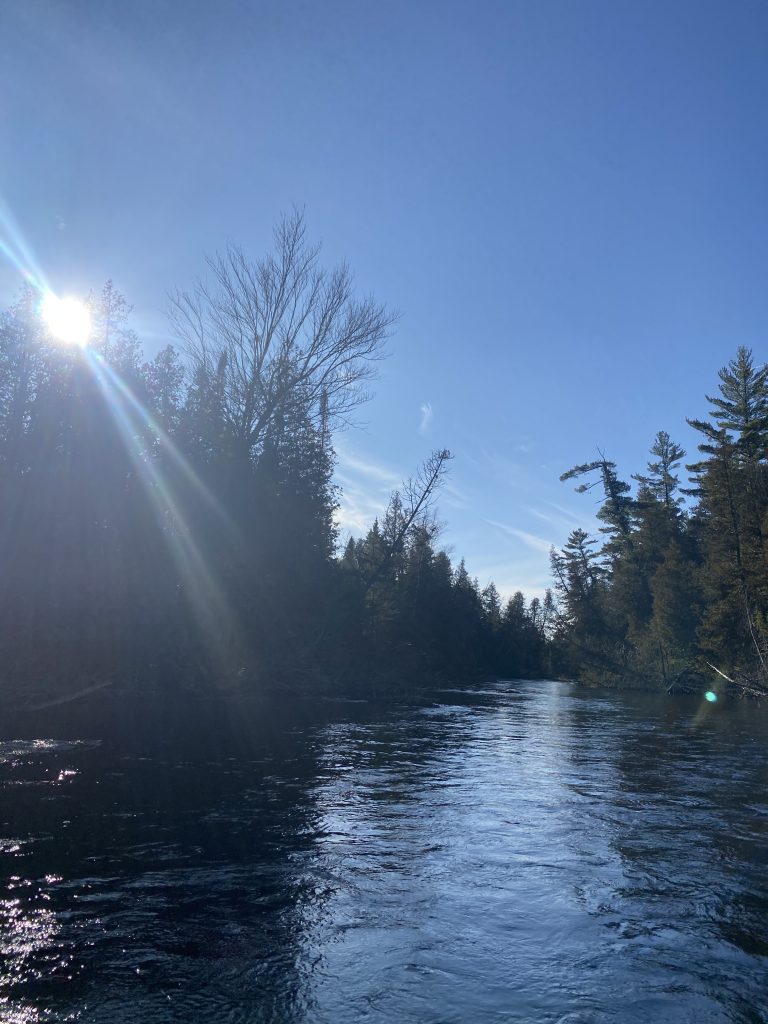 Can you see the eagle?

The fishing conditions are just about what they always are in mid-November.  Underrated, but also uncertain.  The trout are more or less done spawning, though you’ll see brown trout working gravel up to and into December.  This means that most fish are post-spawn, sitting in slow or deep water, and hungry.  A brown trout in November does not fight like a brown trout in September.  When I streamer fish this time of year, I move the fly as if I’m teasing a very tired cat.  Strip, pause, strip strip, pause.  I let the fly hang at the end of the retrieve.  If I see a fish in pursuit, I stop stripping.  A post-spawn trout will eat a fly that stops moving…something a pre-spawn trout almost never does.  Black has been the color.  Copper has been good.  If you’re in big water try chartreuse/white.

Nymph fishing has and will be effective through the late morning and early afternoon.  Mix up your nymph sizes and keep adjusting and fiddling with depth and speed, especially if you’re indicator fishing.

The best color to wear is orange.  It’s rifle season in Michigan.  And please keep in mind that after rifle season closes the first of December, it’s followed shortly after by muzzleloader season, which this year is open to all firearms, and then there’s two weeks of private land doe firearm season.  So, orange hat and should be good.

This fly does triple duty.  It’s hatch buster in the evening when you can’t get them to take a hendrickson spinner.  It’s a nice high floating lead fly to carry a small nymph or caddis emerger.  And it’s a great on-it’s-own searching pattern.  Dust the wings and gel the parachute.  At it’s best during the black caddis hatches of May.

I know bird hunters hate the adults, but baby porcupines are as soft as stuffed animals and twice as cute.  A little roadside attraction we found on the Mason Tract. 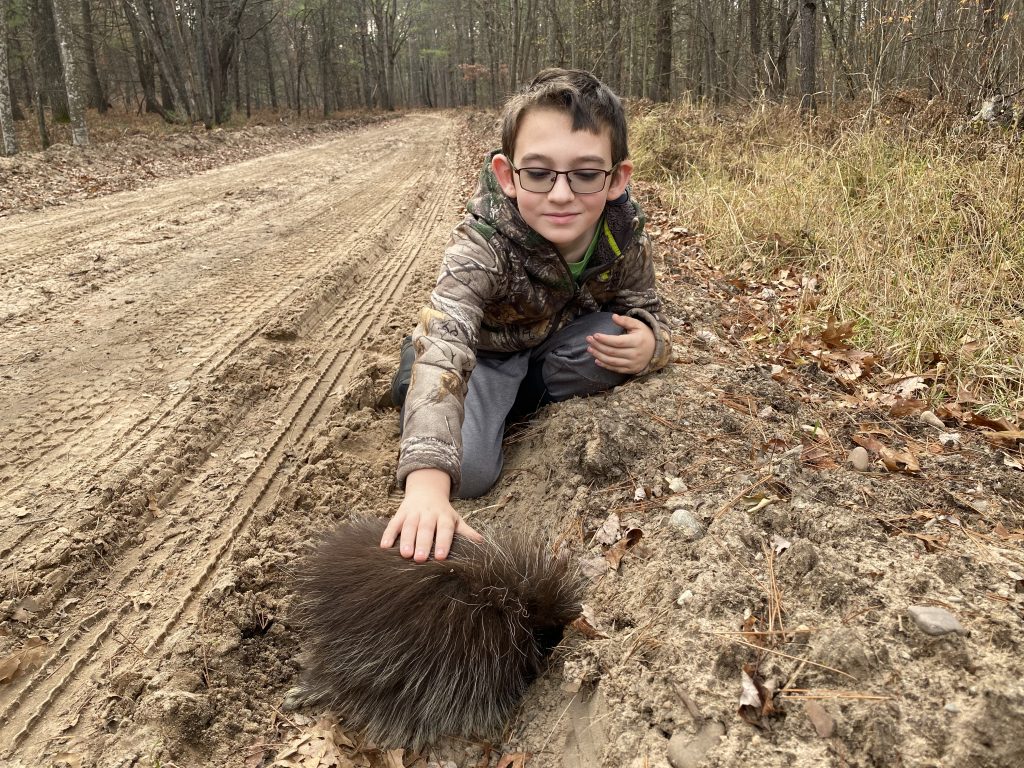 Updated Used Rod List:  We’ve got some dandies in stock right now.  Click here to check them out.