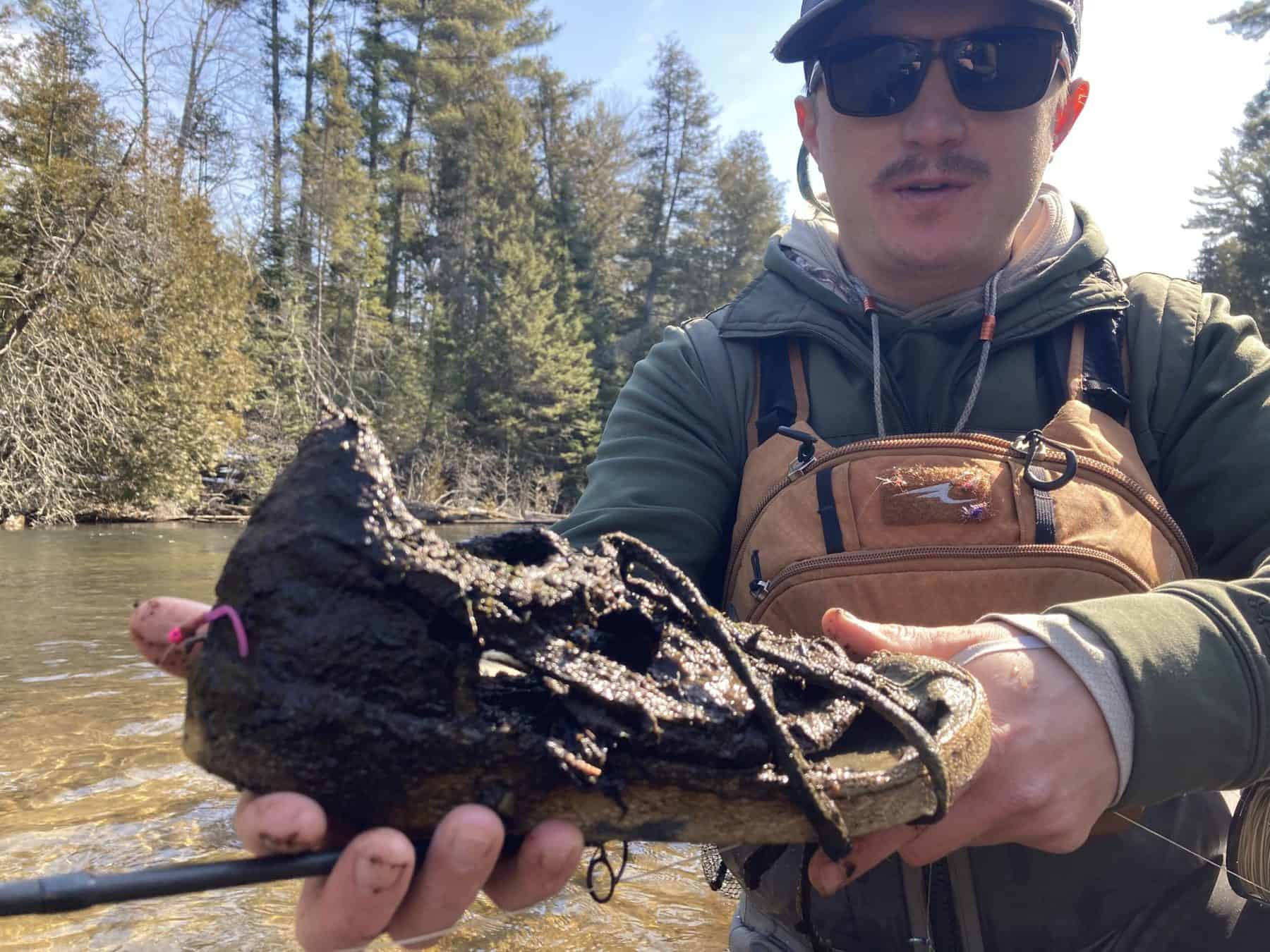 It’s the weekend of the fly-fishing show, which means it’s been a year since sh$# got real, as they say.  No fly fishing show this year, which, if I’m perfectly honest, meant I could fish a bit this week.  Which was good…because it was nice out!  Nice enough, in fact, to entice some folks out to the river both on their own or with guides.  Some really great trout were caught.  Here’s a sweet hook-jawed male.  The trout are in great shape this spring. 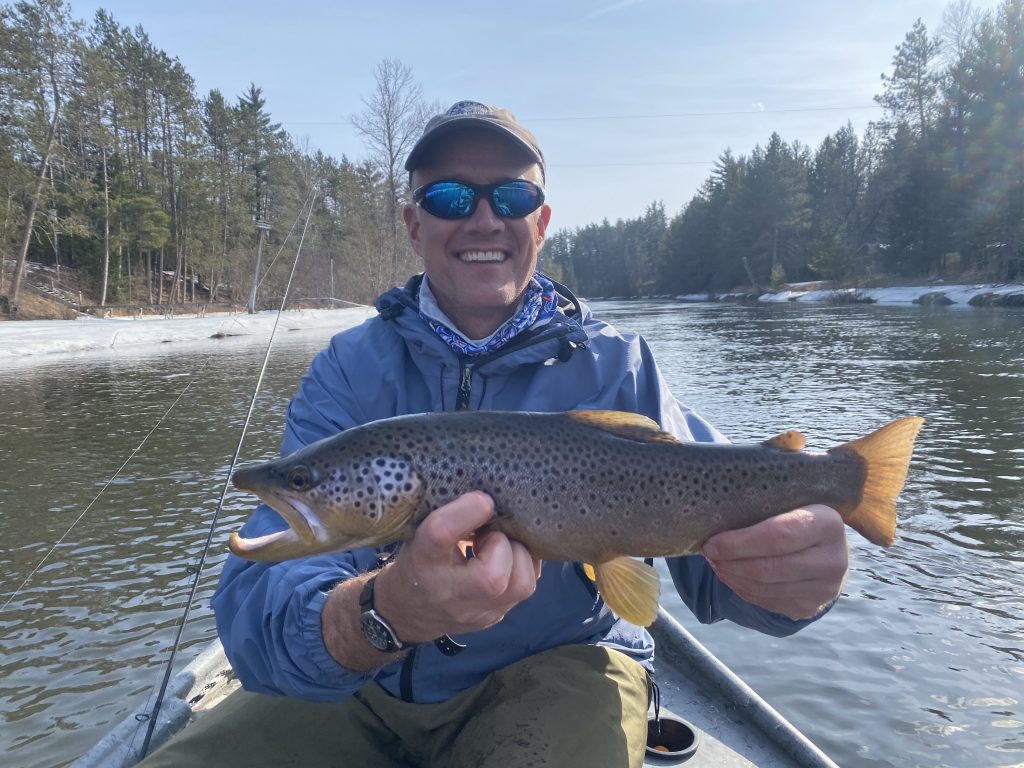 We caught some weird stuff too.  Jordan caught the headlining shoe.  And Denny caught either a pepper or salt grinder.  I can’t remember.

Today I floated with my friend Greg, who is helping me navigate a perplexing email-server issue.  We did a long float to clear our heads.  We’d counted on some cloudy day fireworks.  Not today, it seemed.  After a long, particularly dead stretch of river, we’d resigned to joking about how bad the fishing was.  We couldn’t get a fish to chase.  And then, on a cast to the right bank — the same sort of cast we’d by then thrown a hundred of — not one but two trout — two big trout — came chasing after his streamer simultaneously.  They swarmed, sort of ran into each other, veered off, milled around, and then spooked.  It seemed suspiciously choreographed by the trout gods.  Keep the faith.   After that good omen, we managed a few nice trout, and I lost the biggest fish I’ve hooked all winter.  No!

The river did come up today in most sections and with rain in the overnight forecast — and “heat” — I still think we’re heading into the early stages of spring run-off.  Barring a rain event, this does not look nearly as bad as the last few years, as there isn’t a bunch of snow left and even less of the big frozen swamp ice chunks.  Still, I do think the rivers will continue to rise over the next week.  We do try to stay up to date on what is happening on all three branches of the Au Sable as well as the Manistee so give us a call or shoot me an email (now that my email is fixed) for current conditions and river report. 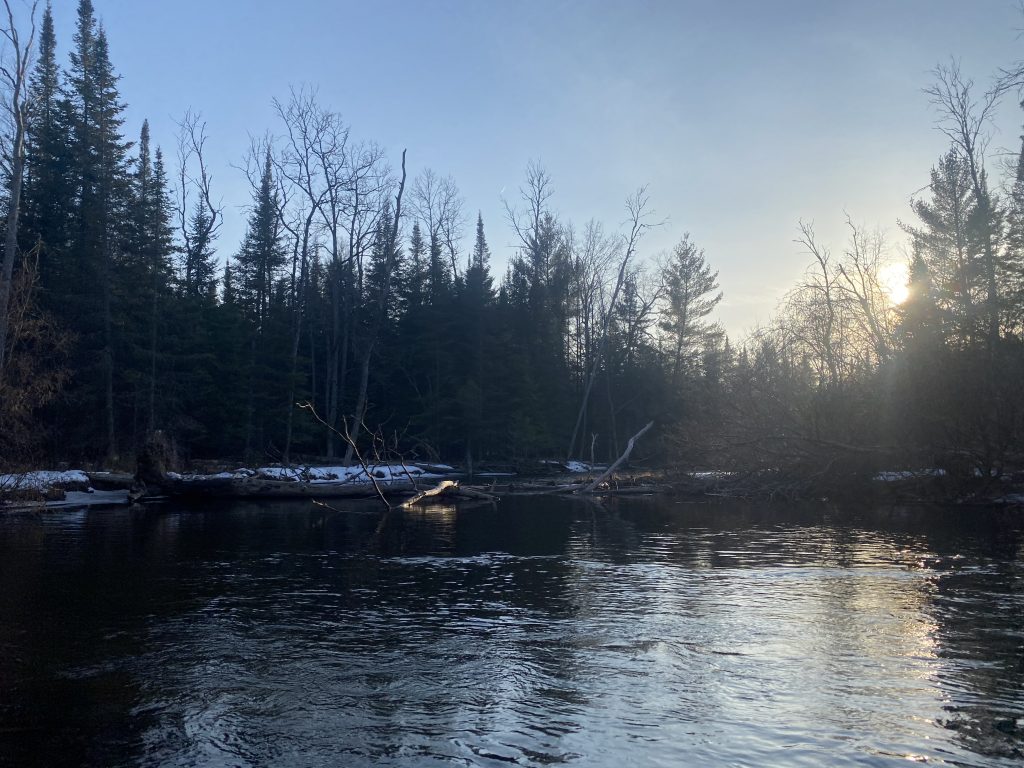 Depending on the water clarity, we’re relying on the entire streamer gamut, big and small, light and dark.  Stay versatile — it’s a fun time of year to streamer fish.  For nymphs, I’ve caught most of my fish on size 12-16 flies.  Chartreuse hot spots seem to be the ticket right now.  For dries…

…So my oldest has had a hankering to catch a pike on a fly.  Last week he tied up some pike flies, and this week I took him on the river looking for pike.  No trouty spots were cast at!  A slow and steady trickle of hatching black stones had me daydreaming of actual hatches.  Anyway, we hunted backwaters, wearing his arm out, until we stopped to give his hand a break.  As we sat there anchored, I put my head down for a second, and heard a “gloop.”

Of course I looked up at the rings spreading, interrupting a perfect mid-river seam.

I watched the rings just sort of fade into the river.

Near the end he did hook a pike — a pretty nice one — which came unhooked.  Oh, he was so bummed.  I told him he should be happy to see the rise and to hook the pike.  I don’t think he was then but I think he is now.

Spring Catalog is in the works…

Don’t get our catalog?  Want it?  Send your mailing address to [email protected]…. Every spring we publish a Gear Guide to fill you in on new stuff in fly-fishing from all sorts of manufacturers.  This year, we have a few funny asides, custom-written descriptions, a modern hatch guide, a new river map from artist Jeff Kennedy, and probably a couple dozen typos.  Well, we try! 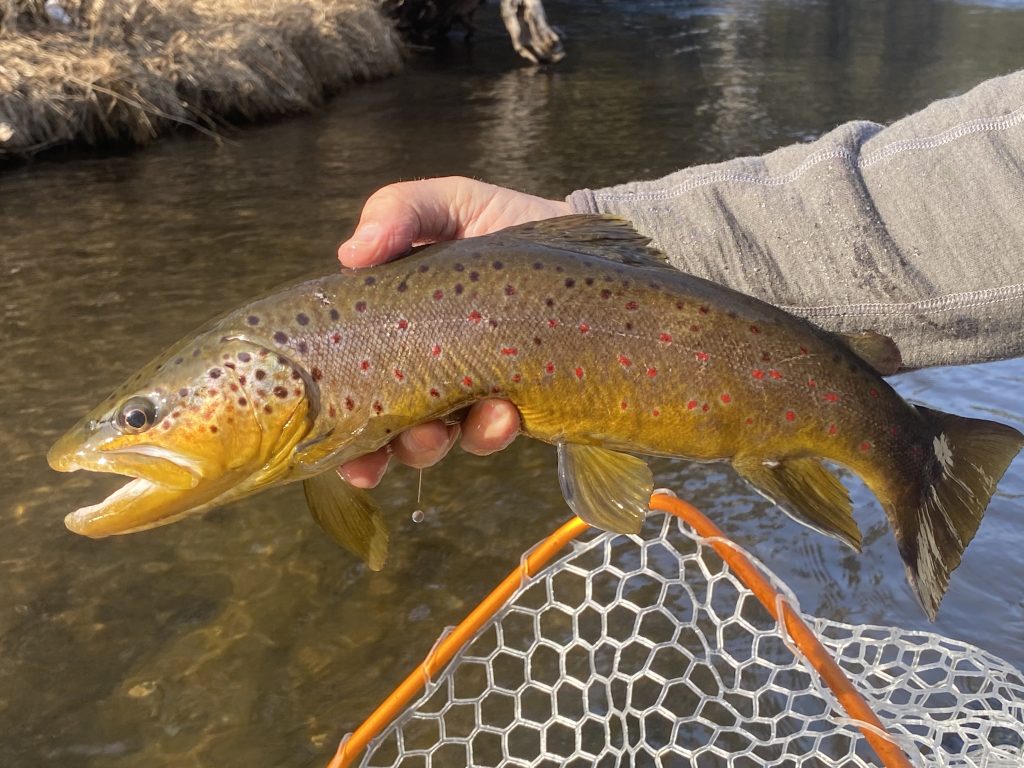