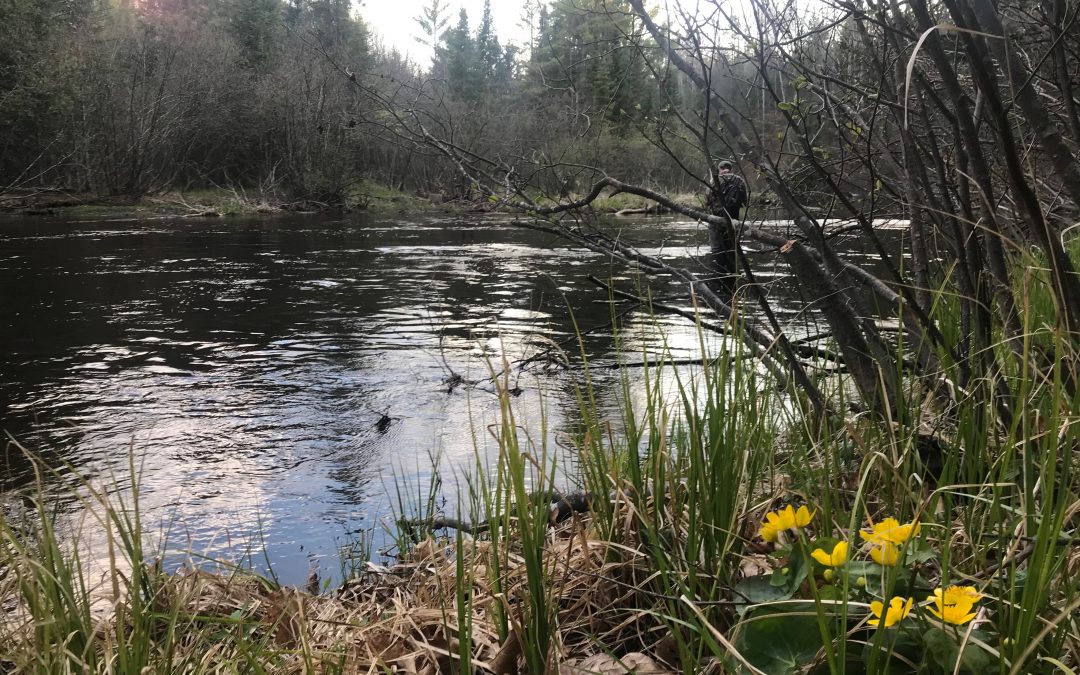 I forgot my bug spray this evening.  The bugs haven’t been that bad in 2021.  Tonight — as dank and humid as any night so far this summer — the bugs were atrocious.  They tore into me.  It was terrible.  I contemplated spreading muck on me (maybe) or even fly floatant (bad idea, I figured) and then the fish started rising and so I just fished through it.  The bugs didn’t withdraw enough blood to leave me unconscious, or dim a very good evening of rising trout. 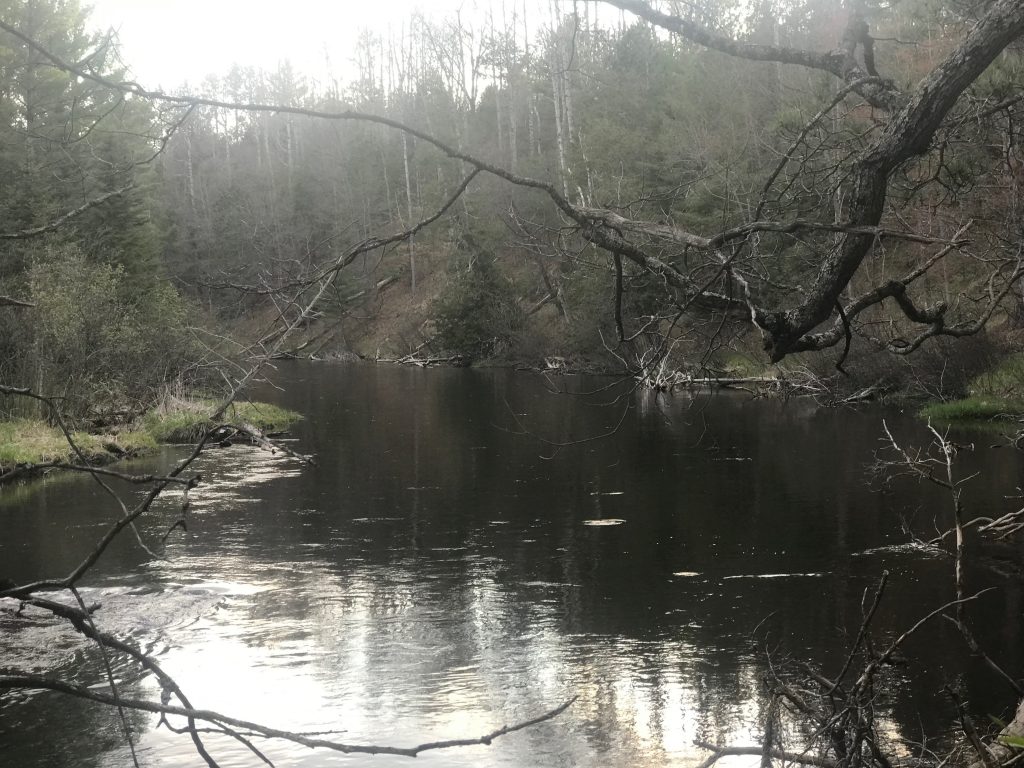 It wasn’t very good over the weekend.  It was better on Sunday.  It was actually pretty good tonight.  Just before dark, the brown bugs fell and the sulphurs began rising.  I found a decent fish in a seam across the river and I caught it on a Sheets Red Quill, size 16.  It was every bit of a twelve-inch brook trout.  That, to me, is more than enough to make the night.  I released it, and looked up just in time to see another trout rise in the same seam.  I shrugged, made the exact same cast I’d just deployed, and caught that trout.  Ten-inch brown.  Okay.  I released that one, dusted the fly, and saw that there were two more trout in the same seam…and managed to catch both of them, both good fish!   Giggling, I dusted the fly and…yep!  Another rise.  I caught that one.  They weren’t big trout, but they weren’t tiddlers either.  I started to head upstream to see if I could find a bigger trout, when I heard a slurp in the exact same seam and saw that there were now two more fish rising.  My goodness.  I caught the back one — another big brook trout — which was summarily replaced by another fish…so once again there were two fish rising in the seam.  Perhaps, I thought, there was a bit of magic in this run.

And then my phone rang.  My youngest had a hook stuck in his foot, and the hook eye was stuck in the carpet, thus lashing him to the floor.  Could I please come home and perform the necessaries?

I could.  And I did (scissor the fly from the carpet, position very angry child on his back, foot braced between adult knees, loop stout monofilament around hook bend, push on hook eye, and pull…alleviating the pain but flinging the same hook deep into the recesses of yet another carpeted room, where a future night of fishing will undoubtedly be interrupted).  But I’ll be back to that revolving trout door again soon.  It was sweet.  And the bug bites are receding.

My report this week is that the fishing has been a mixed bag.  And that is what I love about this time of year.  But it’s also what can make the fishing seems slow.  Matt had good streamer fishing today.  Brian had good nymphing using a soft hackle as a dropper.  Patti caught a dandy brook trout in the middle of the day.  It’s a diverse, difficult, and splendid week.  But it can be maddening.  And, at times, just flat-out unfair.  So many different bugs, and — especially the past few days — not enough of any one bug to really turn on the fishing.  It’s sort of the antithesis of what’s to come, when the big bugs of June (or earlier) arrive, and steal the show from the small bugs of May. 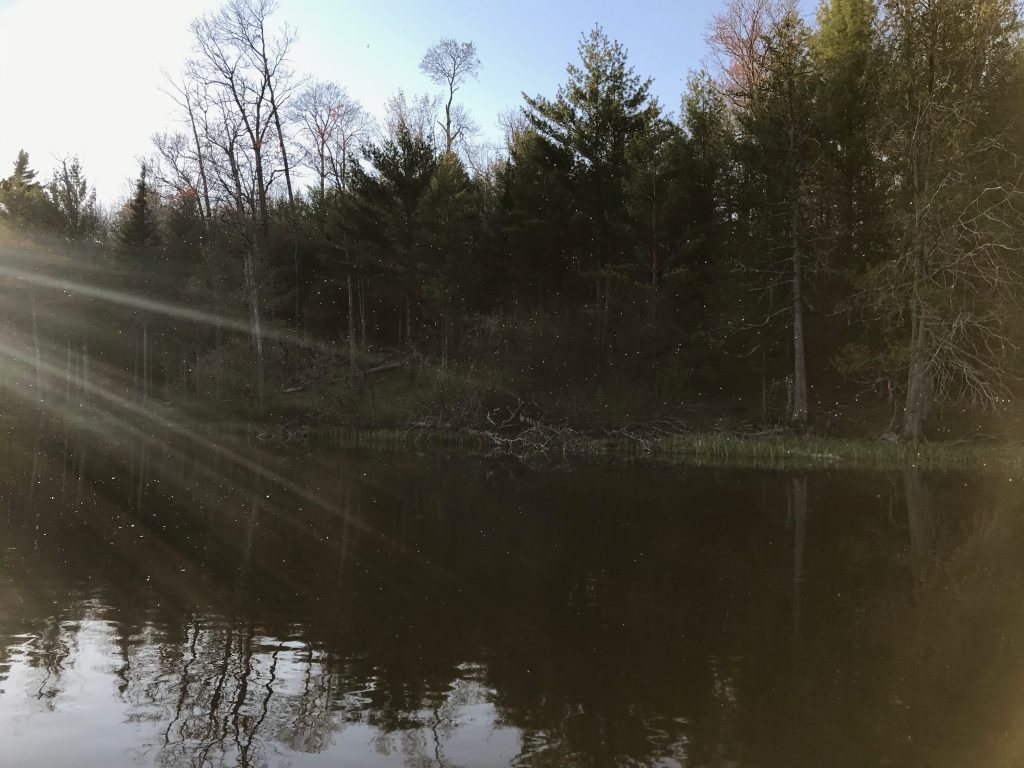 The rivers are once again low and clear, and my best advice is to use low water tactics to fish the river.  The trout will often rise in the middle of the river if you let them (meaning, move slowly and carefully, or sit on the bank and wait) and they will react negatively to loud wading and lots of casting.

One of several dandy brook trout pics I received this week

The size 18 sulphurs have begun, and tonight the first few March Browns were trickling off…which means the brown drakes aren’t far behind.  These bugs are mixing in with the first yellow stones of the year, along with clouds of caddis, the size 16 sulphurs, the Borchers Drakes, and the mahoganies.  The forecast is solid, and I think — I hope — that the fishing will become a bit more consistent over the next week.

Got stuff you don’t need…Mason Griffith TU would love to have it!

Looking for any hunting and fishing equipment that can be used to raise money at a future “garage” sale.   Includes everything but guns (though if you want to give away any side-by-side shotguns, I’m interested!).   This will be a great and fun couple of days.  Questions can be emailed to:  :  [email protected]