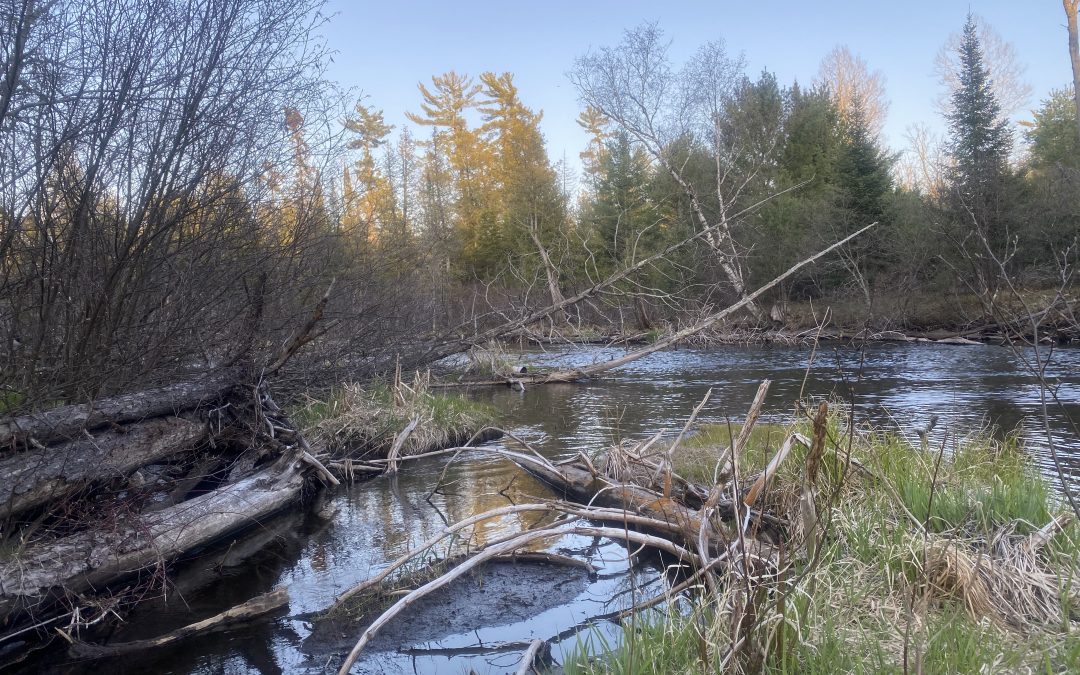 In popular culture, up a creek is a bad thing.  To the angler, it’s a good thing.  In fact, the further up a creek you are, the better.  I got pretty far up one today.  To be honest, the last few days have been pretty uninspiring.  Both the Au Sable and Manistee are pretty high and stained.  Wadeable, but swollen.  All three should clear first, and drop soon after.  But, like I said, the last few days were uninspiring.  And then, when I had a free two hours this afternoon, I remembered that it was open trout season, that I could fish anywhere in the county for trout, and maybe I should go fish somewhere I’d never fished before.  And so I did.

As creeks go, the one I chose isn’t as friendly as some of its neighbors.  Rather than producing lots of small fish, it coughs up just a few great big ones.  The sun broke free before I got to the water, so I didn’t have high hopes for fish catching, but I had a good feeling that I’d find something cool.   At a certain point, exploring new water becomes a guaranteed victory.  I fished a streamer upstream.  The creek is a slow, tag alder meander, deep in the bends, shallow and sandy in the straights.  It’s a beauty.  My plan was to make long casts upstream, mend toward the bank so the fly swam somewhat perpendicular to the current, and hope to get a big fish to eat.  For a half-hour, I didn’t see a fish.  And then, casting past yet another clump of tag alders, I found myself fastened to a VERY big trout…only to lose it as soon as I saw how big it was.

I spied not one but two green herons.

I fished for another hour.  I saw exactly one more trout.  It spooked from an undercut bank near the spot I planned to get out.  It was enormous.  It was the size of the trout behind the fish hatchery.  Near that same spot, I came to a beaver dam.  The creek above the beaver dam was wider, deeper, and less canopied.  And I thought that it would be an excellent spot to be on a warm evening in late May or all of June and early July.  And that stretch above the beaver dam is what I’m thinking about right now in a decidedly more inspired mindset than I had before I went fishing.  I will be there. 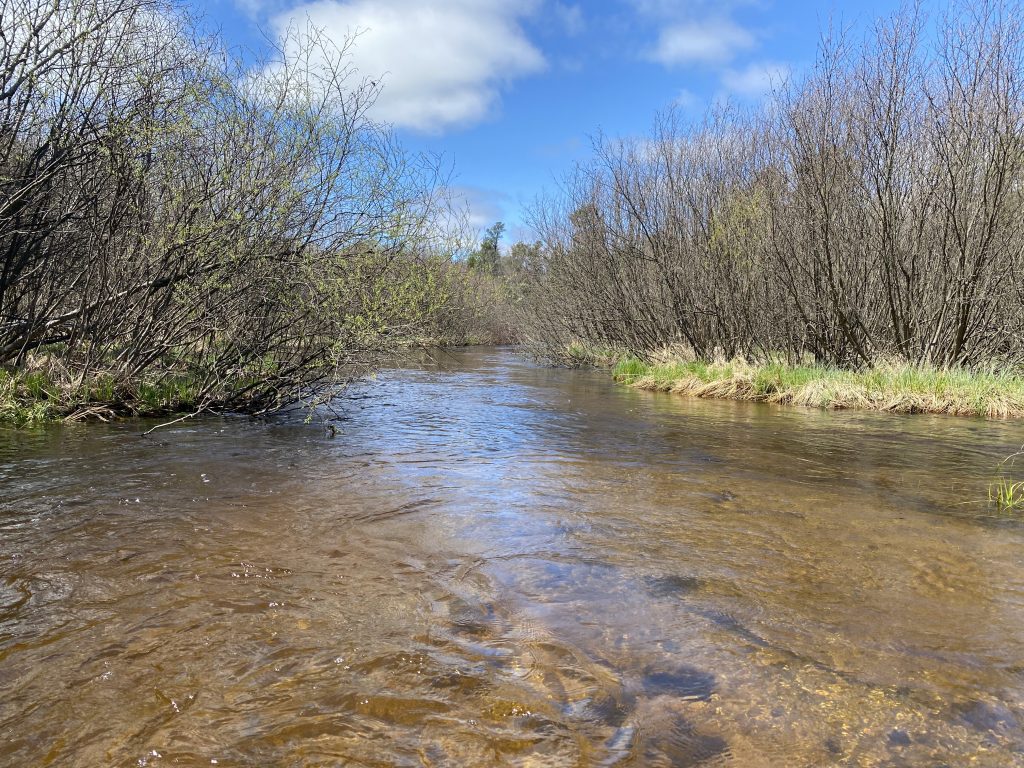 And now I’m excited again.  The light hendricksons (or #16 sulphurs, if you prefer) are hatching on the South Branch and, I’ll bet, on the North Branch as well.  They are mixing in with the last of the hendricksons, the mahoganies, and, on sunny days, the black caddis.  We are ten degrees shy of spinnerfalls, so the best of the dry fly opportunities will be in the middle of the day and later in the week (I’m assuming, I hope correctly, that Friday’s rain won’t fall faster than the rivers are dropping).  Mix in some streamers and some nymphs.  All three branches are more or less wadeable.  It’s not great.  But it’s also not bad. 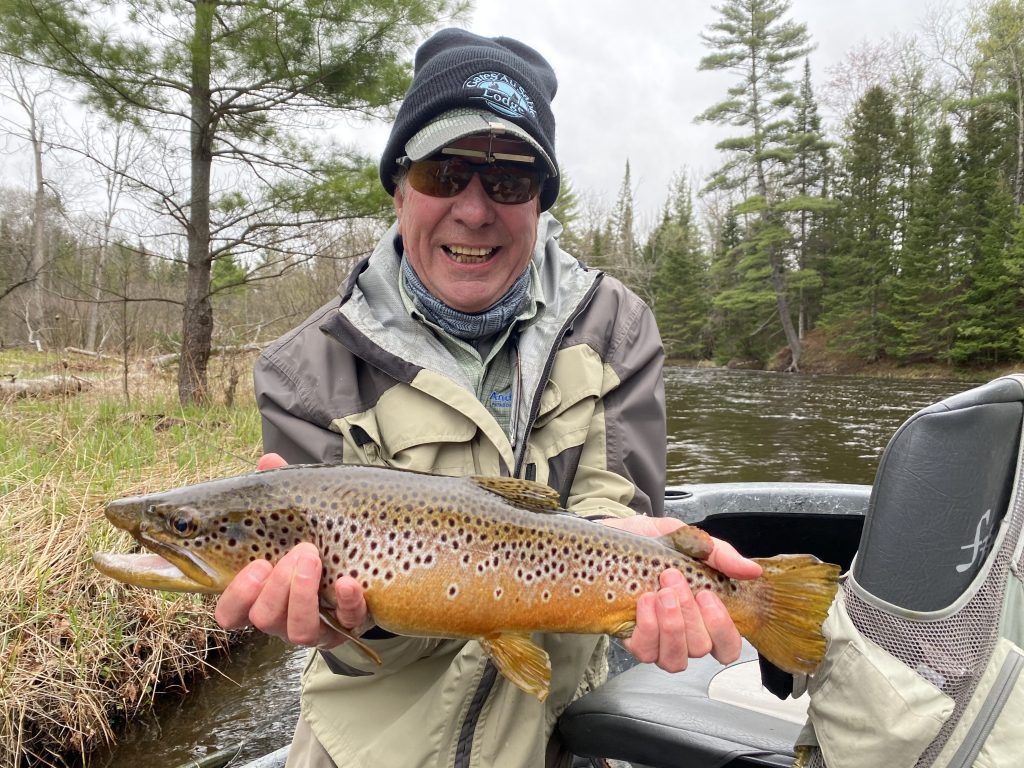 We are what some folks consider “between bugs” but I find that to be a mischaracterization.  If anything, we are headed right into bugs.  We have a few big hendrickson spinner flights left, whenever it warms up.  But what anglers can expect this weekend is variety.  One day might be a caddis day.  One day might be a mahogany day.  You might find a good half hour of hendrickson fishing.  You might spend your time fishing streamers, or hop around between pools with a nymph rig.  My overall advice is to not sleep on May, be it 50 degrees or 70 degrees.  If I had to choose one month to be in Michigan, it would be May.  There’s something to be done every hour of daylight (okay, on those cold mornings, that something is drinking coffee) and the rewards for going up a creek, or just to your favorite river pull-off, are almost guaranteed.