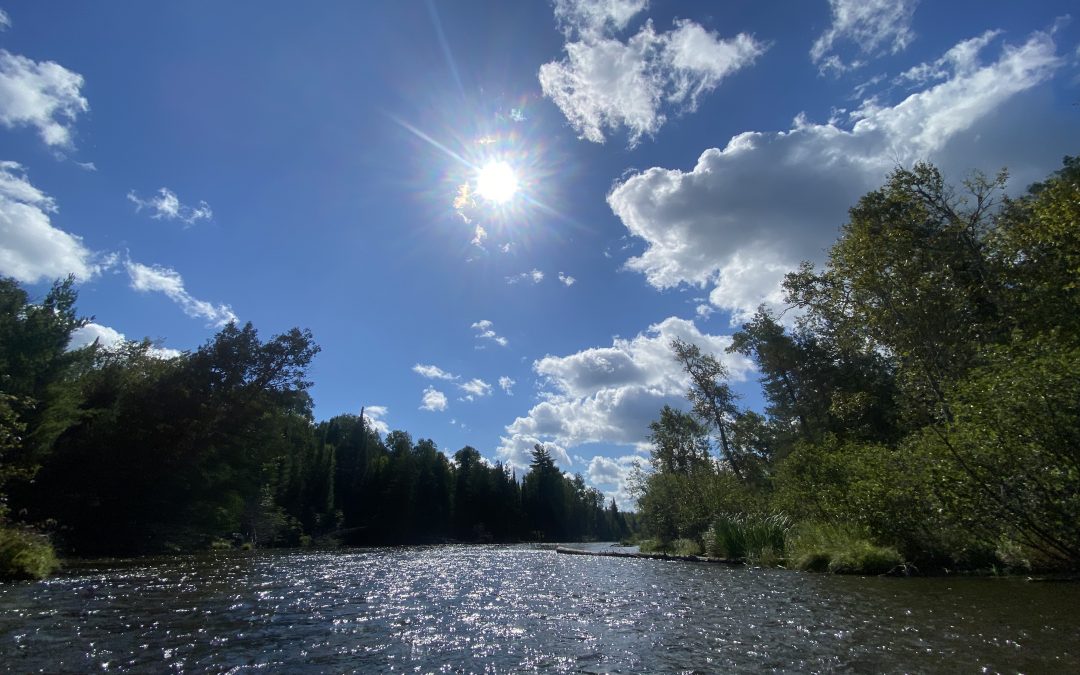 A huge weather change has resulted in one immediate positive:  On Monday morning, it was cold enough for coffee to taste wonderful, as opposed to necessary.  The immediate negative was that Monday was tough trout fishing.  That was the day my oldest and I had to fish.

We loaded the canoe and went to a favorite brook trout stretch.   My goal was to sleep in and miss the tricos.  Failure: We hit them head on.  It was cool, breezy, and bright.  The trout were in pods.  The river was crystalline.  The flies were very small.  The tippets fine.  The leaders long.  I normally love this type of thing.  But on Monday morning, I wanted nothing to do with it and the trout wanted nothing to do with us.  In one big flat, three or four pods of trout were rising.  I pushed the canoe way over into the weeds.  We put on our super soft-foot sneak.  We got on our knees.  And then our target pod quit rising.  And, below our target pod, the other pod quit rising.  And, without even making a cast, all the pods quit rising, one after another, the one pod being just close enough to, in fleeing, spook the other.  Bad dominos.  The big flat, and its coating of tricos, had gone silent.

We let the tricos die down and tied on a Patriot with a microscopic bead head.  Holden fished as we floated, working way out in front of the boat, and…there!  A trout.  A small brown.   On the tough days, even a dink is a cause for celebration.  Further down, he found another.  Now it was windy, and patchy clouds.  The glare was bad enough that the Patriot was tough to see, so we switched to a foamy bug and then, in succession, a series of beadheads…none of which worked.  But, a trout came up and splashed as the dry.  Okay.  Not bad.

We paddled through a long stretch of flat water, figuring that the best fishing would be in the riffles.  We spooked an eagle.  It flew one way, turned, and retreated to the big white pine it had left.  In doing so, it dislodged a single white feather, which hung up in the swirling wind, blowing all over the place, as I poled the canoe every which way trying to position us for a catch.  I felt like a very inexperienced outfielder under the bright lights, but I made the catch.  It was just a piece of down, really.  But soon it will be the wing on a Royal Coachman streamer.  We figured it was an omen. 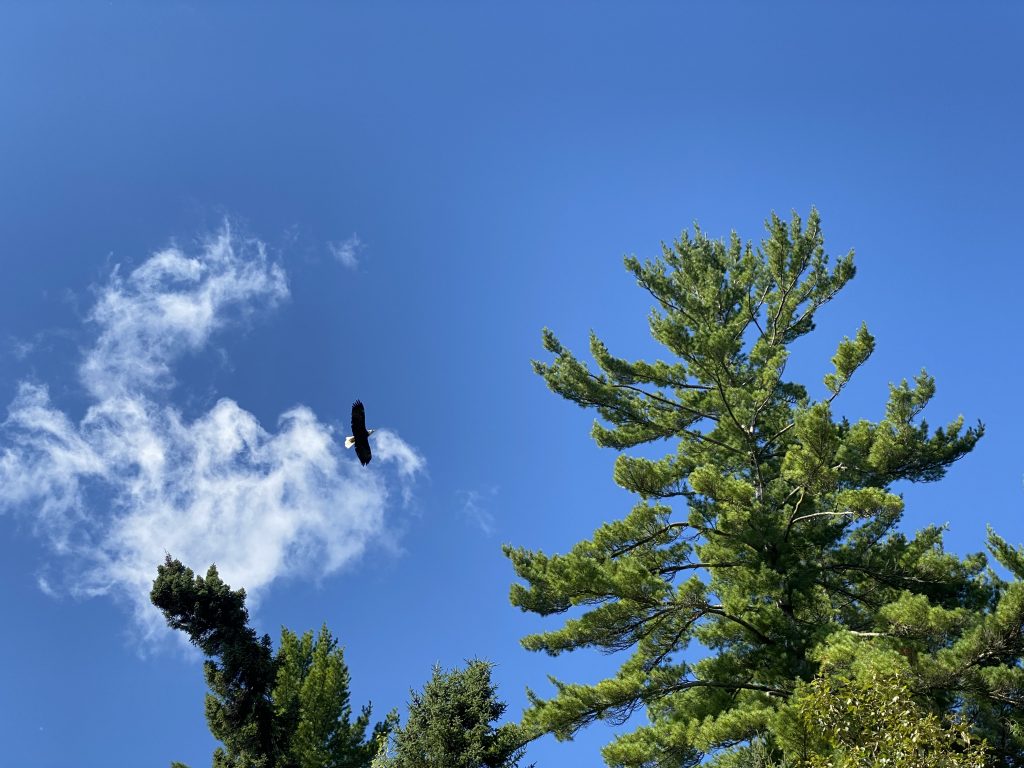 Down in the riffles, after another trout splashed at the dry, we cut off the nymph.  For a couple fo hours, the trout were willing to eat in the bubble lines coming off the wood structures that had been pushed into the corners of the river.  It wasn’t fast and furious, and one of the “trout” was a chub, but Holden met his first fish-count goal, then his second fish-count goal, and fell one short of his third fish-count goal, except, he reminded me, that chubs are fish too.  And I guess they are.

It sure feels great up here. Overnight lows in the low 50s (or lower).  Dew in the grass.  If we’re lucky, some afternoon clouds.  It’s the first big weather turn in months, and as the trout become accustomed to it, there’ll be some afternoon fishing.  There are multiple ways to fish, sometimes concurrently.  Instead of meeting each time of day with something different, it’s more like, if the trout are biting, take your pick.  This could mean fishing the dry, or a small streamer, nymphing, or swinging soft hackles (this is THE time to swing soft hackles).  There are only a few events left this eason that require single-mindedness:  the afternoon olives, the morning tricos, the enigmatic flying ants, and the white flies below Mio.  Otherwise, the trout will be on a (very cautious) hunt for food while also balancing their seasonal urge to move toward their spawning gravel. 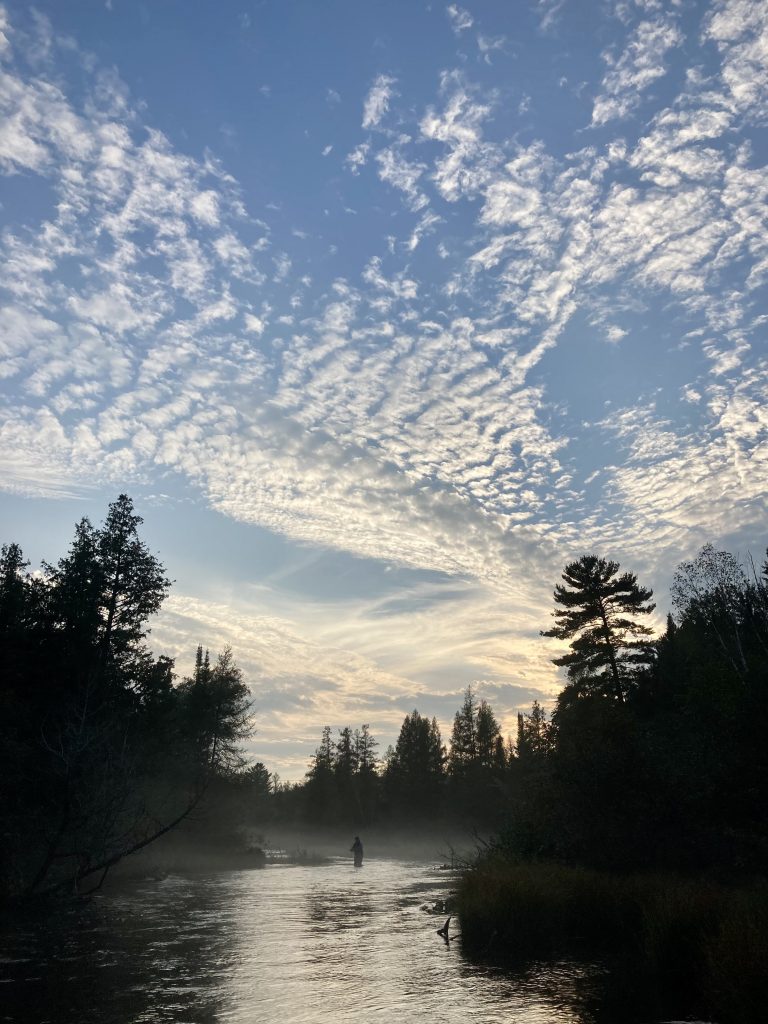 The kids are back to school.  The woods and waters are quieting down.  And River Cleanup is coming:  September 11th…and more details below…

Special Note:  We need volunteers, specifically volunteers to help us plant cedars below Mio on cleanup day, September 11…   Meet at the Comins Flats landing at 9:00 a.m.  If you are able please contact Tom Buhr at [email protected]  or 989 745 4957.  We’ll be starting early there in order to get folks back to Gates for the BBQ.  Wearing boots is suggested as the ground will still be damp at that hour. Please bring small hand tools and post drivers if you have them.  Water and gloves will be provided. Cages have been assembled and placed on location.  It should go very quickly! 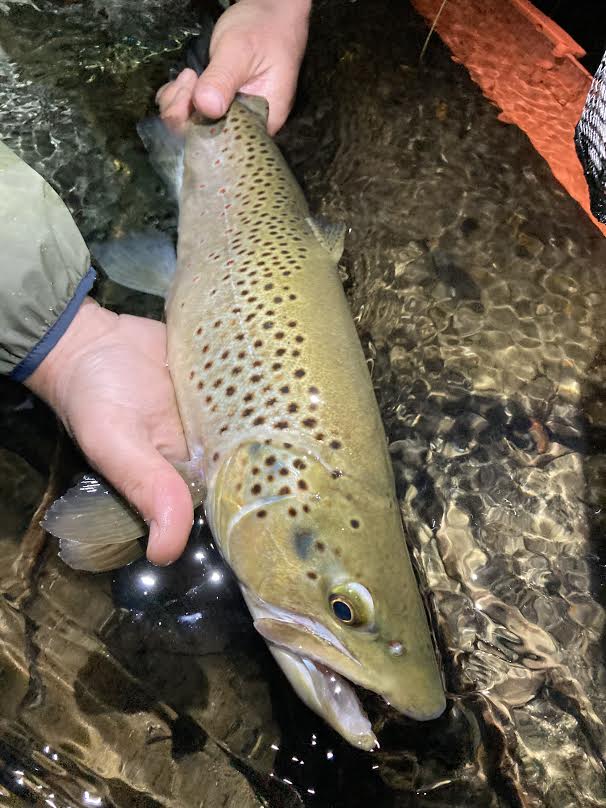