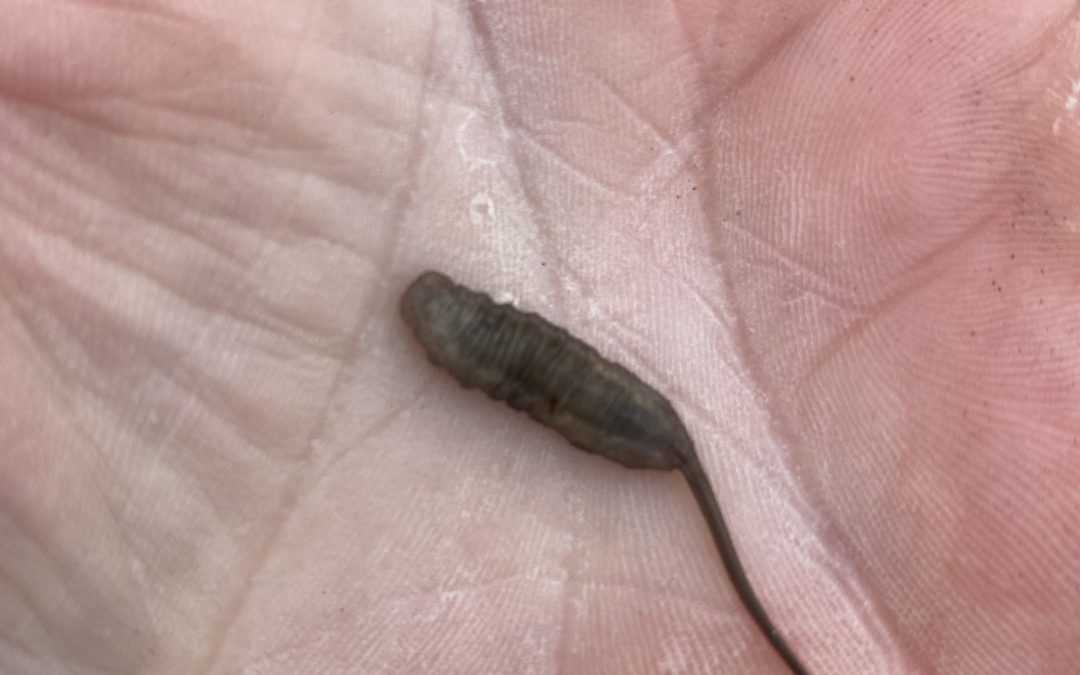 Yesterday, while returning my streamer to me — which is what winter streamer can seem like — I snagged, or more accurately, accumulated, this thing.  It looked like what a mouse fetus would look like if mouse fetuses were aquatic.  I thought it was dead but it moved.  “It’s alive!” I yelled to Greg.  It was a grub of sorts, with a long pliable proboscis that looked capable of stinging.  My first thought was that perhaps this was not only common, but of importance to trout.  Could it be imitated?  How important was the tail-thingie to the trout?

It was an odd float down the South Branch.  Trout?  We caught ’em.  There was the one fish that ate on the swing-out with a copper and yellow streamer.  That was with the sinking line.  My first turn I moved four, landed one.  Greg moved two on his turn.  Then I pitched a blank, and Greg followed with a blank.  The water was high.  Air temp 30s.  Windy.  It seemed like sinking line conditions, but we switched to floating lines and jig-styled flies and we landed six more trout, most in the typical late afternoon flurry.  The floating line makes mending and holding the fly near cover easier.  Cast, mend, strip, mend, strip, mend, etc.  Did it make a difference?  Well, it seemed it did. 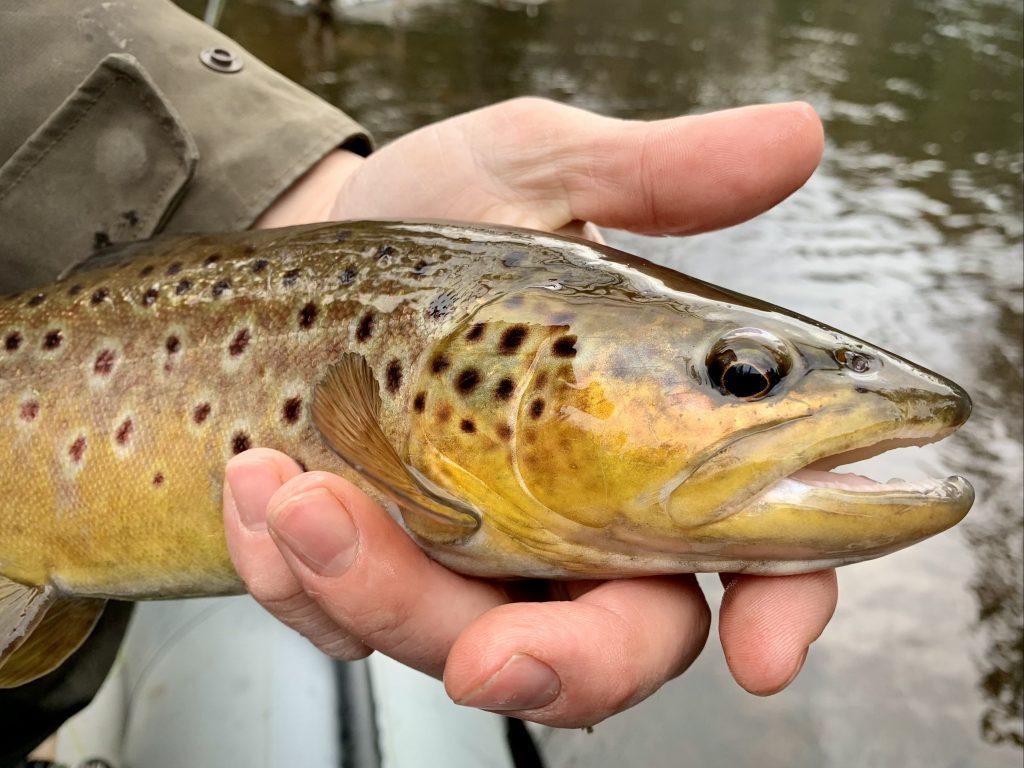 There has been an irruption of pine siskins and they were all over the bank-side alders.  I’m a sucker for these birds.  I first learned about them one winter up in the board room.  They would be on the railing a first light.  We’d be up there drinking coffee and Rusty’d be like “birds on the railing.”  We’d get thirty or forty of them at a time on the railing of the board room.  Since then, I’ve had an affinity for pine siskins.  They move in flocks.  Any bird that stays up here in the winter is a good bird.  This picture doesn’t do the coolness justice. 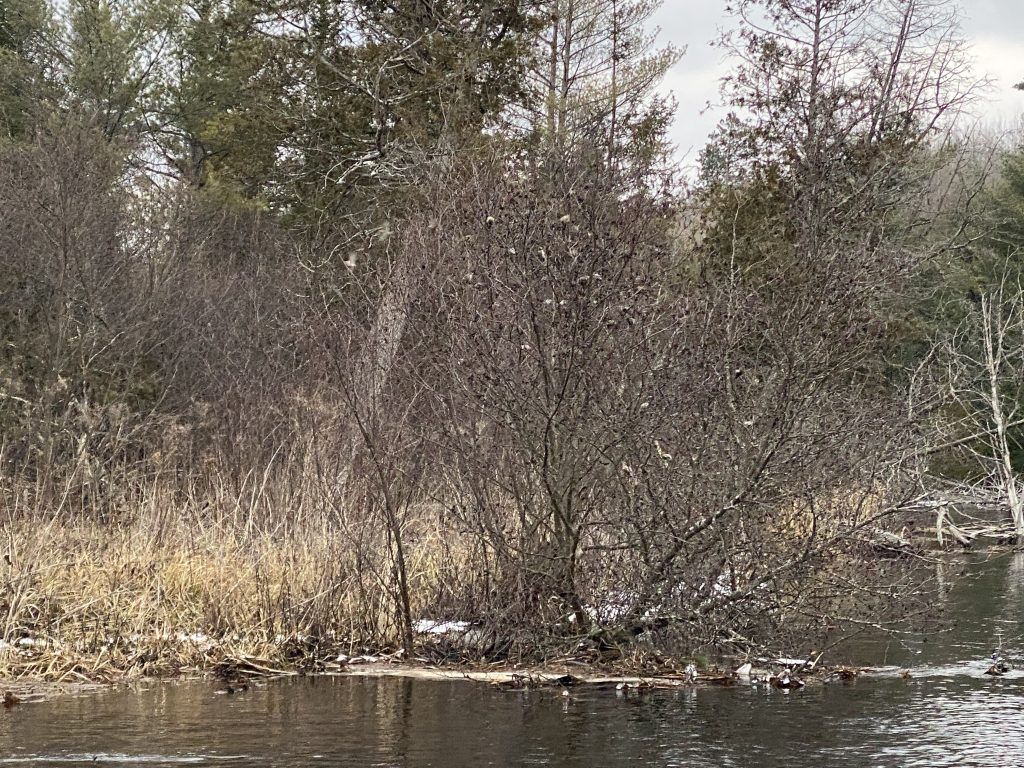 Birds in an alder

The weather though the holiday looks mighty conducive to trout fishing on the Au Sable.  I’ll be in Ohio, but the river is going to fish.  This morning the water level at the lodge was dropping.  Anglers will find fish on streamers and nymphs.  Black streamers, sure, but the stain in the water should encourage the angler to carry a more balanced streamer palate.  White, gray, black, yellow.  I don’t know — I’d have them all, just in case.  For nymphs, dangle an egg behind your favorite beadhead fly and the trout will be there.  Slow water, drop-offs, and even some of the thigh-deep runs.  We haven’t had any real cold snaps yet.  The fish are pretty well spread-still through the river system.

One note:  The river is blocked in some spots, as are some of the accesses, due to the recent windstorm.  Since we haven’t been able to float everything, make sure you bring your adventurous spirit!  Wakeley Bridge is getting a redo as well, and the river is wired off with buoys in that stretch.  Rumor is that you can get through it with a boat, but you can’t get through it easily. 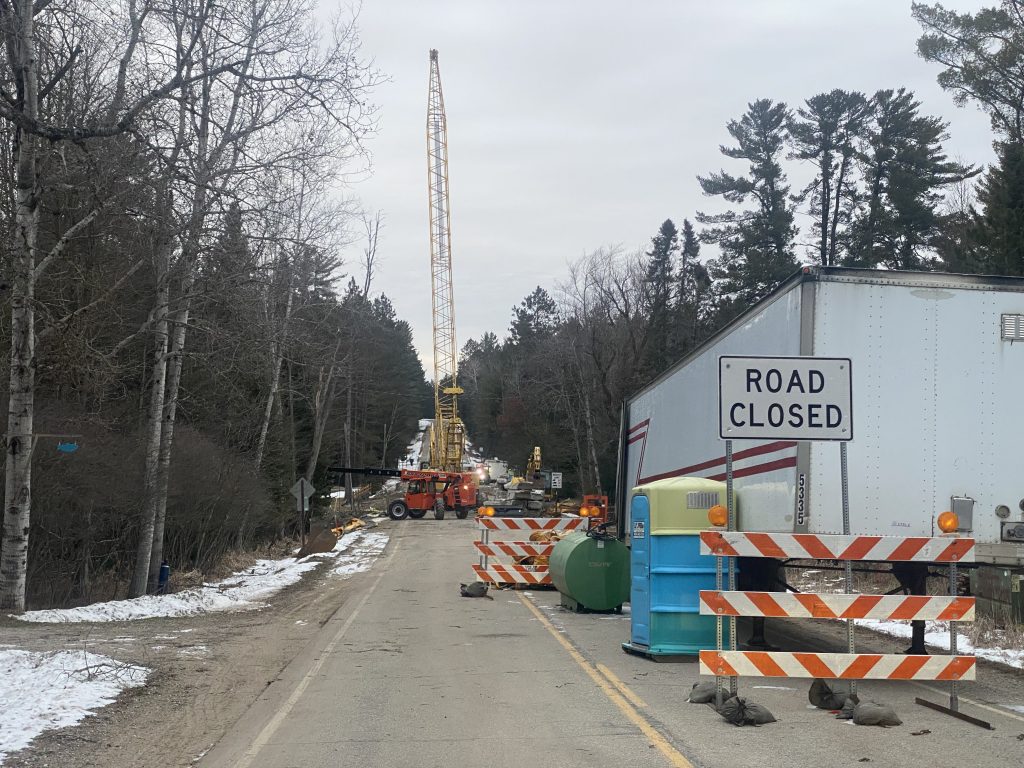 From all of us at Gates Lodge, thanks for a good 2021.  It probably wasn’t the year we all wanted, but it wasn’t that bad.

It’s been a tradition around the lodge to say Happy New Year on the Trout Opener instead of on January 1.  It seems sympathetic to the angler’s unique calendar.  Who wants to start a fishing year in the middle of winter?  That said, it does seem important to start the new year off with a trout, if only to eliminate the outside possibility of a full-year skunking (though that would be something).  But maybe the pressure put on catching a first trout should be outweighed by the manner in which it is caught.

I remember hearing a story, tale, or fable — I can’t remember what it was, exactly — about some fellow who made one cast, every day, from the same spot, with the same fly, for an entire season.  And while I would never do such a thing in real life, it sure is fun to think about that.  Stomping through the snow.  Parsing out the line.  Making one good cast, throwing in a mend or two, and then reeling it up and stomping away.  January 1.  Happy New Year.  January 2…repeat.

The river would be low and clear in the winter, but thaw would roil it.  The river would be full of winter, but the first new grass blades would be rising beneath the feet.  Cast.  Mend, mend.  Leave.  The tricks of the drift would be learned through monotony.  But the drift would change, of course.  Downstream mend in the slow water by the bank.  The summer weeds would bend the current.  When would the first rise to the fly occur?  Would this angler stumble into hendricksons?  Sulphurs?  Or would it be later in the summer?  Would a fish or two be missed?  After all, there’s a lot of importance placed on that one drift, and the tension would be something difficult to manage when, after 100 identical casts have been made on 100 wildly different days, a trout comes to the fly.  Would there be an epiphany awaiting this one-cast disciple, or just the feeling that life is best lived throwing multiple casts?  One thing for sure, I think, is this angler would know that one cast better than anyone has ever known that same cast.  Not exactly headstone material:  No one knew that cast like Bob!  But something to consider:  If we aren’t really fishing for fish, as Thoreau suggested, then what exactly are we fishing for?  For this fictitious one-caster, it would be the pleasure felt when his unique practice was intercepted by the unique practice of a trout.  I’ll never get there…but that might be sublime.

Have a great Holiday season from all of us at Gates Lodge.  Whether you celebrate this New Year, or the other one, make it a good one. 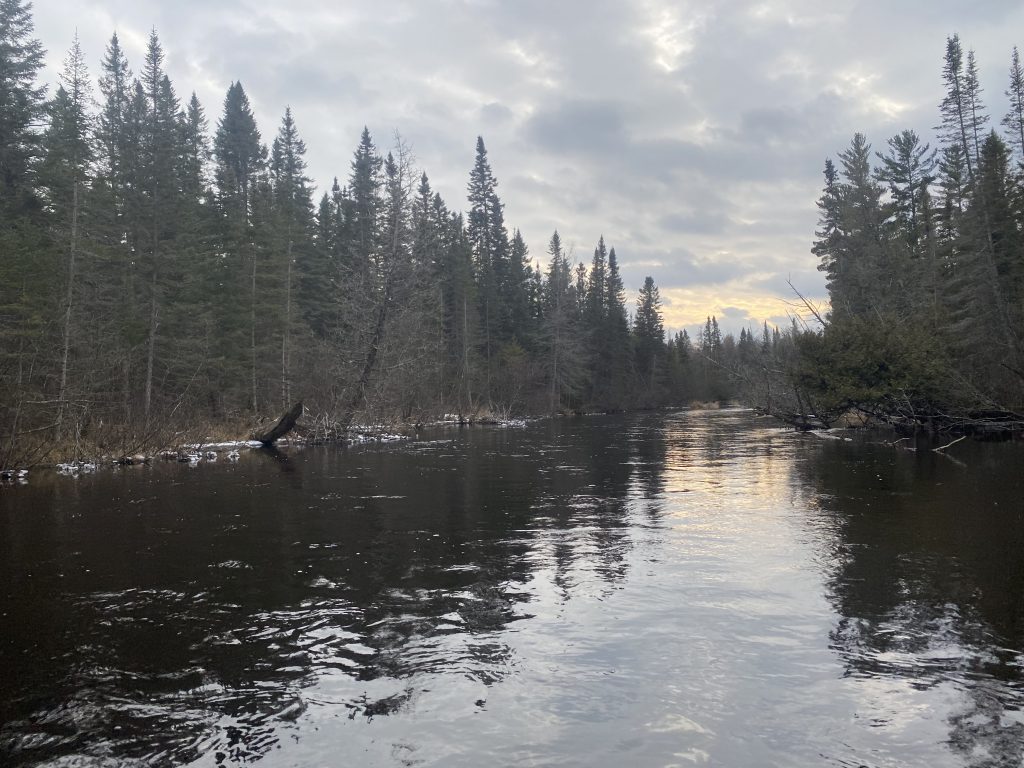