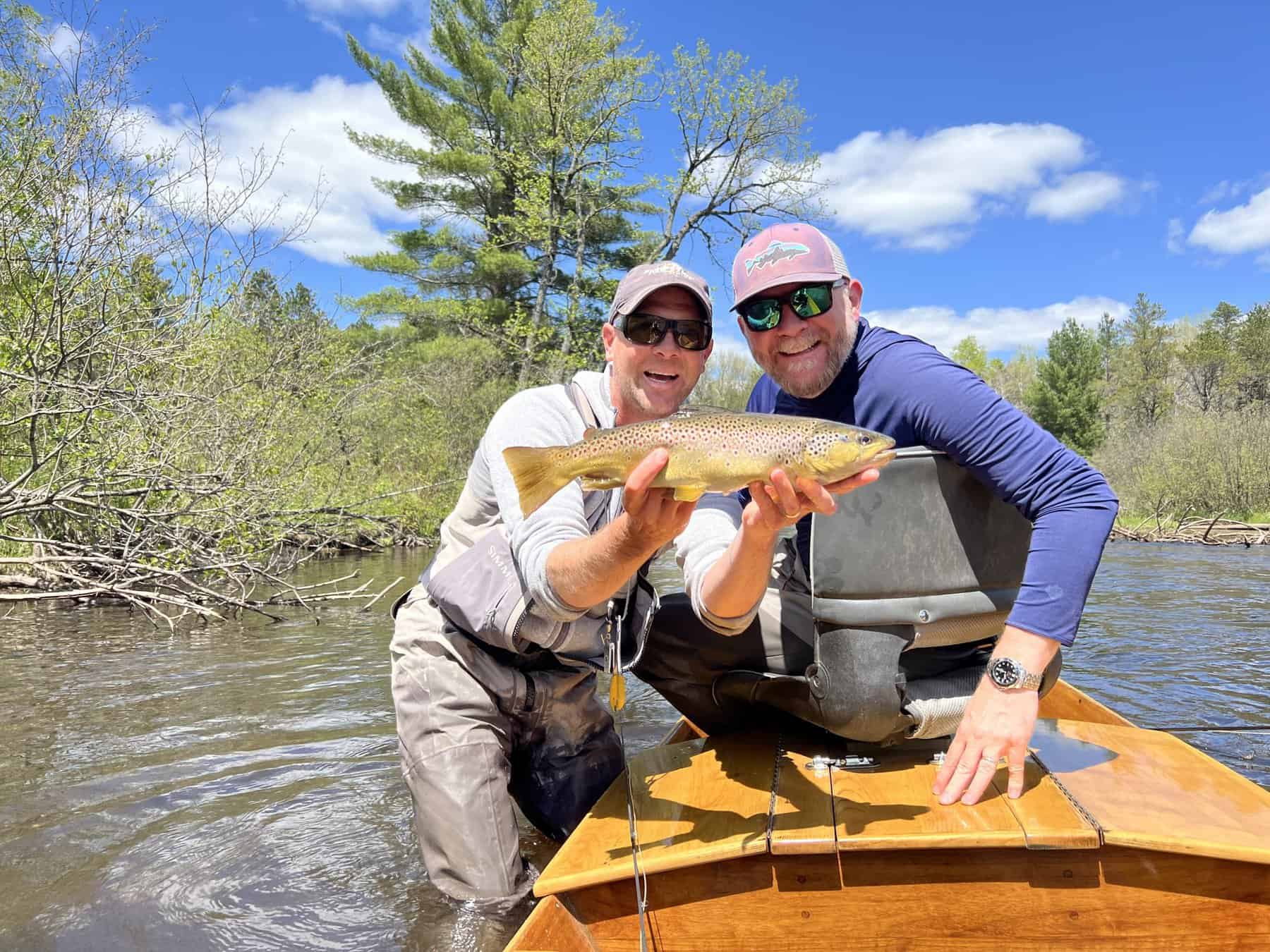 It’s the week before the brown drakes.  Yellow bug week.  Popcorn caddis (okay, cream and olive), two sizes of sulphurs, march browns, yellow sallies.  Tie on a Robert’s Yellow Drake, size 14, and blind fish.   If the fish are rising, fine tune a bit.   Yesterday evening the fish in the riffle we were wading were half on the caddis, and half on the sulphur.  We had to switch it a bit to get them all.  My oldest was working a pod of small, rising fish on a riffle drop-off.  We went through two flies (spinner, hackled caddis), catching one brook trout and getting refused by two.  A sparser caddis with a shuck then proceeded to catch three fish on three casts.  “I guess that’s the fly,” he said.  Because it was the caddis?  Doubtful.  More likely, it looked like an emerging sulphur.

It being a school night, we left the river before the spinners.  On our way through the woods, 50 yards or more from the river, we walked into a swarm of mating #16 light hendrickons.  At least half of the total bugs were conjoined.   There were thousands of them, all mating at head height.   What was their fate?  I don’t know.  Trout food?  Doubtful.  This week, we’ve had reports of bears, bobcats, otters, morels, sandhill cranes.  A customer had a nighthawk fly into his car.  A guide had a baby merganser hop into his boat and stay there.  Typically this is the week that the deer birth their fawns, often in the long grass beside the river.  The drakes seem to me the most fecund fly, and the drake week often the most fecund week.  Big heat waves, like the one we can expect next week, only exacerbate the fecundity.  Civil evenings, such as last night — when we responsibly left the river due to a youngster’s sleep schedule — are replaced by a quest that extends further into darkness and increase the risk of the other things happening.  Getting lost.  Getting stuck.  And, sometimes, just getting amazed.

The weather keeps passing through the perfect conditions on its way to imperfect ones.  What was a tragic tornado to Gaylord, a surreal and terrible experience, was nothing but a decent fishing night 20 miles south.  On it’s way to too cold, there was a good spinnerfall and a nice trout at last light on 6x. 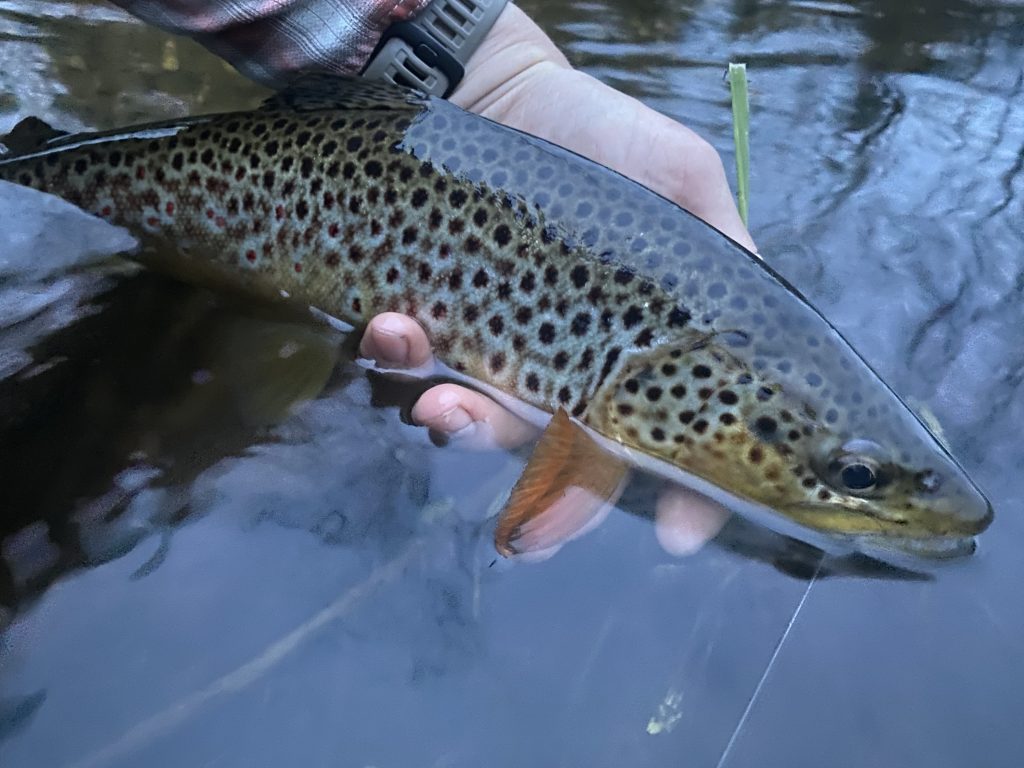 My point being, every two or three or four days, the weather will switch from one extreme to the other; and on its way from too hot or too cold, it’ll pause, for a moment at least, at just right.  And that just right has been pretty damn good.  But I can’t help but leave this May wondering what if…  But then, as a client said today:  My daddy always said that nature doesn’t give a f$#@!  And I’m kind of glad it doesn’t. Because if it was always perfect, and in May perfect would be 70 or so for a high, and a sweet 65 degrees at 9 pm, then that unseasonably cool and east-windy Monday wouldn’t have existed, and neither would the midday brown that ate a thrasher, pictured at the top of this report.  Nature’s uncaring means that we have to react to it.  It’s another way to look at the old cliche:  that’s why they call it fishing.  I like what that fellow’s dad said better.  Nature doesn’t care. 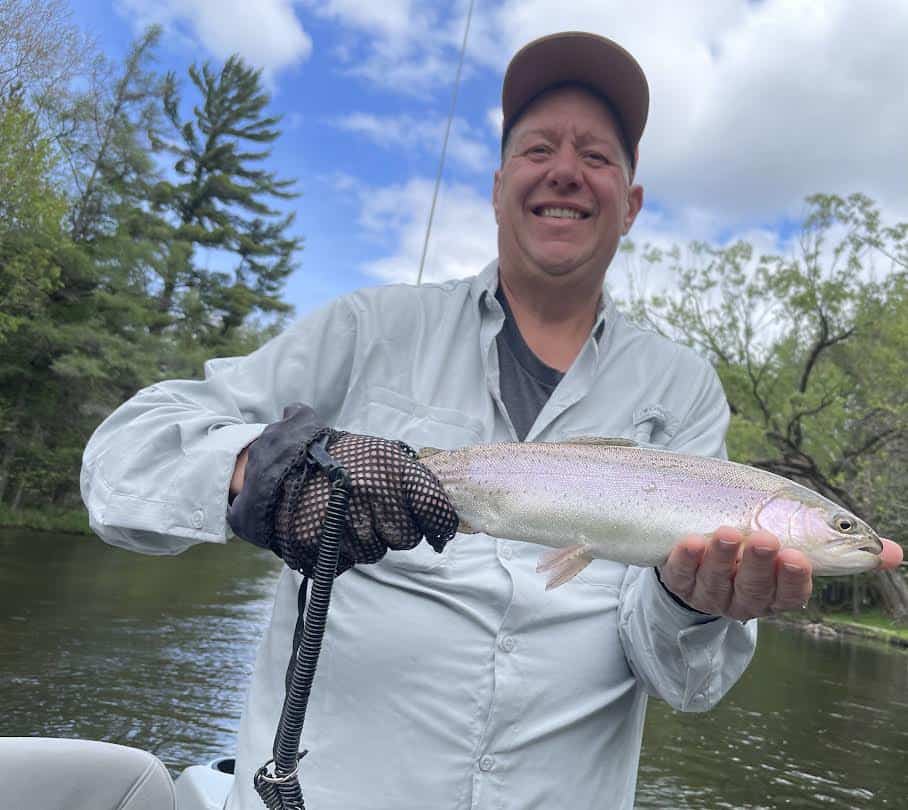 The rivers are low and clear and, once again, the rain we were promised didn’t happen.  This low and clear river thing is okay, for now.  But we hope for rain, somewhat desperately.  In the meantime, we are headed into a significant, week-long warming trend.  It’s going to pass by perfect right through the weekend, and if we have some still evenings, expect some great, frustratingly-heavy spinner falls mixing with sulphur hatches on Saturday and Sunday.  At some point in that heat, I believe the drakes will start.  Not sure when.  No one does.  And that’s the way it should be.