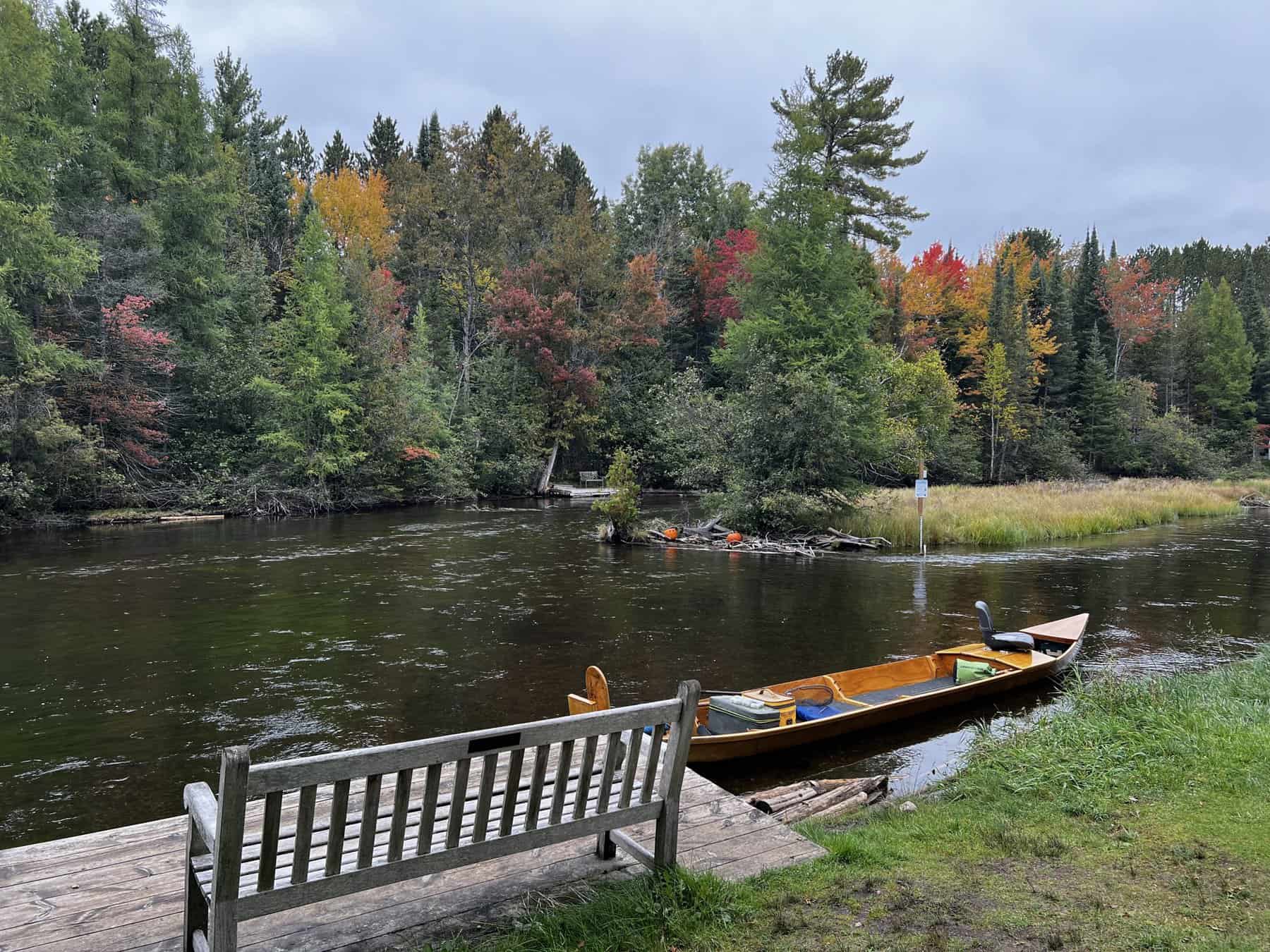 I’d been dying to get out for a proper fish and yesterday Sheets and I did.  We were hoping for wind and rain, for afternoon BWOs, for rising brook trout, and then some small streamer fishing.  The morning — when we weren’t fishing — the weather was perfect.  But, as soon as the boat was hooked to the truck, the clouds broke, the sun poured through, and golfers everywhere probably smiled…but we were pissed.  Once we were on the river, however, a few clouds blew in and that was just enough, and I mean just enough, to keep the bugs on the water long enough for us to have some brook trout fishing.  Fall BWO fishing is a low-water, crappy weather affair.  The trout feed in pods, and we would go hundreds of yards with hardly a rise, only to find a group of about twenty rising in some slick, difficult, tail-out.  We rarely managed to extract more than one or two trout before the pod quit.  A few times I got the boat too close and spooked ALL the trout.  A small Adams was close enough for most of the fish, but we hooked as many, or more, swinging the fly at the end of the drift as we did on the drag-free drift.  Given the number of naturals floating by uneaten, it seemed that most of the trout were content to feed just under the surface on the emergers, and that was fine with us.  Spey anglers call drag the “swing.”  And fish caught whilst one is letting the fly drag at the end of the swing are said to be caught on the “hang down”.  These phrases added some technicality and nuance to our technique.  A trout didn’t eat a dragging fly, it ate it on the swing.  The trout that was caught while I reached back for a piece of beef jerky wasn’t an idiot trout.  Nope.  It succumbed to the hang down. 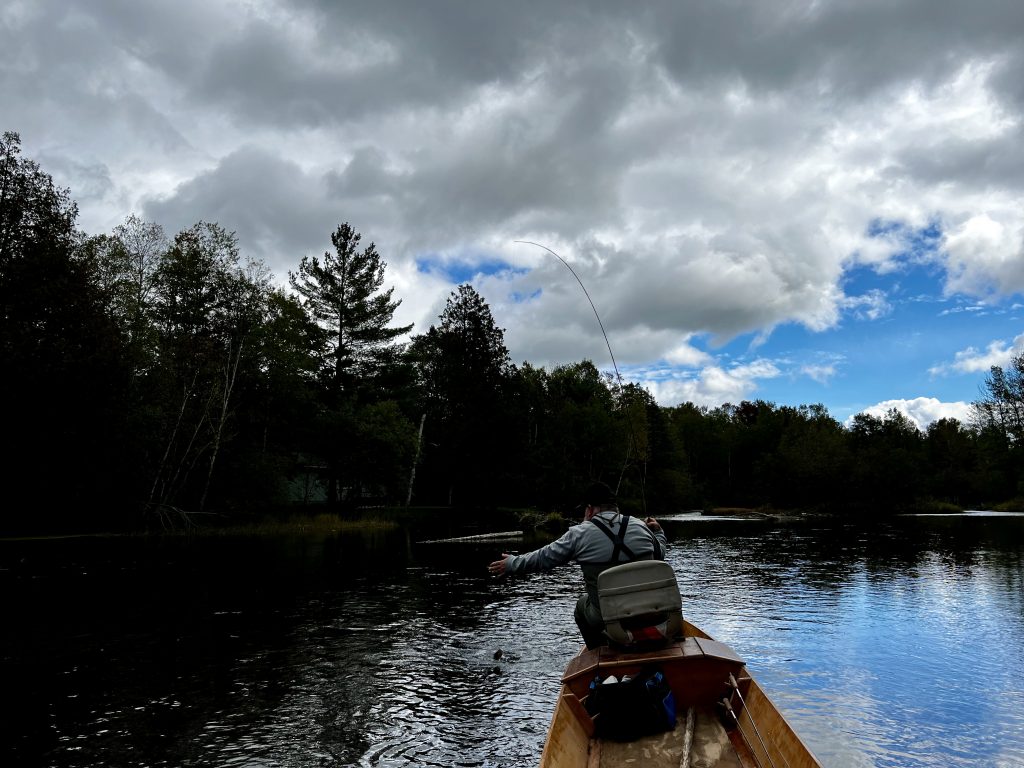 After the olives quit we switched to small streamers and found some better fish willing to chase.  The pre-spawn brook trout were on fire.  Most were nipping at the fly, sometimes two or three times during the retrieve.  One male, with blood red sides and bright white fin edges, sharked my fly a half-dozen times and, when I hung the fly next to the boat, swam with it for a moment.  It was a stunning fish, the most beautiful I’ve seen this year, but he escaped unscathed.  They were all pretty, however. 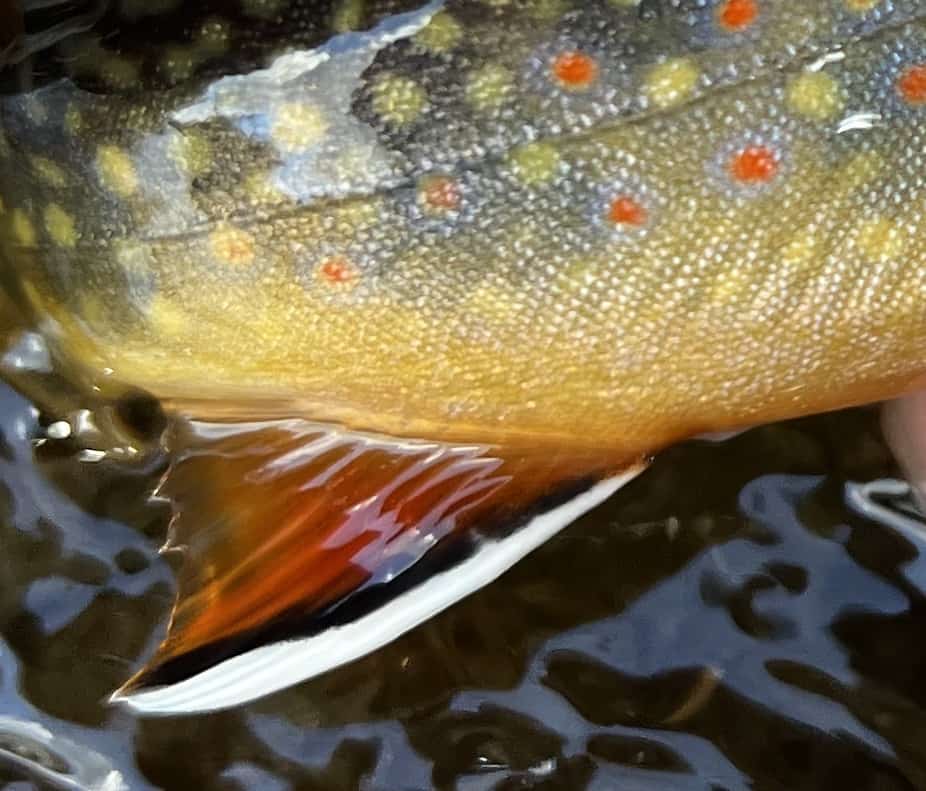 Near the end it became cold, wet and windy and we found a couple of better trout including a fat brook trout and a nice brown that ate off a gravel lip.  That night, as it is right now, the temperatures would drop into the 30s and it is more than clear that the season is changing rapidly toward winter  and this special little fall time is is nothing but the sunset of the season.  The best, and shortest, time of the year. 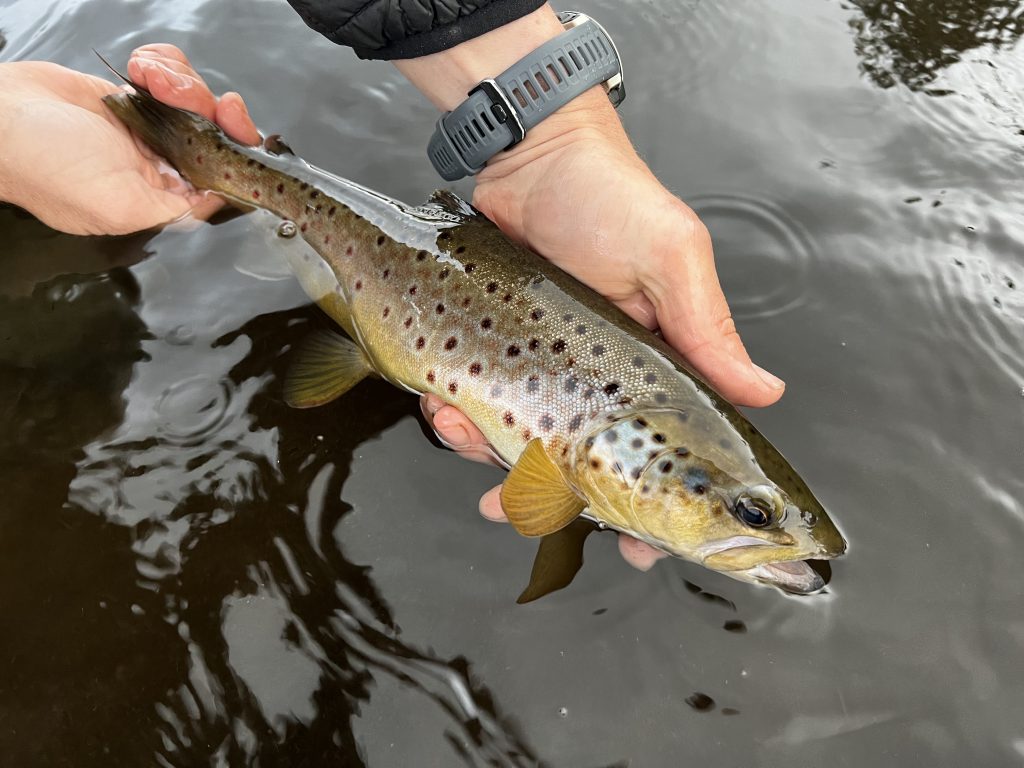 We have a great big Anglers of the Au Sable Fall Celebration coming up.  The tickets are sold out, and we are excited to raise some money, talk about habitat and why we need it, and discuss the future of the Au Sable.   If you can’t come and either see something below or would like a semi-complete list of auction items, please contact me at [email protected]…we will be accepting a limited number of phone-in bids.  Some of the highlights on this year’s banquet include:

Rusty Gates’ Au Sable Riverboat and Trailer:  If boats could talk, the stories this boat would tell.  In absolutely beautiful condition.  Donated by the family, who would like to see the boat continue to bring pleasure to anglers and benefit to the Au Sable.  INCLUDES STORAGE FOR THIS WINTER.  Winning bidders need not worry about transport or storage until the spring of 2023.
The Hex Hatch, by Kim Diment:  An original, very Au Sable-inspired work of art featuring an angler trying to crack the code of a half moon hex spinner fall.  A print of the original is hanging in the restaurant at the lodge.
Wanigas Rod and Orvis CFO Reel:  This rod was built by Art Neumann himself and given to his friend, the owner’s father.  This is as Michigan as it gets, and both rod and reel, though of a vintage, are in excellent condition.
Lunker Structure Brown, by David Ruimveld:  On theme of our fundraiser, an original painting of a brown feeding next to trout habitat, includes a fly display of the life cycle of a brown drake.
The Cleanup Knife:  Made almost completely from junk found at THIS YEAR’S river cleanup, Nate Runal’s knives are beautiful and beyond functional and demand top dollar.  I’ve used his trout and grouse knife this fall.  It is the best knife I’ve ever used.
Original Dickerson Hollow Built 7611 Fly Rod restored by Bob Summers:  This is probably one of the rarest bamboo fly rods on the planet, one of two hollow-built Dickerson rods known to exist.  It has been restored to near perfect condition by the legend Bob Summers.  It is a sweet little 7’6″ 3-weight that should be fished, enjoyed, and passed down.  You won’t see another one like this one.
Rusty’s Sea Kayak:  For some reason, Rusty and a bunch of his friends spent a winter building a splendid sea kayak.  It was auctioned five years ago, greatly enjoyed, and now returns to the auction block.  INCLUDES STORAGE FOR THIS WINTER.  Winning bidders need not worry about transport or storage until the spring of 2023
Other items:
Fly rod combos from Sage and Winston, rods from Orvis and Douglas, art by Larry Cory, signed books from the Joe Humphrey’s library, a Founders Brewing firepit, gear and fly selections from most major fly fishing companies, guide trips from all over the state and beyond, vintage graphite and bamboo rods (from Orvis, Winston, Thomas and Thomas), a special edition Renzetti vise, signed books by Bob Demott, rare shadow boxes of Au Sable originals, a number of incredible fly selections, and, well, it’s a long list.
PHONE IN BIDS:  As noted above, because this year’s banquet is smaller, we will allow a limited number of phone-in bids.  These must be handled directly through me at [email protected]  Please contact me for pics, more info, or to talk about bidding procedure. 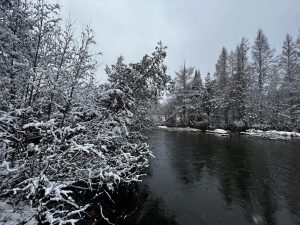 It’s a snowy gun hunting season for deer in Michigan.  After the first two days of the rifle season the number of hunters thins appreciably and you only remember that 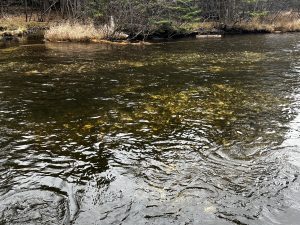 As you can see, there are a lot of fish spawning right now on the Au Sable, so much so that it kind of messed up our float today.  The 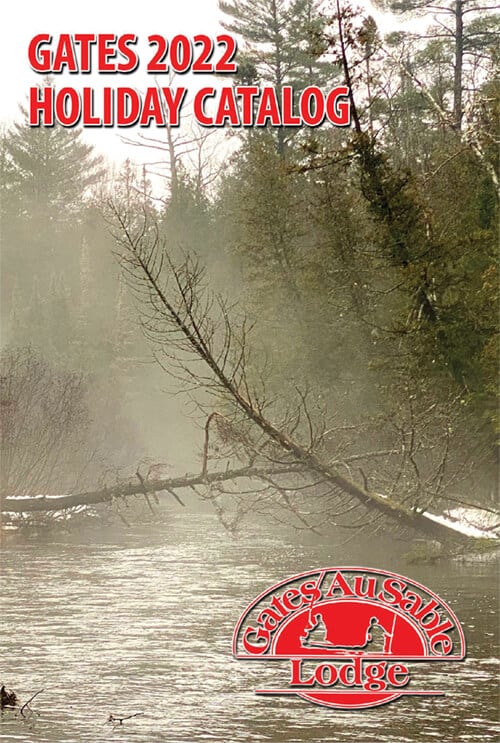