Sometimes, in conversations about the hex hatch, one tends toward the bleak apocalyptic prose of the infamous War of the Worlds broadcast i.e. major hatches are now spreading through the river system…I turned on my flashlight and was blinded by bugs…the fog has now made midnight navigation nearly impossible.  I will say the hex, for all their stubborn beauty, are like locusts. Remember, to 99% of the world they are at best a nuisance, and at worse simply gross.  We had a major spinner fall two nights ago and I thought it was beautiful.  And since you’re reading this, you did too, and that puts us in the same 1%. 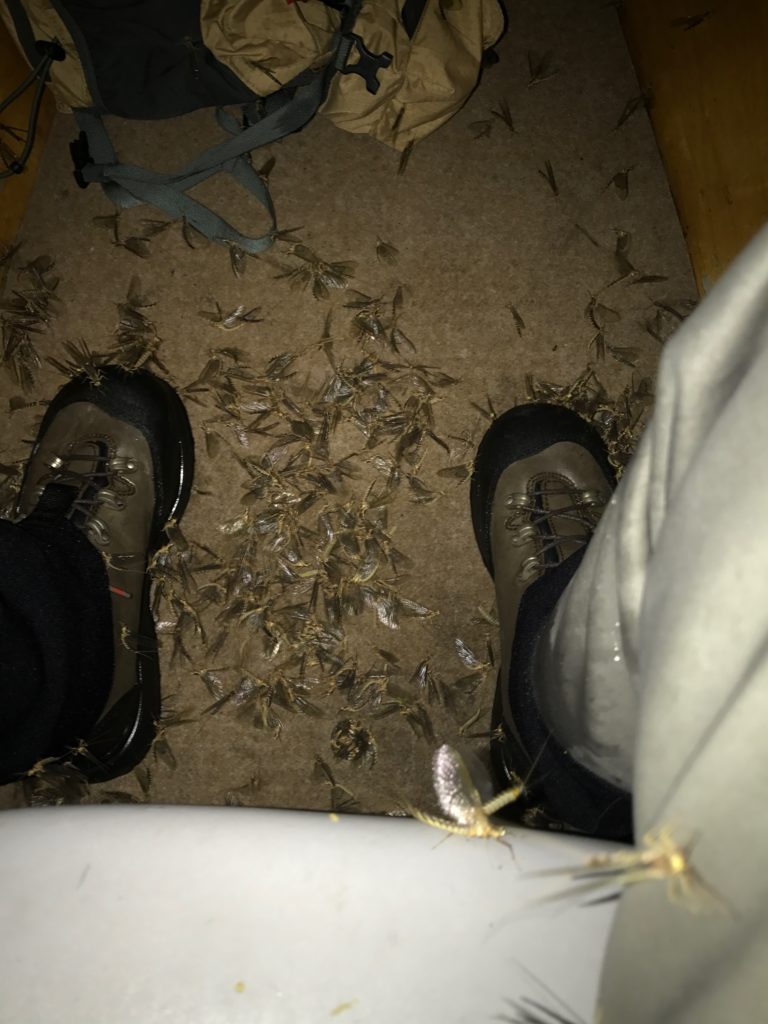 That night I was stationed down below my friends Deb and Colleen and I heard Deb work an absolute monster trout, hook it, and lose it to a log.  She filled the already hex filled sky with a litany of curses, followed by a fantastic long laugh.  It was awesome.  I snuck through the woods for the story but she’d found another fish that I thought sounded even bigger, and was trying to figure out if it was rising in front of the log across the river, or behind it.  It’s an expensive puzzle to try to solve.  I retreated to look for some trout to cast to and found some that I didn’t take a pic of.  So here’s a bigger one, that Keith caught:

Keith and Hoov have been tracking them down…

So, yes, major hatches of the Hexagenia Limbata are spreading through the entire Au Sable river system and onto the Manistee as well.  Aside from a stormy Thursday, the weather looks okay.  Mixing in with the hex are Isonychia duns and spinners, sulphurs, yellow stones, golden stones, a variety of caddis, the drunella olive (size 18), the green curse (also a BWO, but about a size 26), and many more.  But for most of the many anglers gathered in Crawford County from parts both near and far, their pursuit is centered around the big flies. 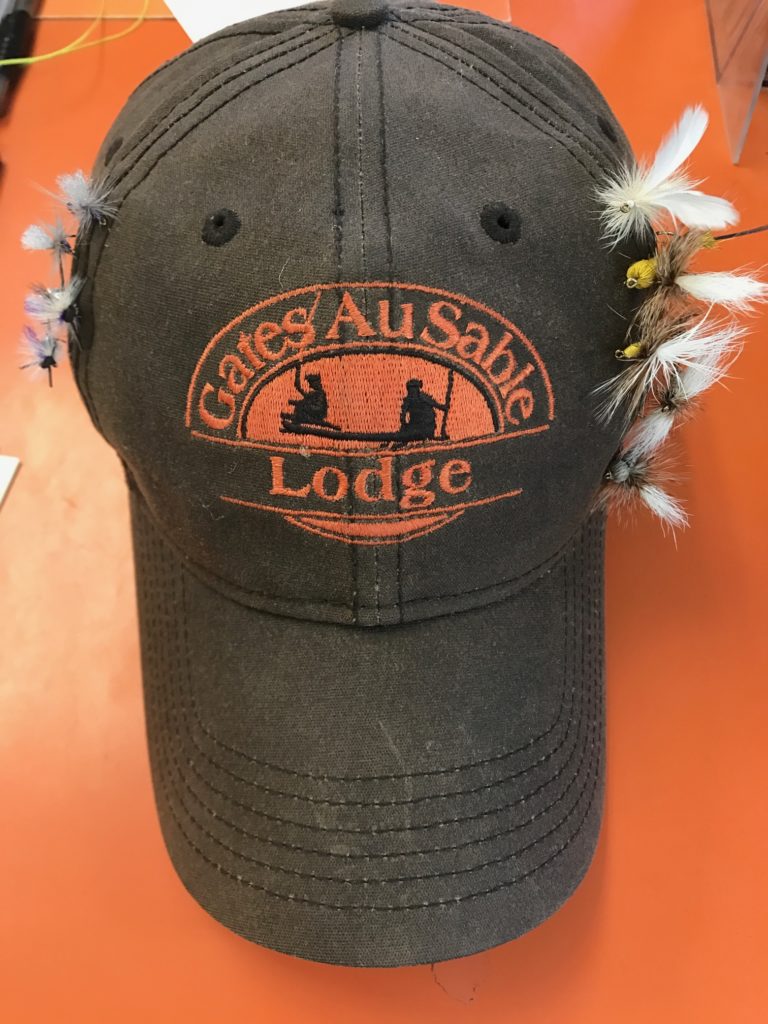 The theory about hex fishing is this: take a dark river filled with nocturnal brown trout and cover the surface in size 6 giant wiggling mayflies and the fishing is easy.  In reality, you take a dark river, fill it with logs and hidden seams and backwaters, scatter a few very old, very large trout in and amongst them, and then try to gauge the size of the trout (is this fish bigger than the one I hear rising downstream?), its location, its proximity to that nasty overhang, and how many currents stand to disrupt your drift.  Yes, it can be as easy as plopping out a giant parachute on 8lb test and catching a big brown trout.  Or it can be hard as fishing all night to a steadily rising trout and never touching it. 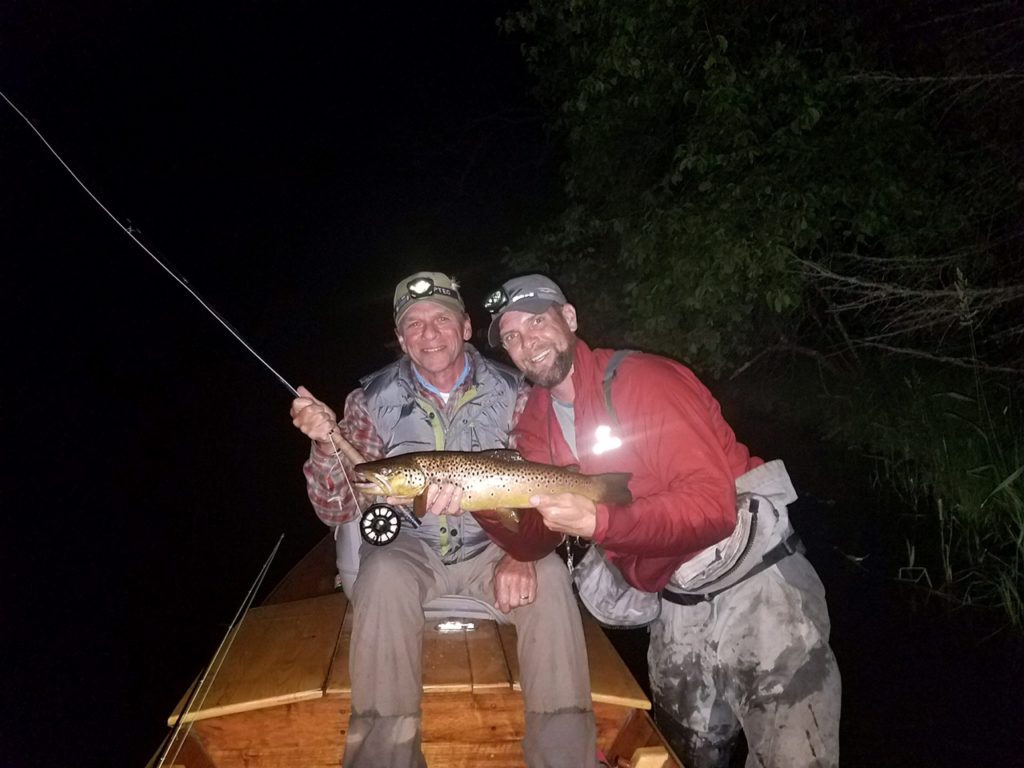 John had a great week!

The best parts of hex fishing have to do with the fun of the hunt, the way it forces you to stay still in the dark, and the enthusiasm of the many anglers here to enjoy it.  I saw a meteorite leave a perfect trail across the sky last night. An angler retrieved his fly from the mouth of a fish he broke off yesterday.  A very expensive rod/reel/line outfit was fished from the river and is in the process of finding its rightful owner.  In standing at the window of the fly shop and watching people just hang out in the parking lot, I watch the familiar motions of the stories, the silent hook sets, the bent rod, the way it went slack…all pantomimed perfectly to the appreciative audience at 2 pm as they sip what is to them their morning coffee. 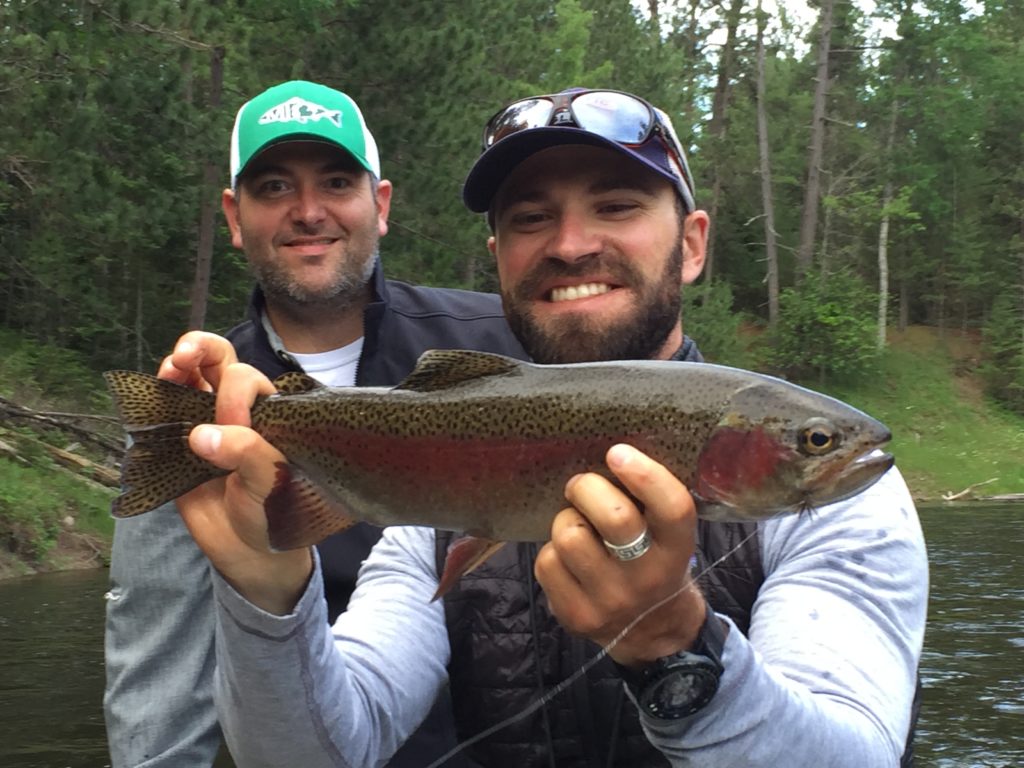 The river has been high this hex season and though it has dropped the last few days it could rise again depending on how much rain we receive tomorrow.  The warm rain will likely kick off a big hatch tomorrow night, and there should be good spinnerfalls throughout the hex water on the Au Sable and on the Manistee as well through the weekend.  Through next week and weekend, the hatches will become more confined to the colder water areas.  Stay late, and keep a smile on your face.  Use red lights to negotiate river traffic, and keep a sense of humor on the busy nights.  Enjoy what is, on the fickle Au Sable, an embarrassment of riches.  It only happens once a year, and it’s happening right now.