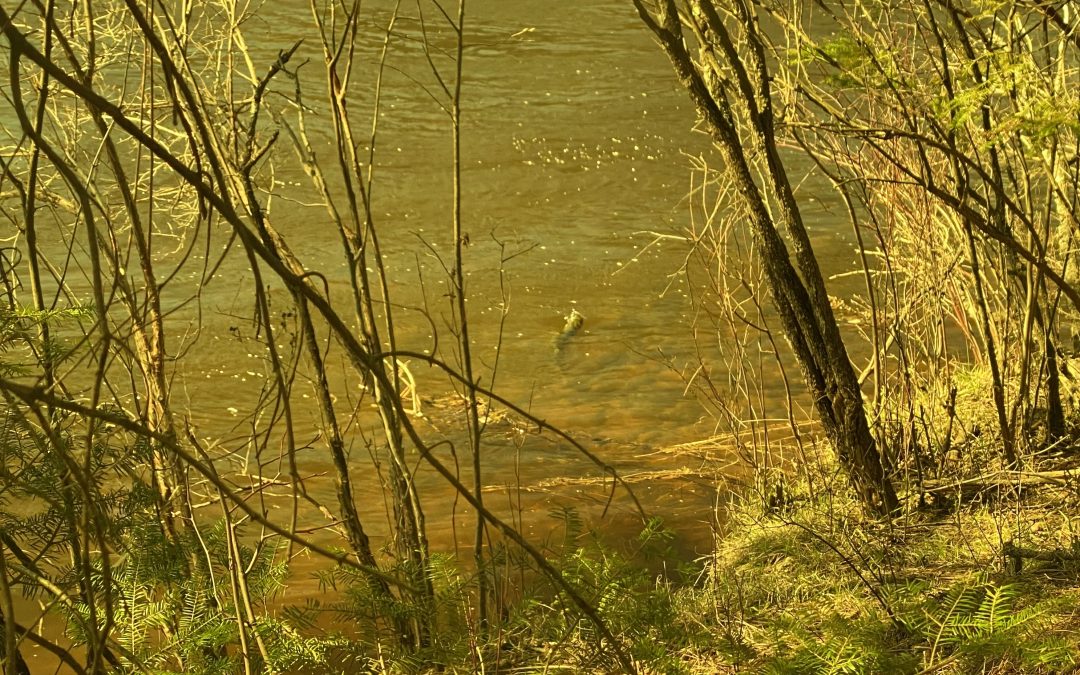 Over this cold and alternatingly snowy and sunny weekend, I stumbled onto a big rising trout.  I found it twice, actually, but I’m writing about the first time I found it.  It was a sunny and windy day and the hendricksons started hatching en masse around 3 pm and by 3:30 pm the water looked like this: 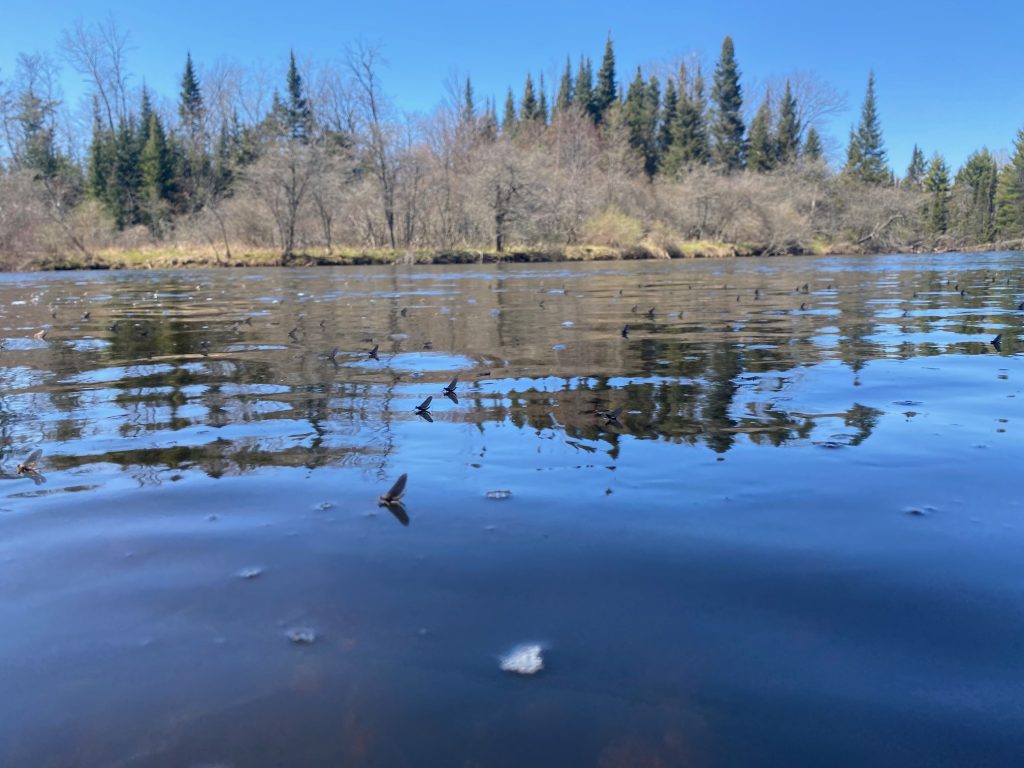 But as often happens when the skies are clear and the water temperatures are plummeting, it took a lot of walking to find a rise.  In fact, I left one spot, drove to another, walked way upriver, returned to the vehicle, went back to the original spot…all within an hour, all without seeing a rise.  This left me sweaty, scraped up, wearing several ticks, and pretty frustrated.  Then I decided to take another walk…and I came upon the trout.  It was sitting on a shallow outside bend in clear water and feeding behind a bush.  It rose in spurts, and very subtly.  It rose so subtly that it escaped the attention of two boats.  One that floated by just before I found this trout, and one parked about 80 feet upstream of the trout’s station.  This parked boat appeared to be working a different trout but it would be bad form to wade in and start casting.  It would also be bad form, I thought, to initiate a conversation.  Plus, what would I say?  “Mind if I cast at this big giant trout that’s rising right here?”   I felt like I’d dropped a hundred dollar bill out a two-story window of a downtown apartment and now had to sit and hope nobody saw it before I could go down the steps and get it.  For about an hour I just sat next to this trout and watched it feed.  Here is how it fed:

When the boat finally slid by they were staring right at the fish and couldn’t see the rise.  I know it looks obvious in the video, but two friends of mine floated by the same fish, doing the same thing, three days later…and this was after I told them where the trout was rising.  Being on foot has its advantages.

By the time I slid into the river downstream of the trout I felt like I knew the trout better than I’ve ever known a trout.  He liked to rise in threes.  Not all the time, but enough.  I figured if I could throw a cast a foot above the first rise, he’d eat it on the third rise.   The upstream bush and the tricky current meant it would be a short drift. There was a big downstream wind that day and it took me awhile to make the cast.   Finally I got a good cast but mistimed the rise.  “Just like that,” I said aloud, and repeated the cast, and he ate.  This made the whole sitting-on-the-bank-for-an-hour thing even better. 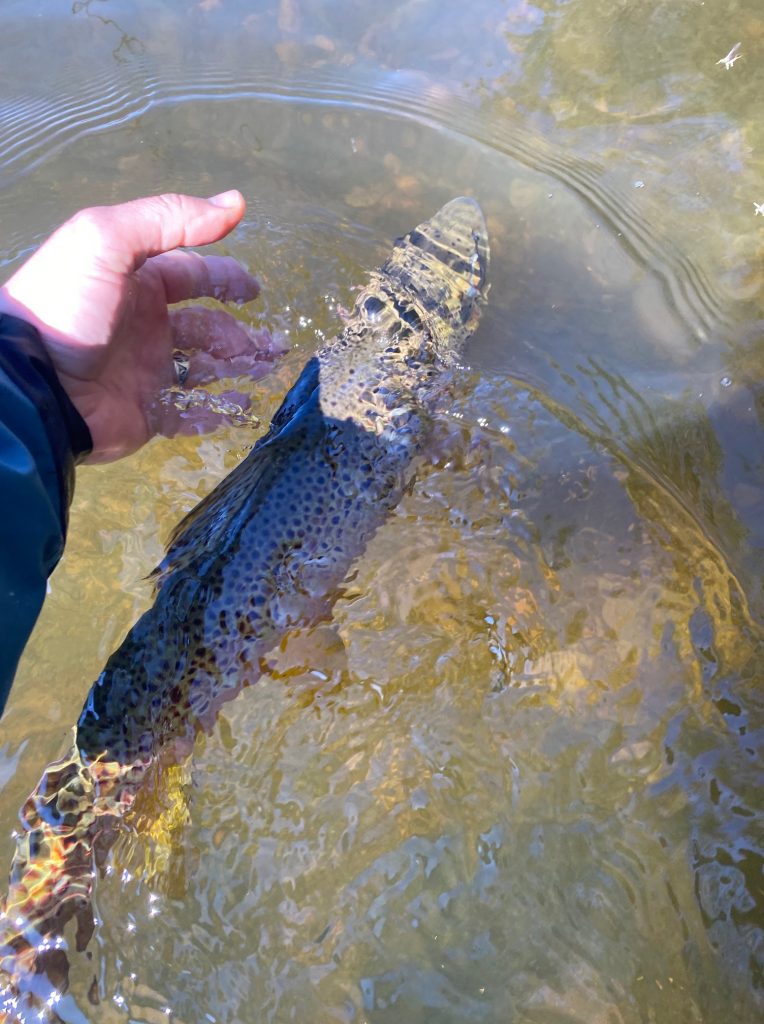 In other words, well, the season is here.  Hendricksons, mahoganies, black caddis, hendrickson spinners, Siphloplecton…and the bugs that will meet the forecast: light hendricksons, yellow stones, Borchers drakes, Mattress Thrashers.  The rivers are low and clear for this time of year, the water temperatures are on the climb, and we’ve been catching good trout on dry flies even when there hasn’t been a cloud in the sky.  Nothing has been stellar, other than the scenery, and the trout we’ve caught…which appear to be in top form in 2020. 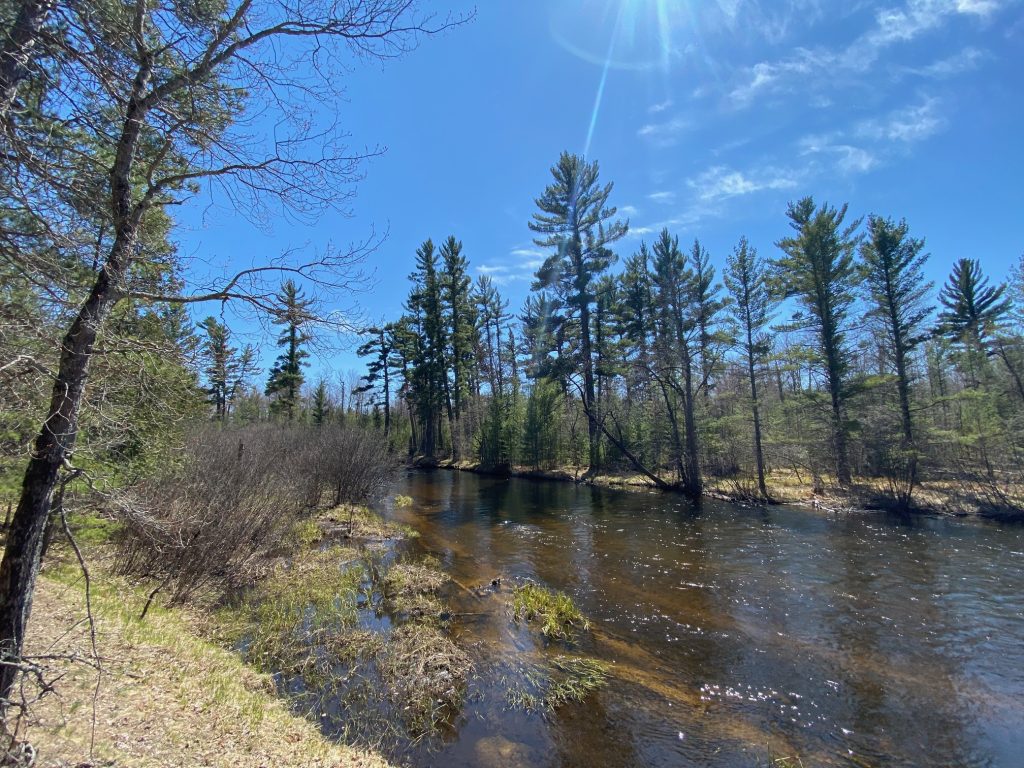 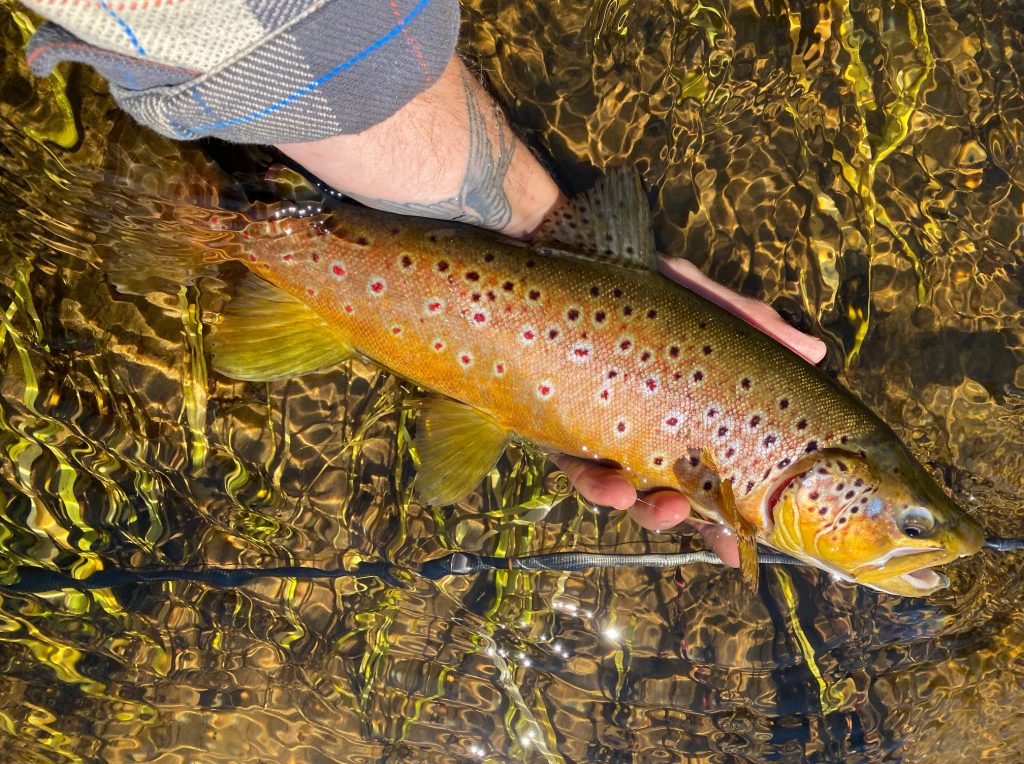 It was pretty hard to keep the spirits up this past weekend.  It was cold and crummy and it snowed, I think, five mornings in the row.  Of course, such May snowstorms would have been the big news in a normal year.  The storm would have had a name, etc.  Now it’s just a May snowstorm, kind of like the old days. There wasn’t much to do except try to enjoy it. 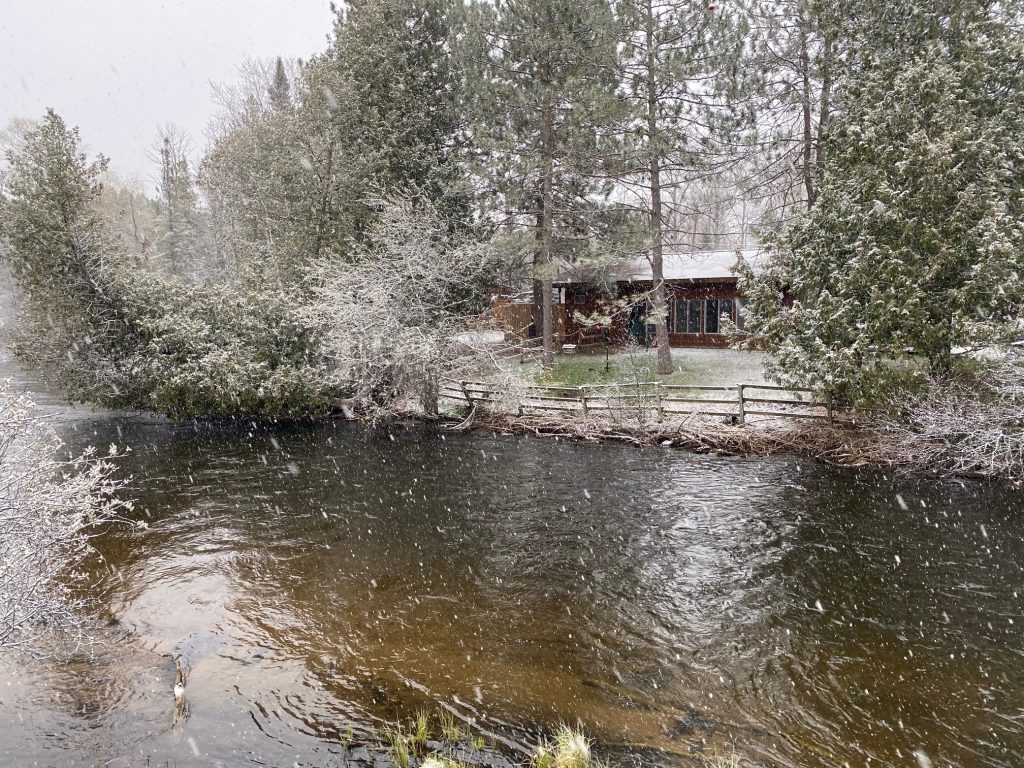 So that’s the fishing report.  It’s the start of my very favorite dry-fly time on the Au Sable.  Well, I love the drakes.  But nothing has the nuance, the daytime puzzling, the after-dinner spinners of the next two weeks.  It’s not consistent.  And maybe that’s part of the charm.  You may have to fish streamers and nymphs to fill in the gaps.  Or swing caddis through the noon emergence because the trout just won’t rise consistently.  You could see diving caddis.  Spent caddis.  You can have multiple masking hatches.  And, this year, a couple fine trout to cast at.  It’s not quite good enough to spoil you, and way too good to leave you disappointed.  I think that’s just about what an Au Sable angler expects.

We will once again be offering take-out food this weekend, including take-out breakfast sandwiches and even a few hot dinners.  Visit our weekend menu here.  Stay tuned to our two facebook pages for more details:

We are working hard to make it easier to shop and find what you want.  If the weather is nice this weekend we will have some great deals set outside the shop for you to look at.  We also have rods and reels to take for a test drive (and even have gloves for you to wear if you’d like), and we are still fitting people in waders and boots.  We are taking everyone’s health as seriously as we can, wearing masks, happy to wear gloves, and so on, and also really happy to be safely busy and helping people catch trout.  It feels great to even be partially open.

We are offering free shipping on all online orders.  Visit us at www.gatesflyshop.com: flies, leaders, tippets, rods, reels…most of the shop is on there.  Order for pickup or ship.  Here are some flies to consider having this weekend:

This shutdown may go on for awhile, so let’s wrap up the Shutdown Fly Tying Contest.   Sunday, May 17, is the last day to submit your entries.  We’ve had so many great entries, we’re going to give away 3 fly lines!  Winner to be announced with the next fishing report.  Keep cranking!  Here’s how it goes…

Winner announced at the end of the shutdown — May 1, or whenever.

We’ve seen some great flies so far…Keep those entries a’coming!  I’ll tell you what, the collective fly tying skill in Michigan is just unbelievable.  These are randomly selected from the many entries so don’t freak out if yours isn’t here.  I’m not the judge, anyway.  Well done everyone.  Keep them coming… 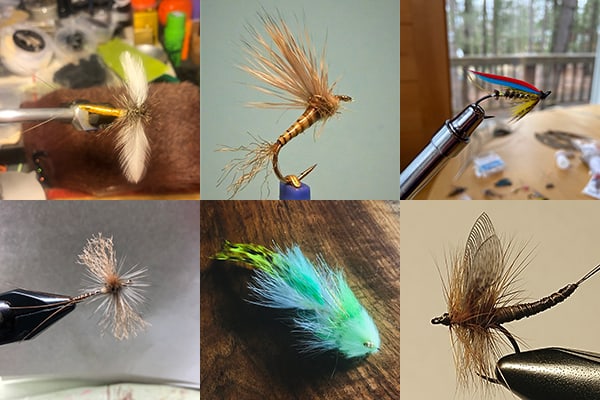 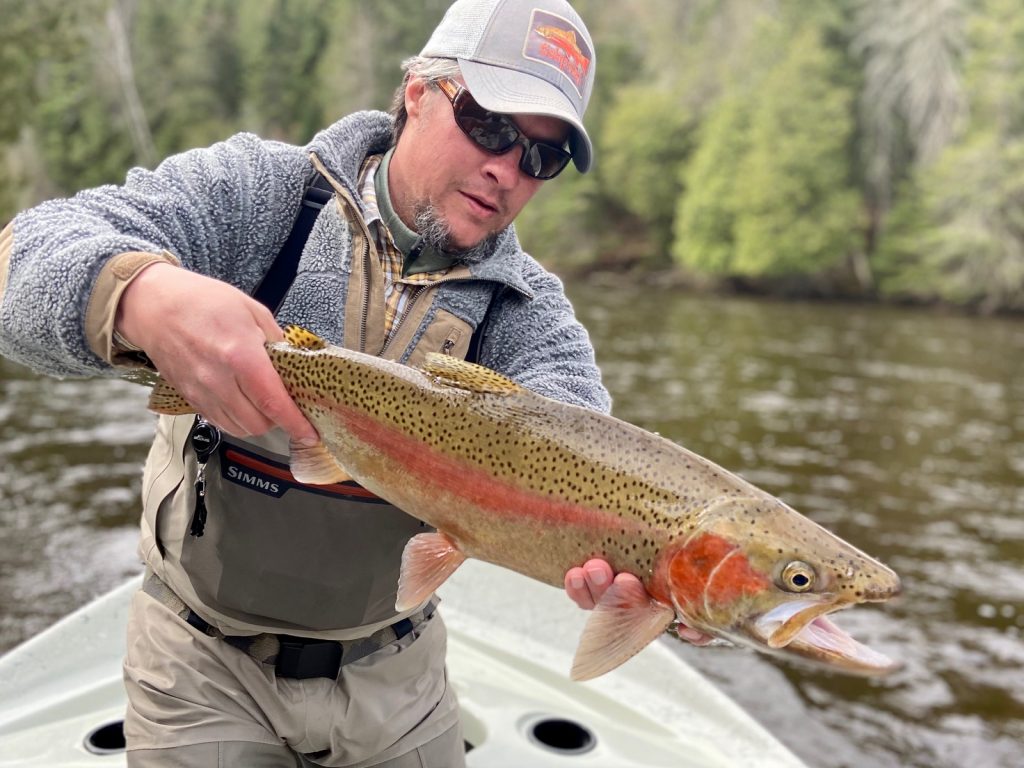